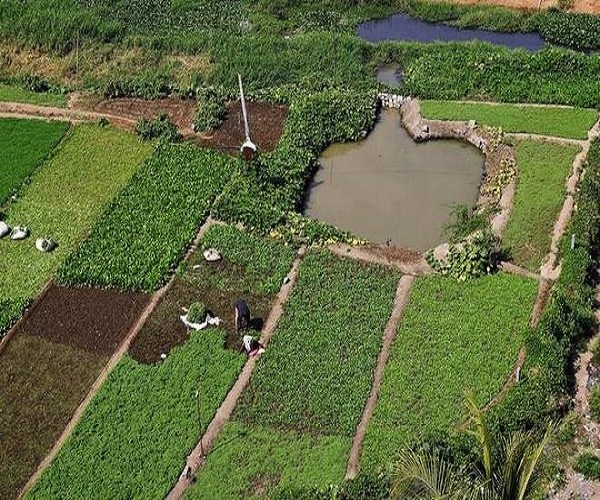 Many vegetables and fruits grown using water from highly polluted lakes and storm water drains in Hyderabad. Dark and filthy water circumvents the dry lake bed of Nalla Cheruvu in Uppal, meandering through a narrow channel, to gather pace while it empties into the River Musi on the farther end. At first glance, one could just ignore it as just another sewage canal that adds to the landscape of the centuries-old city.

A distant contemplation standing on the banks of Nalla Cheruvu would, however, reveal rows of vegetables planted and raised along the route of the canal, and irrigated, of course using the toxic water.

Toxins in tummy
Several synthetic pipes can be seen carrying the highly polluted water from the canal, aided by pump sets, to irrigate what would end up as food on someone’s plate the next day.

“We do not eat these vegetables as they are cultivated in filthy water. They go to the city’s market,” winces Padma, a daily wage labourer who works on the farm. Quite a few labourers can be seen working the fields, while owners apparently stay in the city.

“I supply vegetables to the weekly markets in colonies, and usually avoid buying from here. But there are times when certain vegetables are in short supply. I come here to fill the gap,” says Venkatesh, a vegetable wholesaler who visited the farms.

Vegetables as well as rice is cultivated on several acres in and around Uppal, extending up to Ghatkesar, using water from highly polluted lakes and storm water drains.

They find their way to the city’s various vegetable markets, and there is no way to find out the source of the veggies bought.

Veggies fail lab test
A bunch of spinach collected and tested from here has revealed higher than acceptable concentrations of heavy metals which could damage human health irreversibly. Corresponding report from the FSSAI-approved State Food Laboratory, Nacharam noted overdoses of arsenic and lead, besides presence of mercury.

As per the World Health Organisation standards, arsenic content in food should not exceed 0.03 parts per million (ppm), while that of lead should be less than 0.3 ppm.

ALSO READ:  How To Get Over Your Fear Of Needles?

Senior scientist Lakshminarayana Reddy testifies that both chemicals are off the limits and could prove to be dangerous for human consumption.

Traces of mercury too were found in the food sample, though within limits. However, Reddy says cumulative build up of mercury in the body could result in serious health complications over the years.

According to WHO, long term exposure to arsenic could cause skin cancer, and cancers of the bladder and lungs. Consumption of inorganic arsenic could also cause developmental effects, diabetes, pulmonary disease, and cardiovascular diseases. Lead in food could have various neurological, gastrointestinal, cardiovascular and renal side-effects. #KhabarLive