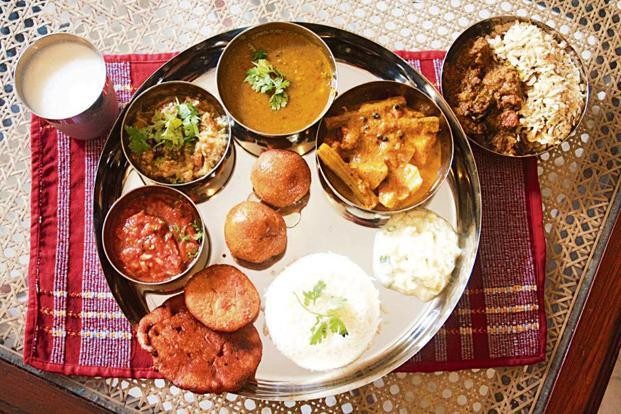 Beautifully varied across class, caste, religion and region, the nuances of Bihari food are known to few outside the state. As a new bride, when Pallavi Nigam Sahay tasted dhuska (rice and Bengal gram pancakes) at a family gathering in Hazaribagh, Jharkhand, it was love at first bite. “I was dying to have more, but in my new bride shyness I couldn’t bring myself to ask for another,” she laughs over the phone from Muscat, Oman, where she now lives.

Over the next few days, as the Bhopal-bred Sahay was introduced to a whole new culture, she was overwhelmed most by the food on offer: baingan badi ki sabzi (aubergine curry with black gram fritters), mutton curry, machli ka sarsonwala jhor (mustard fish curry), and the “jaw-dropping, mind-blowing” parwal ki mithai (sweetened and stuffed pointed gourd).

It was the beginning of an affair with Bhojpuri food that has taken Sahay all over Bihar and Jharkhand: into sweet shops and the kitchens of extended family, cajoling them to part with recipes. “They used to tease me, saying, ‘Sab aaj hi seekh logi kyaa (are you going to learn everything in one day)?’” Sahay always kept her journal handy, taking notes. The result is the cookbook, The Bhojpuri Kitchen (Westland, 2017) that details the nuances of a little-known food culture. Sahay, a former insurance professional who trained as a chef in Italy, now works as a consultant with a restaurant in Muscat and the online food guide and community, India Food Network in Mumbai. But Bihar and Jharkhand are never too far away, as she and her husband visit every other month.

It also made me wonder just why Bihari food remains in the shadows. Save the legendary litti chokha, makhane ki kheer, sattu paratha and the odd Bihari kebab, you wouldn’t usually encounter other gems. Delhi has two outlets of The PotBelly, practically the only go-to places for rich, layered Bihari meals. Celebrated chef Manish Mehrotra has paid homage to his growing up years in Bihar by using the Bihari staple, makhana in some dishes at his restaurant, Indian Accent (Delhi, New York, London). Café Lota in Delhi serves a comforting plate of sattu paratha, and modest litti chokha stalls can be found in several metros.

But the space for Bihari food culture in popular imagination remains negligible. The PotBelly’s co-owner, Puja Sahu, says one reason is that there aren’t many restaurants serving Bihari food because a lot of the authentic dishes, which need elaborate preparation, are no longer cooked in homes. “Plus, one needs to add finesse to the dishes in the way we serve them to make it a dining experience…we have been working very hard to curate and create new dishes using (typically) Bihari spices,” she says. The in-home dining food network Authenticook recently started offering the experience of sit-down Bihari meals by five home cooks in Delhi and Mumbai.

One of them is part-chef, part-management consultant Priyadarshini Gupta, in Mumbai’s Versova area. “The younger generation of Biharis themselves haven’t eaten traditional Bihari food. And those who do cook it are conservative about the idea that it can be commercialized. Even in Patna, you won’t find people selling Bihari food,” she says. As a Bengali married to a Bihari, she has learnt recipes from her mother-in-law.

Of the five Bihari meals she has created so far, all were sold out. The sit-down meals comprised sattu ka sherbet (a drink made from roasted gram powder flavoured with cumin powder and black salt), thekua (fried wholewheat biscuit), roasted tamatar ki chutney, lauki pachka (bottle-gourd fritters made during Holi). This was followed by a main course of sajne ki sabzi (drumsticks made with mustard), matar ka jhol (peas curry), mutton chura, mustard fish, rice and makuni (sattu paratha), plus a dessert of maal pua.

In Dwarka, in south-west Delhi, when home cook Sumita Srivastava had some time on her hands, her family suggested she join the Authenticook network. “I also started a small food service called Sumi Ki Rasoi, which has a Bihari menu for takeaway,” says Srivastava, who learnt to cook from her mother. Her specialities are the Champaran mutton that she makes in an earthenware pot, kadi badi (different from the popular Punjabi kadhi, with less yogurt, more besan) and daal peetha (wholewheat/rice-flour dumplings with a Bengal gram stuffing). Some of the preparations can be laborious, Srivastava says.

There seems to be some curiosity now. The health conscious are discovering the delights of makhana and sattu. Meanwhile, The PotBelly is expanding from Delhi to Gurugram this month and is opening a branch at the Patna Museum as well.

So, what really constitutes “Bihari cuisine”? There is no such thing, according to food historian and critic Pushpesh Pant. “The Bihari story is a fascinating one, dating back to the Mahabharat…. The geography of food zones is quite complex: Maithili is very different from the Purvanchali, Anga, Magadh, Bhojpuri cuisines. Then it gets further divided in Jharkhand, with its tribal food and regional variations. The food preparations vary according to social class, caste, religion and region. Some of the common food is chura matar, litti (without onion and garlic for Brahmins), makhana, sattu, ghughni and Bihari kabab,” says Pant over the phone.

While beautifully varied, Bihari food is also one of the most understated, says Gupta, who finds the flavours and combinations fascinating. “It’s the fact that sattu can be used in litti, makuni (stuffed paratha) and sherbet. Litti can be had with bharta, chutney or even mutton curry. Much of it is so healthy. People talk of protein shakes, but look at our home-grown sattu sherbet, which can keep you going the entire morning.”

Some of the defining elements in a lot of the food from Bihar and Jharkhand is the generous use of garlic (raw and cooked) and mustard, both as a paste and to drizzle raw in leafy greens and chutneys. The mustard flavour is sharper in Bihari dishes compared to neighbouring Bengal, with which it does share some commonalities, particularly the use of panch phoran (five-seed tempering) and love for all kinds of bhujia (pan-roasted vegetables). Asafoetida, cumin seeds and whole garam masala are other must-haves in the Bihari kitchen.

“Bihar is very rich (in food), but it has been looked down upon due to multiple political reasons. Therefore, its cuisine got left behind as well. Look at Bengal, for example, whose food has really travelled,” says chef and food consultant Ajay Chopra, who has made some Bihari dishes on his show Northern Flavours on the Living Foodz channel. He calls the thekua, made during the annual festival of Chhath, no less scrumptious than a Scottish shortbread. In modern kitchens, fans of the fennel-flavoured thekua often bake it instead of frying it. Chopra went a step further to fashion a bold thekua millefeuille, putting a French spin on it, for a food event recently. Another favourite of his is the Bihari murmura mutton—cooked with a lot of mustard oil and turmeric, spooned over puffed rice and topped with chopped onion, green chillies and lemon.

“These are all home-grown recipes that have not travelled, but stayed where they are eaten. They haven’t had many spokespersons. But as we dig more and more into our own traditional Indian cuisines, it will come into the spotlight,” he says. #KhabarLive