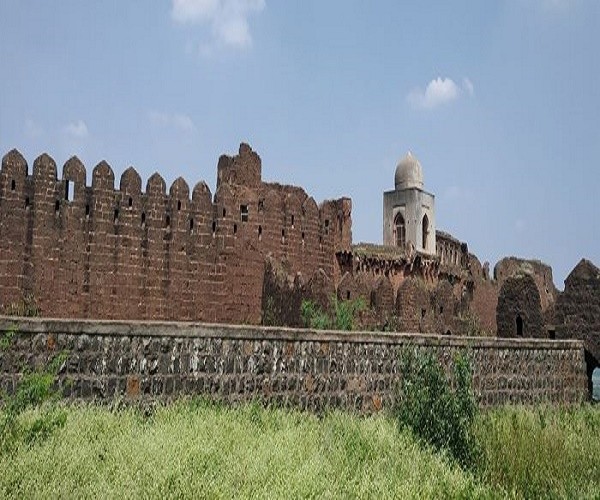 Tucked between the borders of Telangana and Maharashtra, Bidar boasts of glorious monuments in its vicinity. Known as ‘City of Whispering Monuments’, a moniker given by Archaeology Department of Karnataka, it has something for everyone.

The cave temple
We started our first Tour de Bidar by visiting the famous temple, Narasimha Jhira Cave Temple. This ancient temple is dedicated to Lord Narasimha, an incarnation of God Vishnu. The temple is famous for its entry, to reach the main sanctum sanctorum one has to wade through the water stream, which flows continuously through the cave, and we heard that it reaches till the waist of devotees. However, to our shock the water levels were very low; the luck was on our side and we finished darshanam in five minutes, but we missed the adventure of walking through waist-level water, maybe another time we thought.

Bidar fort
After a soulful visit to the temple we wanted to explore wonderful monuments of the of the city, and Bidar Fort was on the top of our list. Located at the edge of Bidar, the Fort was built by Alla-ud Din Bahman of the Bahmanid dynasty in 1424. The emperor shifted his capital from Gulbarga to Bidar and built this fort. One can witness more than 30 beautiful monuments inside the fort.

According to the local tourist guide the main citadel complex of the fort housed the royal places, mahals and mosque and this was connected to the city which was built for people. Both the citadel complex and city had separate forts for protection and there were five gateways for entry into the fort.

After a few steps into the main fort, we witnessed the Rangeen Mahal, which looks glorious even today, because of its coloured tiles decoration and artwork. The walls of this mahal are ornamented with black stone and the wood carving is superb. The walls of the mahal also have floral patterns and calligraphic text which indicates the past events.

ALSO READ:  We Need To Talk About The Economics Of 'Consent'

The locals also informed us that the shooting of many Bollywood and Kannada films took place at the fort.

Bahmani tombs
Bahmani Tombs located at Ashtur area in Bidar is a must visit for any tourist after the famous Bidar fort. The place has 12 tombs of Bahmani Sultans. As we were entering the gate we met a guide who claimed to be a direct descendant of Bahamani dynasty, it was hard to believe the man, however, he narrated the story of tombs very well. He took us to all the tombs and gave a brief history and facts of each tomb. It was disappointing to see all the 12 tombs in a dilapidated condition.

Recently, lightening struck one of the tombs and damaged it further. It’s sad to note that the tourism focused state of Karnataka is looking away from this beautiful heritage. #KhabarLive