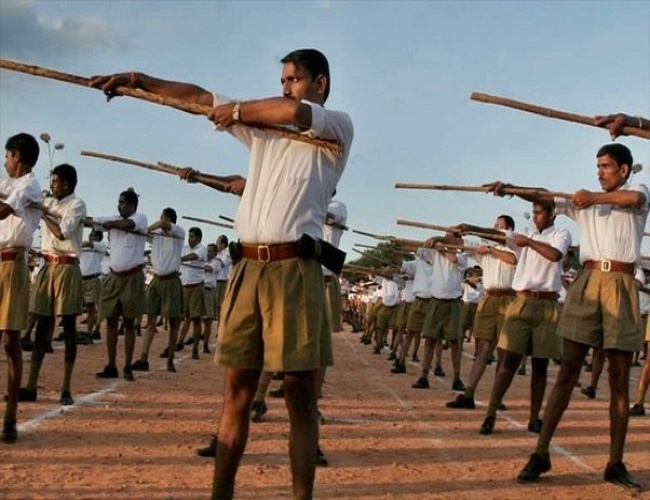 The battle in 2019 is not just to remove the BJP – it is to detox our democracy. Recent statements by Rashtriya Swayamsevak Sangh (RSS) functionaries mocking and undermining the Indian Army come in a context. They symbolise the willingness of the Bharatiya Janata Party (BJP) government and its ideological partners to brush aside cherished national and constitutional institutions to order to promote a divisive political agenda.

They represent a cultural war against what the Indian nation-state stands for. In a country with an official military and legitimate police forces, why would a private and supposedly non-political organisation be speaking about armed mobilisation by non-state actors and militia?

And yet even ministers of the government rushed to defend RSS’ opinions on the army. Many of the so-called “bright”, “modern” and “liberal” faces of the council of ministers happily became ministers of sangh, rather than ministers of state. They came out with convenient and specious logic to defend this crazy world view.

Trinamool Congress (TMC) workers were not surprised. In Bengal, we have seen the RSS taking over institutions, or at least attempting to. The latest is the mess that the BJP government has made of Visva Bharati, the university so lovingly built by Rabindranath Tagore and an institution cherished by all Bengalis, irrespective of political colour.

I will write in detail on another day about the ‘ashanti‘ that the BJP and its stormtroopers have brought to Shantiniketan. Today, let me limit myself to how the governor in the Kolkata Raj Bhavan is conducting himself. He has all but declared himself the ‘Chief Pracharak’ and ‘Shakha Henchman’. The governor has even started holding meetings with district administration officials without involving or informing the state government and the elected chief minister.

This complaint is not unique. In Delhi, successive lieutenant governors have functioned as the B team of the BJP and sought to cripple a popular government. My friends in Tamil Nadu tell me the governor there is keener to make peace between rival factions of the state government, and somehow prop up the ruling group, than stay neutral.

Parliament is another institution that the RSS and its political arm, the BJP, have sought to capture and neutralise. Since the government lacks a majority in the Rajya Sabha, it routinely introduces bills as Money Bills, has the Lok Sabha passing them without much debate and questioning, and then gives the Rajya Sabha a fait accompli. This is because the Rajya Sabha has fewer powers when it comes to a Money Bill.

The finance minister has gone to the extent of saying that the “wisdom” of the Lok Sabha should not be questioned by the Rajya Sabha. It is as if the upper house, the house of states – representing the aspirations and concerns of states and their governments – counts for nothing.

The Parliamentary Standing Committees are supposed to deliberate on and fine-tune bills, with inputs from a range of parties and members of parliament being considered. The BJP government doesn’t take standing committees seriously. Only seven of 72 bills passed in the tenure of the BJP regime have been sent to a standing committee. Of the remaining 65, two have been sent to a select committee. The other 63 have just been rammed through.

In contrast, UPA II (2009-14) passed 116 bills and referred 66 of these to committee scrutiny. This makes the BJP regime an outlier in India’s history. RSS-ocracy is in full display.

The latest institution to be compromised is the Election Commission. A bunch of favoured bureaucrats, all of whom have a history of working closely with BJP bigwigs, have been appointed Election Commissioners. This has raised questions about credibility. For example, there was a delay in announcing the dates of the Gujarat election, apparently to give the BJP more time to fix policy before the code of conduct kicked in.

The solution lies in taking away the government’s unilateral right to appoint members of the Election Commission. We must move to a collegium system, where the opposition and the judiciary – and a wider range of public opinion – has a say in selecting the Election Commissioners for India. This government cannot be trusted. It is packing key institutions in the run up to the 2019 election and will leave its successor with hidden traps to negotiate.

I would appeal to all opposition parties and all citizens in fact to come together to discuss and challenge the toxic atmosphere in our institutions. The battle in 2019 is not just to remove the BJP – it is to detox our democracy. #KhabarLive