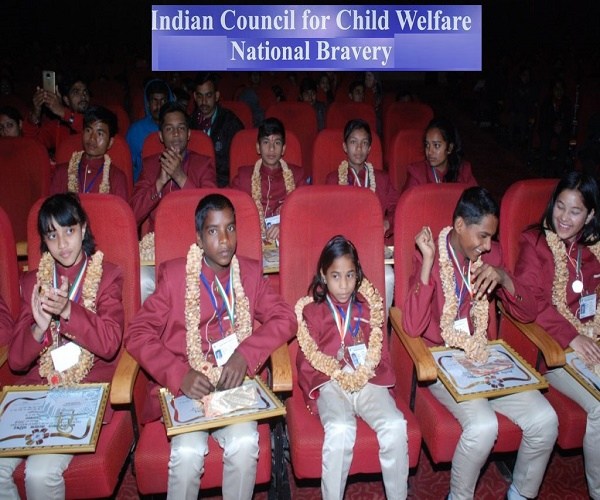 Generally, these children – selected by the Indian Council for Child Welfare (ICCW) – would be given their awards by the prime minister a day before Republic Day in New Delhi – a practice being carried out since 1957.

Instead, these children, selected by the well-known NGO, Indian Council for Child Welfare (ICCW), were at the India Habitat Centre in New Delhi on January 25, receiving the appreciation for their acts of gallantry from a retired Admiral. The significant part of this deviation from the norm, practiced for the last 62 years, is – these children would not be a part of the parade.

“Like every year, we began our selection process for the annual bravery awards almost a year ago. It typically begins in early February when we activate our state chapters to look for acts of bravery by children. It is a stringent process before we select them for the prestigious awards,” related Gita Siddhartha, president of ICCW.

She continued, “They are brought to Delhi thereafter, where the prime minister recognises their acts of bravery. They are also hosted by the president at Rashtrapati Bhavan and they take part in the Republic Day parade. It gives a huge morale boost not only to the selected children but also sends out a strong message to all children to emulate good values and be responsible. The entire country watches them march through Rajpath, a matter of pride to the nation.”

As is the norm, ICCW wrote a letter to the office of prime minister this past December seeking his time to give away the awards to 18 children (one posthumously). Failing to elicit an answer, it wrote to the Union Defence Ministry, which oversees the parade but received no response from it either. “Till date, we have not got any official communication from the government. But we were told verbally to hand over our awards to the government. We held two executive body and one annual body meetings on the issue but a resolution was taken, that legally these are our awards and we shouldn’t hand them over to the government,” Gita told #KhabarLive.

Since the awards were not handed over to the government, it was decided that the children selected by ICCW won’t take part in the parade. Till last year, every president has hosted the awardees selected by ICCW. “As many as 14 prime ministers have so far given away the awards to 987 children.”

Having refused to accept the children chosen by ICCW, the government included the component of bravery to the Ministry of Women and Child Development’s revamped Bal Puraskar under the name of Pradhan Mantri Rashtriya Bal Puraskar. On January 22, 26 students under categories like innovation, scholastic, sports, arts and culture and social service were selected for these awards. It included two children for bravery. President Ram Nath Kovind gave away the awards in New Delhi.

On January 24, Prime Minister Narendra Modi also met those children. Instead of the children selected by ICCW, they would now be part of the parade.

The Ministry had formed a committee some time ago to decide whether funds were “siphoned off or misused.” On January 19, the ministry filed an FIR against ICCW for allegedly misusing funds and failing to refund the unspent balance.

The ICCW office bearers, in a press note, called these charges “false,” adding, “To give a valid reason for a change of a 62-year-old practice is a courtesy to our children.”

‘Don’t politicise brave acts of children’
Gita added, “One shouldn’t play politics with children. What is the fault of these children that they were denied this opportunity? After all, the Republic Day is not for the government but for all of us and everyone has a right to be part of it. My point is, don’t give them the awards but allow them to be part of the Parade, which they would remember for life. These children, having shown exemplary courage, deserve that much from the nation.”

They would see 26 other children pass by the screen only because the government chose to change the standard practice at the last minute based on an allegation they have no clue about.

On the other side, in the early hours of February 10, 2018, Soumyadip Jana was in his house inside the Sunjuwan Military Station in Jammu when the area came under a terrorist attack. Three-heavily armed militants, after having entered the station premises, approached their house. Hearing the commotion near the main door, 13-year-old Soumyadip pushed his mother and sister into a room and locked the door from inside.

After breaking open the main door, the militants tried to enter the locked room. By then, Soumyadip barricaded it with steel trunks and stood against them. The militants threw a grenade to break the barricade before beginning to open fire at the door.

Soumyadip sustained multiple splinter injuries in that attack but the sound of the bursting grenade and the gunshots coming from the house alerted the security forces who managed to nab the attackers.

Since then, Soumyadip has undergone multiple operations. He can’t move on his own as the left side of his body is still paralysed. The attack also took away his eyesight besides causing severe hearing loss. These days, Soumyadip is undergoing physiotherapy at the Research and Referral Hospital in Delhi.

Gurugu Hima Priya would be exactly five years younger to Soumyadip, a resident of the same military station in Jammu. That February morning, she too was at her house with her mother when some militants barged into their house. The mother and daughter locked themselves up in a room which led the militants to throw a grenade at the door. The grenade slipped through a part of the door, causing multiple splinter injuries on the mother. She fell on the floor and began to bleed profusely. Thereafter, eight-year-old Hima Priya opened the door and engaged in a conversation with the militants. They kept a gun pointed at her head for about eight hours but she continued to interact with them.

By standard practice, Soumyadip and Hima Priya, along with 15 other children, would have been a part of the country’s pride – showcased in the Republic Day parade tomorrow – by dint of being this year’s National Bravery Award winners. Their awards would have been handed over by the prime minister a day before the Republic Day in New Delhi – a ritual being carried out since 1957. #KhabarLive