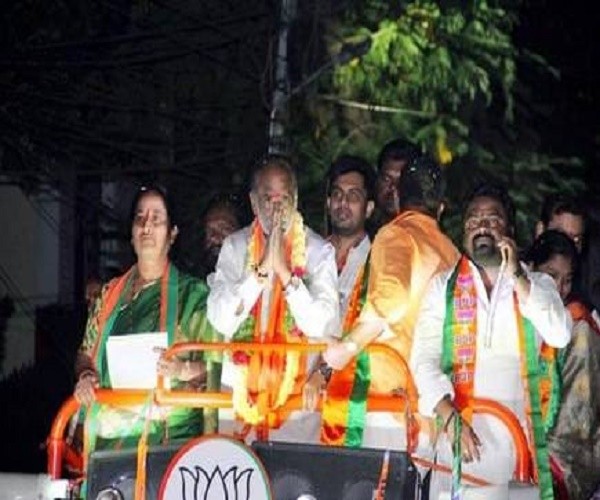 Campaigns vigorously in Musheerabad Assembly constituency as cool winter night sets in, the Chikkadpally-Narayanaguda main road becomes a beehive of commercial and construction activity with shops on either side doing brisk business, while metro rail construction goes on unhindered.

There is a noisy buzz a few hundred yards away in Ashoknagar lane, as alarge crowd, including many youngsters sporting saffron green scarves of the Bharatiya Janata Party (BJP), are eagerly waiting to rev up their bikes.

As the drum beats reach a crescendo, Telangana party president K. Laxman emerges out of a temple amid slogans of ‘Bharat mata ki jai’ and ‘Laxman zindabad’. Contesting from Musheerabad Assembly constituency for the fifth time, the ‘local man’ is hoping to win again, though he does not have the cushion of alliance partner unlike the previous elections.

“My political growth is synonymous with Musheerabad. I am treated as a family member here and development has always been my agenda. I am confident of winning this time too with increased majority,” says Mr. Laxman, as he goes around the colony greeting people, accepting their traditional aarathi and seeking their support, once again.

Soon, he clambers on to a specially-decorated Jeep and with local leaders by his side, his yatra begins preceded by bikes cavorting through the lanes, creating sufficient commotion for people to come out. At one point, a group of youngsters join the campaign who are welcomed by BJP leaders with selfies and scarves.

“We have all experienced four-and-half-years of autocratic rule of the TRS where only the first family benefited. A vote for me will send a strong message across Telangana. We have strived to improve civic amenities here and when caretaker Chief Minister K. Chandrasekhar Rao wanted to take away our prized public spaces of Indira Park and NTR Stadium, I strongly opposed and managed to protect them,” he said amid cheers.

After the rally moved into Jawaharnagar, Bapunagar, Gandhinagar, Raghavendranagar and Chikkadpally, the local leaders like Chinna, Gopal, Damodar and others joined the yatra.

ALSO READ:  Why TRS Leader 'Harish Rao' Has To Walk The 'Political Tightrope' In Telangana?

Addressing roadside meetings, Mr. Laxman reminded the Vambay housing for 3,000 labourers in his earlier stint in 1999 and claimed to have ‘fought’ with the government to get permission for two-bedroom housing in five slums.

The BJP leader has been maintaining a punishing pace with padayatras in the mornings, meeting association leaders in the noons and Jeep yatras in the evenings to cover the constituency as much as possible, given that once the national leaders like Modi and Amit Shah arrive, he would have to be with them in their campaign in the rest of the State. #KhabarLive