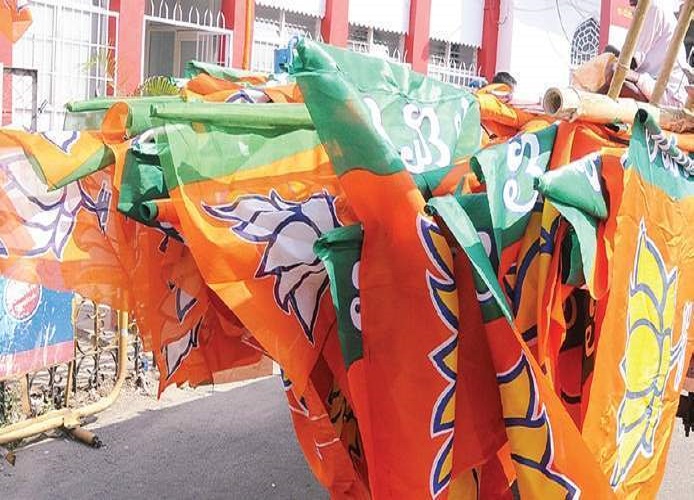 Though the BJP state leadership is claiming that it is putting in efforts to come to power in the State by next elections, the party central leadership is said to be of the view that it should adopt a pragmatic approach to make the party become a strong political force in the State at least by 2024 polls, “instead of living in a cloud-cuckoo-land.”According to sources, for now the saffron party’s main focus in the State is to ensure that its national rival, Congress Party, will not reclaim its lost ground in the State in the near future.

Hence, it is learnt that, the party’s political strategies are being formulated to achieve this objective, instead of directly targetting the ruling TRS, which is at present maintaining “friendly” relations with the BJP’s Delhi bosses. That means, the main focus of the saffron party leaders, at present, is further weakening the principal Opposition, the Congress party, in the State by the ensuing general elections. The BJP’s proposal to go it all alone to the next polls in the State is also reportedly aimed at fulfilling this task.

“Our Delhi bosses feel that if we can prevent the Congress party from storming to power in the State in the next elections, the grand-old party will further become decimated in the new State. Once this goal is achieved, we can then easily crush the TRS, which is a regional party, and realise our dream of coming to power in the new State by 2024. Hence, our party central leadership is drawing up long-term strategies to make the BJP rise to power in the state in a steady manner with solid foundation,” a leader of the BJP told Express.

The leader further informed that party national president Amit Shah will be visiting the State frequently in order to strengthen the party at grassroots level with a sole objective of transforming the party into a force to be reckoned with by 2024 polls. “As TS is not our immediate target, Shah’s visit to State has been postponed several times, since last December. He is at present busy with formulating electoral strategies for Karnataka Assembly polls, besides concentrating on Tripura, Meghalaya, Nagaland and Mizoram, which are going to polls,” BJP leader informed. However, according to him, Shah will frequently come to Hyderabad whenever he goes to Karnataka to campaign for the party.

Even as his AP counterparts are hesitating over throwing brickbats at Jana Sena chief Pawan Kalyan, BJP floor leader in Telangana State Assembly G Kishan Reddy on Tuesday criticised the film actor by hurling sarcastic remarks at him. “Pawan Kalyan is not at all good at acting on silver screen. Being a brother of K Chiranjeevi, he got opportunities in Telugu film industry. Now, with the help of a section of media, he is trying to establish himself as a politico,” Reddy said. #KhabarLive