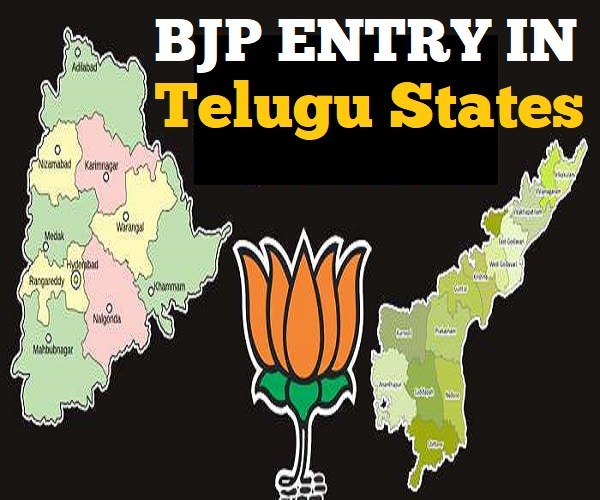 As the TDP in Andhra and the Congress in Telangana take a back seat, the political vacuum in the two Telugu states is fast being filled by the BJP with a push from the RSS.

On June 27, a panel discussion on the rise of fascism in India was held at Lamakaan, a cultural space bang in the middle of upscale Banjara Hills in Hyderabad. But till the day of the event the organisers were wary about trouble from the Telangana wing of the Bharatiya Janata Party (BJP). The event went on with no disruption, but a call from the police to consider scrapping the event fearing reaction from the BJP in the state was something new for the organisers and for Lamakaan.

Up until last year, the BJP was a non-player in the political landscape of the two Telugu states. But all that has changed with the defeat faced by the TDP in Andhra and by the Congress in Telangana in the recent Lok Sabha and Assembly elections. The political vacuum caused by the lack of opposition in the two states is fast being filled by the BJP.

The BJP has been attracting not just top leaders from the TDP and Congress, but also booth level workers from mandals and villages in both the states. The party is already in election mode, making inroads into villages with the assistance of the Rashtriya Swayamsevak Sangh (RSS). The aim being to become the main challenger for the K Chandrashekar Rao and YS Jagan Mohan Reddy led state governments in the 2023 state elections in the two Telugu states.

TDP’s loss is BJP’s gain
In June this year, what began with four TDP Rajya Sabha MPs in Andhra Pradesh switching sides to the BJP soon snowballed into a mass defection with five more leaders leaving the party. MLAs from the dominant Kapu caste faction, which holds political sway within the TDP, have also begun contemplating switching over to the BJP. Sources in the party say the defections will go on for a few more months and that there is nothing the party can do about it.

The mood in the TDP is grim. “We expect a few more MLAs to switch sides. Some of them have not attended a single meeting post the Assembly elections. We expect a few ex MLAs from Anantapur, East Godavari, and an ex-minister to also desert the party. There is nothing we can do to at the moment, we are trying to talk to a few who have spoken out against the leadership and ask them not to leave,” says a source within the TDP.

The party alleges that the BJP has instructed the YSRCP not to induct anyone defecting from the TDP. “The aim is to expand the BJP in Andhra Pradesh, they want this badly,” the source adds.

The TDP fears further defections but expresses confidence that the inroads being made by the BJP will be limited. “The people who have left the TDP are not all connected with the masses,” says the leader. There have been reports of some villages joining the BJP en masse at Adoni and Mantralayam in Kurnool district. “This is because of faction politics. They think it’s better to join the BJP and be safe for the next 5 years than be in the TDP and face the ire of opposite factions,” the TDP leader reasons.

BJP’s search for Panna Pramukhs
In Kurnool district, the BJP Lok Sabha candidate in the last election, PV Parthasarathi, claims he has managed to rope in villages under 11 of the 54 mandals and is making inroads in others. This is a first for the party, which earlier did not have sufficient infrastructure to reach the interior parts of the state.

The leader is trying to identify ‘Panna Pramukhs’ or party workers who will be in charge of voters on each page of the voter list. Their task is to interact and convince voters to vote for the BJP in the next Assembly elections in the state. This election management strategy, reportedly developed by Amit Shah when he was the BJP President, is said to have helped the party make inroads in other states.

“We have a presence in 23 mandals and been able to influence 11 mandals in Kurnool. A similar approach has been adopted in other districts of the state,” says Parthasarathi. The party has been able to rope in local TDP leaders from these villages to join them.

“These local leaders do a lot of service at the village and mandal level, and are very connected to the people. They are a bridge between government schemes, politicians and the people,” says the BJP leader, who blames the local media for siding with the TDP and the YSRCP and thus not covering the work done by the BJP in the Centre.

The BJP in Andhra Pradesh alleges that the former ruling party, the TDP, had been claiming the work done by the BJP in the Centre as their own work. “The roads, houses, welfare schemes of the Centre, and even ration rice given by the BJP was being claimed to have been given by the TDP. Take any scheme, developmental and welfare activity, 80% of the money is spent by the NDA. We had to, and still have to, explain this to the people. These local leaders who have now joined the BJP are the key to get the message of the party to the grassroots,” Parthasarathi adds.

Is RSS lending a helping hand?
Aiding the BJP in Andhra is the RSS, though not openly. “RSS is a voluntary organisation, if you go to any village, people won’t understand the difference between RSS, BJP and their workers. RSS is the mother for all and BJP is a branch for political activity. The RSS never asks anybody to vote for the BJP, they always say which is a good party the people can vote for, they don’t specify. But we do get a lead into the village where the BJP worker is not there as an RSS worker will be there. The mother tree is helping the political branch grow in Andhra,” quips Parthasarathi.

ALSO READ:  A Nature's Paradise Of Birds At Pakhal In Warangal District

A similar textbook response was given by Manikonda Vijay Kumar, speaking for the RSS from Hyderabad, when asked if the RSS is helping the BJP expand in the two states.

“It’s not exactly correct that we help the BJP. Suppose an RSS worker is interested in politics, he cannot hold any post in the RSS. He may be an RSS worker but will be working for the BJP. RSS workers have the liberty to work for any political party. They are there in the TDP and Congress too. There is no direct access for the RSS into the BJP’s working affairs,” says Vijay Kumar, adding, “There is a political vacuum in terms of leadership in both the Telugu states and the BJP has got a chance.”

The Andhra Pradesh BJP also hopes to make a “clear difference” in the upcoming panchayat and Zilla Parishad elections in the coming months.

The BJP in Telangana is also making inroads into the state in a similar fashion. BJP leader M Dharma Rao, who is in charge of party memberships, says their aim is to ensure the party has workers across all 33,000 polling booths by the time the state goes to the polls next.

In the last week of June, two Congress leaders opted to move over to the BJP than to the ruling TRS. Many more leaders from the Congress are expected to join the BJP along with their cadres.

“It’s not just the Congress cadres, even the Communist cadres in Telangana are willing to join the BJP despite the ideological differences. Off late they are of the opinion that the BJP is the only one party that strives for the downtrodden. There are 33,000 polling booths in the state and we have entered 18,000 polling booths. Our aim is to have a presence in the rest of the polling booths before the next Assembly polls in Telangana,” says Rao.#KhabarLive