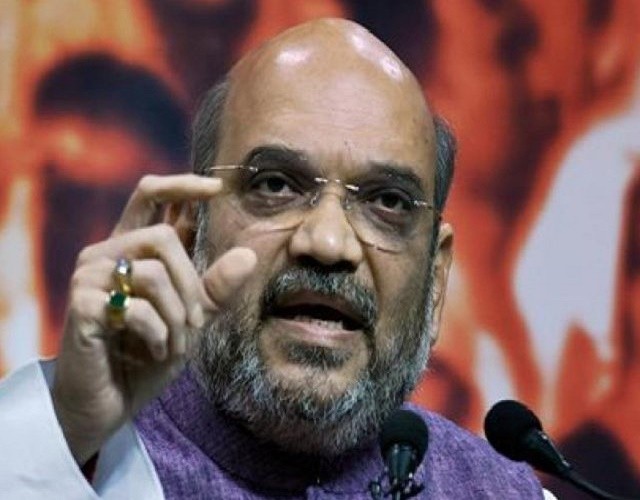 The BJP chief’s pinch-hitting against southern states does no good to the Team India spirit that Modi speaks of. A week after TDP chief Chandrababu Naidu snapped ties with the BJP, Andhra Pradesh got a glimpse of how ugly post-divorce political life can be.

On 24 March, BJP president Amit Shah accused Naidu of not submitting fund-utilisation certificates (UC) for the money released by the Centre. He asked if the Andhra government’s reluctance to receive NABARD funds was “because it poses problems in diverting funds for ‘other’ purposes”.

The underlying subtext of corruption under Naidu was too obvious to miss.

“Governments are accountable to the people for every single penny spent on their behalf. Therefore, your statements that the state government has no obligation to give any such statements of expenditure are evasive and reflect governance deficit,” Shah wrote.

He added that there were “serious lapses” on part of the Andhra government that “cannot be ignored”.

There is a familiar pattern to Shah’s strategy in dealing with political leaders who are not part of his party’s parivaar. It involves hurling corruption charges while appropriating the tag of the cleanest party for the BJP. This fits into Shah’s plan of making inroads in these states and eventually capturing power.

And Naidu is not his first target.

At a public meeting in Warangal in September 2016, Shah had accused the Telangana government of diverting Rs 90,000 crore released by the Centre and spending the money to buy MLAs from other political parties.

Nine months later, in May 2017, Shah, on a tour of Telangana, said the Narendra Modi government had released Rs 1 lakh crore to the state. At that time, chief minister K Chandrasekhar Rao was not amused.

“The Centre is not doing any meherbaani (favour), it is our right,” KCR snapped back. The CM also pointed out that only Rs 67,390 crore was received by Telangana from the time the state was formed in 2014.

“Telangana paid Rs 50,013 crore to the Centre in the form of various taxes in 2016-17, but got only Rs 24,561 crore in return. This shows who owed funds to whom,” added KCR, trying to erase the impression that Telangana was living off New Delhi’s charity.

Again, this January, Shah engaged in a similar account-taking exercise with Karnataka chief minister Siddaramaiah. He said Rs 3 lakh crore had been given to Karnataka by the Centre as grants and under the 14th finance commission, and went on to charge the Siddaramaiah administration with corruption.

“Where has all the money gone? If the people want to know where the money siphoned off by the Congress government has gone, look at the nearest Congress leader in your village,” said Shah, adding, “He would have constructed a four-floor apartment and has a brand new car in front of his home, whereas, five years ago, he was staying in a hut and riding a Luna moped.”

Chief ministers like Naidu and others must follow procedures and account for every penny spent. But the problem is that Shah is appropriating the role of CAG or any other government-appointed watchdog.

It does not help matters that the latest charge comes at a time when south Indian states are articulating their grievance about receiving much less than what they contribute to the central pool in the form of taxes. If Shah has proof of wrongdoing against Naidu, KCR or Siddaramaiah, the central government should order a probe instead of letting the ruling party chief use it as political ammunition. Not doing so is to allow an alleged loot of the country’s wealth.

Given his proximity to Prime Minister Narendra Modi, most often, Shah’s diatribe is assumed as coming from the former himself. Shah isn’t just talking politics, but here his accusations are viewed as though he is speaking on behalf of the government of India. He is actually commenting on the Centre-state financial relationship. But he is neither the finance minister nor even a member of the council of ministers.

The Shah template of pinch-hitting does no good to the federal structure of the country and the Team India spirit that Modi speaks of. Shah’s brusque rhetoric is, in fact, a commentary on mistrust. What makes it worse is the mai-baap tone and tenor that makes it seem like the BJP government at the Centre has dipped into its pocket to give money to the states. No one in any of the 29 states of the Indian Union will appreciate being made to feel as if they are living off the generosity of the BJP government in New Delhi.

It is this attitude that provoked KCR to accuse Delhi of riding roughshod over the federal structure of the country, reducing states to puppets. This is why Mamata Banerjee accused Delhi of following “fake federalism”.

“It is a letter written insulting every citizen of Andhra Pradesh,” said Naidu, taking the position that Shah’s letter was not written only to him. KCR had taken a similar position when he said he won’t back off if anything is said to harm Telangana’s image.

As the battle lines get drawn ahead of 2019, this is part of the strategy satraps are putting in place. Identity politics is their answer to Amit Shah’s brand of realpolitik that questions their honesty quotient. #KhabarLive