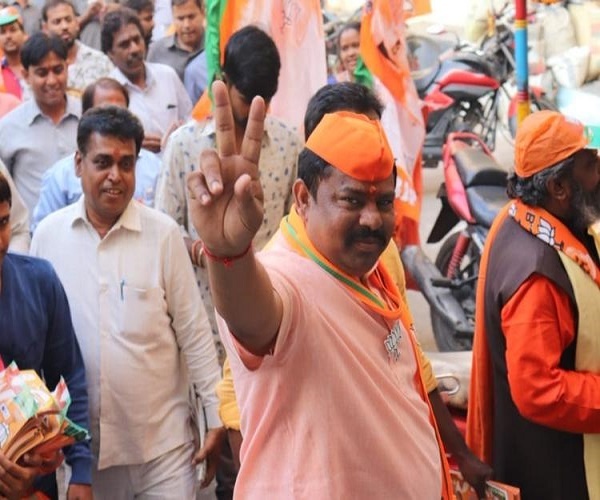 Aiming to emerge as an alternative to the ruling TRS, the BJP is looking to garner maximum political benefit from its two-decade-old demand for the official celebration of Telangana Liberation Day on September 17.

Buoyed by its impressive performance in the Lok Sabha elections and the support it received for scrapping Article 370 in Jammu and Kashmir, the Bharatiya Janata Party (BJP) is trying to put Telangana Rashtra Samithi (TRS) on the mat by accusing it of surrendering to All India Majlis-e-Ittehadul Muslimeen (AIMIM) by not celebrating the day officially.

Though the BJP camp is disappointed over Union Home Minister and party president Amit Shah not attending the celebrations, it is expected to make every effort to highlight its demand and corner the mileage by playing the card of polarization.

The party has planned ‘tiranga yatras’ across the state and its leaders and cadres will hoist the national flag in all 33 districts to mark the occasion. A public meeting is also scheduled at Patancheru near Hyderabad.

Union Minister of State for Home G. Kishan Reddy and three other BJP Lok Sabha members from the state will be participating in the celebrations.

Preparing the ground for the celebrations, a delegation of BJP leaders led by the party’s state unit chief K. Laxman on Saturday met Governor Tamilisai Soundararajan, urging her to direct the state government to officially celebrate Telangana Liberation Day.

BJP argues that in those districts of Karnataka and Maharashtra which were part of erstwhile Hyderabad State, September 17 is officially celebrated and since entire Telangana was under the ‘tyrannical’ rule of the Nizam, the day should be celebrated officially on a grand scale.

It was on this day in 1948 that then Hyderabad State was merged with the Indian Union following the Centre’s military action, popularly known as ‘Police Action’.

Top leaders of BJP during their visit to Telangana, always mentions that the Nizam of Hyderabad State was not ready to accede to the Indian Union but Sardar Vallabh Bhai Patel succeeded in making Hyderabad accede to India with the ‘Police Action’.

They also allege that the Nizam’s Army and his private militia ‘Razakars’ committed excesses and tried to suppress the freedom struggle.

“It is well known that BJP has been trying to celebrate September 17 from communal angle for last 20 years. The demand this time may be strong in the wake of scrapping of Article 370 but polarisation on this issue is marginal,” political analyst Telakapalli Ravi. He believes that the BJP’s attempts may benefit TRS.

Successive governments of Congress and Telugu Desam Party (TDP) in undivided Andhra Pradesh and after formation of the Telangana state, the TRS government ignored the demands for officially celebrating the day to avoid any controversy.

Muslim groups have been opposing any celebrations as they claim that Muslims were massacred during the ‘police action’.

AIMIM, which is often dubbed by BJP leaders as party of ‘razakars’, maintains that there is only one Independence Day for the entire country and hence there is no need for separate celebrations in Telangana.

The Congress, TDP, TRS, Left parties and other groups celebrate September 17 as Telangana merger day by hoisting the national flag. They refrain from calling it liberation day.

Chief Minister K. Chandrashekhar Rao, while speaking in the Assembly last year, had rejected the demand for celebrating ‘Telangana Liberation Day’. The TRS chief said the historic event can only be termed as “transition from monarchy to democracy” and not as liberation.

Stating that the BJP wished to portray the day as “liberation from Muslim rule”, Rao said it was not the government’s wish to antagnoise any particular community.

“The demand to celebrate September 17 as the Liberation Day existed for decades, but with BJP emerging stronger politically in Delhi, the party considers it as the right time to play politics around it,” said analyst P. Raghava Reddy.

He believes that the approach of ruling TRS in general and the chief minister in particular towards September 17 is providing a good scope for BJP to make the issue political and gain mileage from it.

The analyst added that as the BJP is emboldened by the support it received following abrogation of Article 370 in Jammu and Kashmir it would be encouraged to harp on a similar “nationalistic/national integration” card in Telangana too. #KhabarLive