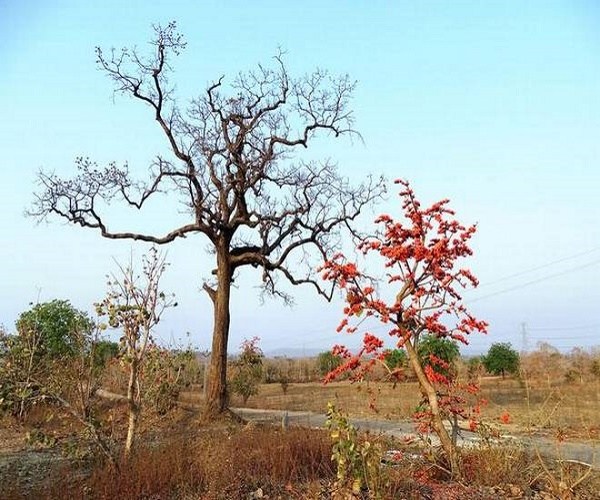 They dot the vast stretches of dried-up forests in the erstwhile Adilabad district
Before the erstwhile Adilabad is draped in a pleasant green foliage after monsoon, a different-yet-equally beautiful landscape unfolds in spring/summer here. Dotting the vast stretches of the dried-up vegetation in these forests between February and April are a myriad of flowering trees in bloom that beckon the nature-lovers.

The most abundant and visible of all flowering trees is moduga or palash, aptly known as the flame of the forest (Butea monosperma) for its orange-coloured thick inflorescence. The dark colour of the blossom stands out against the brown of the parched earth in summer.

There is also a generous sprinkling of the boorugu chettu (Bombax ceiba) with reddish flowers. This tree, like the moduga, sheds its flowers early in the morning that forms a colourful carpet under these trees.

Another tree, the ippa or mahua (Madhuca indica), also sheds its flowers in the small hours every day starting from late February and ending in mid-April depending on the flowering period. The ippa flowers, however, are known more for the intoxicating fragrance that they emit.

“The early-risers get to take in the fragrance of the irp flowers (Gondi for ippa). When we proceed into the forest for grazing cattle as the sun rises, the orange and red canopies of the moduga and boorugu come into sight,” said Kumra Lingu of Pippaldhari village in Adilabad district. “The dryness of the forests is also compensated by the palakodise (Wrightea tinctorea), dumpena (Lannea coromandelica) budda dharmi (Careya arborea) and poosugu (Schleichera oleosa) trees. The first two have white blossoms, while budda dharmi sprouts beautiful white or yellow coloured flowers and the red tender leaves of poosugu grow like petals of flowers,” said E. Narasimha Murthy, a professor in Botany Department at Shatavahana University.

“Almost all of these trees shed leaves before flowering. This is to reduce energy consumption in the water-stressed months,” he added, explaining the science behind the phenomenon.

The flowering and fruit-yielding trees not only make the place beautiful, but are important constituents of the food chain. For example, frugivorous of fruit-eating birds like the myna feed on the palash and aid in cross pollination, according to the botanist. #KhabarLive