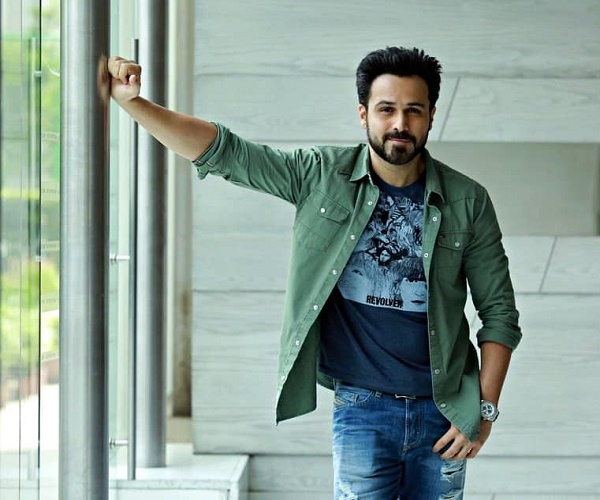 The actor gained nationwide popularity (and notoriety) for the kissing sequences in his movies, a trope he milked until he (and everyone else) got pretty done with it.

But today, the actor, who’s awaiting the release of Cheat India next month, looks back at that phase of his career, the Aashiq Banaya Aapne, Aksar and Murder phase, with a mix of embarrassment, amusement and “it was right for that time” kind of studied introspection.

Recently, Emraan Hashmi was in Hyderabad for a private unction, #KhabarLive have an exclusive interview in an informal chatting session. Here are Excerpts:

“I am proud of some of them, proud of the work I did and then there are those that I don’t want to watch. Today I cannot say if it was a creatively fulfilling experience for me, even though a whole lot of them made a lot of money,” he said.

As for the kissing scenes, Hashmi is clear that he feels it was a bit “silly and frivolous and whatever”.

In retrospect, he’s simply baffled that at one time, “we were tripping on a dude kissing a girl”.

“I fed off the fantasies of our sexually starved society. At least at that point it was. Yes, I benefited out of it, sure, but now it feels like a gift has turned into a curse,” he laughs.

Why does he think those kind of films have been largely phased out of the mainstream?

Outside of the semi-erotic-noir-musical territory, one of the worst/irresponsible films he did was the Ekta Kapoor-produced Azhar, a white-washed biopic on disgraced cricketer Mohammad Azharuddin. When asked how he feels about that now, the actor admits that he isn’t very proud of the film.

“The thing is when you are creatively engaged, you lose all objectivity. Also, in Bollywood, there’s a certain tonality an actor has to abide by. It changes a lot. You’ve to have your 5 songs, your heroism, your larger-than-life persona and that’s what creeps in. The worst of it all—background music. It’s a fraudulent, manipulative technique we just can’t do without. Basically, your background score is ‘feel this, feel this, feel this’. Ghusao feelings ko. Acting in this industry is dependent on how strong your background music is.”

Hashmi makes a broader point about how Indians, as a socirty, cannot function in silence.

“We get impatient! Look at our streets. It’s very indicative of how our minds are wired. There’s yelling and blaring of horns and all sorts of loud antics. Now, as a film industry, you are catering to that culture. You have to. The other option is to sit at home and watch your own movies alone.”

Acting in this industry is dependent on how strong your background music is
Being fearful, in Hashmi’s book, means being a prisoner to his past image, one he’s trying aggressively to shake off. “That damn image.”

It also means not signing films keeping the box-office outcome in mind.

To his credit, the actor has, in his own capacity, tried challenging accepted norms of stardom by doing films such as Shanghai, Tigers, The Dirty Picture and Awarapan, which is widely noted to be his best performance.

His upcoming film, Cheat India, which releases on 25 January, looks at corruption in academia and how schools and colleges are designed to fail our students, instead of educating them.

“Economics is very important. I’d want my producers to earn at least a buck more than what they’ve put in. But the numbers game is annoying, it gets to you.”

Hashmi proceeds to point out a fact that most producers would frown upon.

“In India, people think of a film’s box-office success as a testimony of its merit. Box office limits you to the confines of a box. Now, I love out-of-the-box stuff but this industry just doesn’t allow you to do that,” he says.

As Hashmi inches towards his 40s, having spent nearly 17 years in the industry, he feels a sense of insecurity. “There are new kids coming every other day and they are really good. When we started out, we had a lot of breathing space to grow. Now, it’s changing too rapidly that if you don’t catch up, you will become irrelevant, which is an actor’s worst fear.”

Why’d someone watch something semi-erotic and titillating when they’ve much more graphic content on their palms? Now, I hope that damn image of mine also changes
The Murder 2 actor also observes that he isn’t just competing for viewer’s attention with other actors but other creative individuals, from Instagram influencers and YouTube stars to actors exploding on streaming platforms. “Of course there’s the fear about fading into anonymity but you cannot let that thought overpower you. You cannot let fear dictate your creative choices.”

A culture of fear, the actor admits, is engulfing filmmakers who are restraining themselves from touching topics that could potentially invite trouble.

“Here, they stall releases and burn down theatres,” Hashmi says. “You are stopped by everyone in the hierarchy, right down the food chain, who’ll advise you against a sensitive subject. The distributors and exhibitors will ask you a simple question you’ll struggle to answer—‘how do we release your film, boss?’”

“Unfortunately, this climate is showing no signs of changing. Yes, we have a democracy to a certain extent but is there freedom of speech? In America, you can make any film but here, the first thing we worry about are the political parties that will come down with a morcha and stones.”

Being a Muslim actor, Hashmi has been subject to religion-based discrimination and feels the polarisation hasn’t faded. In 2009, the actor wasn’t able to buy an apartment in Mumbai’s upscale Pali Hill neighbourhood, something he attributed to his faith.

“And it still happens. It happens not just in ghettos but in plush places such as Pali Hill and Juhu,” the actor says. “The whole issue of religious sentiments and people flaring up… do you think it has become more extreme?” he questions, following it up by, “As actors, we lead such privileged and insulated lives that it can actually put you out of touch with ground realities.”

The actor hadn’t heard of Naseeruddin Shah’s recent comments and the outrage it sparked.

Shah, in a recent interview, spoke about growing intolerance in a country that protects cows over the life of a policeman. He also said that tomorrow, if his children were surrounded by a mob and asked for their religion, they wouldn’t have an answer as they don’t practice any.

When asked what he feels about the rising intolerance, whether it’s journalists getting attacked or cow vigilantism or movies being banned, Hashmi said it comes down to being inclusive, saying one person cannot impose his/her ideology.

“We have to be more accepting of other people’s faiths and beliefs. My mother was a Christian. I married a Hindu woman and haven’t changed her belief system, neither has she changed mine. We’ve a mandir in our house. My son offers namaaz as well as prays as per Hindu tradition. It’s up to him to choose what he wants to follow. It’s a very secular household. While i was growing up, I wasn’t even thinking in this direction but now we are and it’s disturbing.”

The actor said the country’s divisive politics is spewing spite and hate within communities.

“It’s some person trying to push forward his agenda, spreading spite and hate all around. It’s like, my faith is the right faith and to hell with yours. Why? Why are we even talking about your God better than mine or mine better than anyone else’s? When did we become this? I hope it gets slightly more liberal here. Right now, it’s not. Definitely not for making films. They just don’t get sanctioned here.”

However, the actor is hopeful that the influx of streaming giants is going to enable diverse forms of creative expressions not restricted simply to movies that play in cinema.

“I am doing a Netflix show called Bard of Blood and honestly, it’s the closest I’ve come to doing something as far as my artistic sensibilities are concerned. You know how it feels?”

“It feels like I’m starting from scratch. Undoing the past, starting afresh.”#KhabarLive