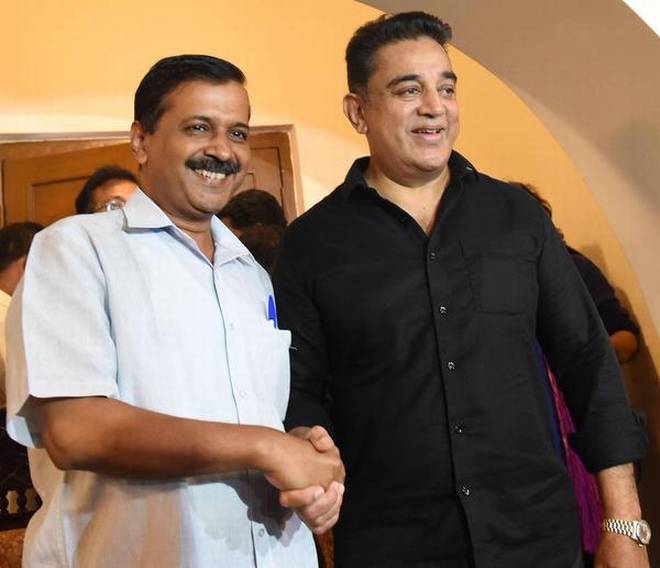 Like Rajinikanth, Hasan’s base at the time of launching the MNM is his network of fan clubs.

The launch of a new party by actor Kamal Haasan comes as a breath of fresh air in Tamil Nadu, which is yearning for change from the rot set in over 50 years of the rule of the Dravida parties. Haasan delivered his Makkal Needhi Maiam – Centre for People’s Justice – on February 21, amidst typical Tamil fanfare and pomp in the ancient city of Madurai. Earlier, he set out on his political journey to Madurai from Rameswaram, the native place of former president A P J Abdul Kalam.

The 63-year-old Brahmin who has acted in numerous films, mostly Tamil but also other southern languages and Hindi, speaks good English, is liked by the educated and the young and in touch with non-Congress and non-BJP politicians has taken a bold step that has stirred interest and curiosity far beyond Tamil Nadu. While Delhi Chief Minister Arvind Kejriwal flew down to share the stage with Haasan, along with AAP’s Somnath Bharti and Tamil Nadu farmers’ leader P R Pandian, Kerala Chief Minister Pinarayi Vijayan sent a video message.

The CPI(M) leader endorsed Haasan’s vision of socialism, secularism and pluralism and said that his plunge into politics would also enrich Kerala, where he is familiar for the Malayalam films he has acted in. Andhra Pradesh Chief Minister Chandrababu Naidu congratulated Haasan on his political venture, which is not surprising given that the TDP-BJP alliance is under strain. Bihar Chief Minister Nitish Kumar, too, was invited, but there was no word from the JD(U) leader who is away to Japan.

Ever since the DMK first swept to power in 1967, when a student leader of the anti-Hindi agitation defeated Congress titan K Kamaraj, Tamil Nadu has been under the sway of the DMK and the AIADMK led by first MGR and later Jayalalithaa. National parties including the Congress and BJP have had to ride piggyback on either of the Kazhagams to remain relevant in the state.

These five decades have also seen other Tamil parties — such as the MDMK of Vaiko, the DMDK of actor Vijayakanth, the short-lived Tamil Maanila Congress of which P Chidambaram was a founder-leader, the PMK of Dr Ramdoss – rise and fall, besides a variety of splinter groups and one-man parties which are not worth mentioning.

The question is whether Haasan’s MNM would be a passing breeze – pleasant, uplifting and diversionary? Or, would the MNM gain support and strength over time to sweep away the Kazhagam remnants surviving in the state’s political vacuum caused by the death of AIADMK’s J Jayalalithaa and the declining health of DMK chief M Karunanidhi?

Stronger political figures than Kamal Haasan, like, for example, Vaiko, have not gone far with his MDMK; which, though formed in opposition to the DMK and AIADMK went back to joining hands with those very parties. That fact that at one time most Dravida youth were flocking to MDMK did not improve Vaiko’s electoral prospects. More politically successful actors like Vijayakanth, once perceived to be an emerging third force among Kazhagams, too, floundered after the DMDK’s first flush of success in one assembly election. His MLAs were simply weaned away and few foresee a political future for Vijayakanth and his party.

Then there has been the eternal suspense superstar Rajinikanth, indicating his inclination to take the political plunge but stopping short of it. He is on the diving board again, but his fate in previous elections could serve as a salutary lesson to Kamal Haasan. During the 1996 general election, when G K Moopanar and Chidambaram launched the TMC, Rajinikanth rooted publicly for the DMK-TMC alliance and it won handsomely.

Eight years later, in 2004, when he came out in support of the Vajpayee-led NDA, it proved to be disastrous. He flopped miserably. The BJP not only lost the election, but was wiped out in Tamil Nadu. It blamed the AIADMK for this outcome and, the AIADMK, in turn, attributed its defeat to the alliance with the BJP. Now, Rajinikanth is again getting ready to take a political dive and while it is certain to create a splash, how far he can ride the political tide is a moot question.

Despite the best of personal relations with Rajinikanth, Haasan is not making common political cause with the former because his politics may be of the saffron hue. In other words, he may be a proxy for the BJP – launching his own party and, depending on how he fares, cast his lot with the BJP; which would try to gather members of the disintegrating AIADMK along with DMK leader M K Stalin’s family rivals and detractors from that party.

Like Rajinikanth, Hasan’s base at the time of launching the MNM is his network of fan clubs, which is much smaller than that of Rajini, who is a bigger star with a huge following. The fan club network is good for putting up a show at launch time, like a film premiere, but whether it will last for the run is anybody’s guess.

Fans are known to be fickle and more often than not they do not vote for their film heroes; their political loyalties are different. Besides, being a Brahmin is not a political advantage in Tamil Nadu; and, not only because the community accounts for less than three per cent of the population. There are a clutch of caste parties, the PMK being the best known, and other castes and communities have negotiated their political and other terms with either the DMK or the AIADMK over the decades.

Kamal Haasan is unlikely to crack this settled arrangement, particularly when the vote-share difference, in any assembly election, between the two Kazhagams is around four per cent or less. Of course, his expectation is that the leadership vacuum in the absence of Jayalalithaa and Karunanidhi would be an opportunity for him. That remains to be tested, and the odds are that he may not succeed in winning over influential or large sections from either Kazhagam.

The reason is that the very rationale – corruption – for founding his new party might prove to be Haasan’s undoing. The fight against corruption should and deserves to succeed when educated and young people are fed up of all-round and institutionalised corruption as a way of life, as it has come to be in Tamil Nadu. As Haasan himself pointed a-vote-for-Rs 6000 is the leitmotif of the state’s political culture. In no other state have elections been so completely and brazenly monetised. Neither the Election Commission nor public campaigns by successive retired Chief Election Commissioners has had the least effect on curbing money power in elections in Tamil Nadu.

As a result, all parties, including the BJP have come to terms with it for finding political space in Tamil Nadu. During one election campaign, an oblique reference by the BJP to the AIADMK’s corruption, saw Jayalalithaa telling them off. L K Advani and Govindacharya rushed to Chennai to make amends and mollify the Iron Butterfly – after all the alliance was more important to their political survival than fighting corruption.

The victory of the AIADMK’s T T V Dhinakaran, as an ‘independent’, in the December 2017 assembly by-election from R K Nagar, when he won against the onslaught of mighty forces and resources of multiple parties and their organisations in office at the Centre and the state, is an abject lesson on what can win an election in Tamil Nadu.

In spite of these odds, Kamal Haasan has set forth to join battle. He may well be inspired by the success of Kejriwal who won two successive elections despite the odds being heavily stacked against him by very powerful parties and their patrons, organisations, governments, ministers, MPs and MLAs along with their money and muscle power. #KhabarLive