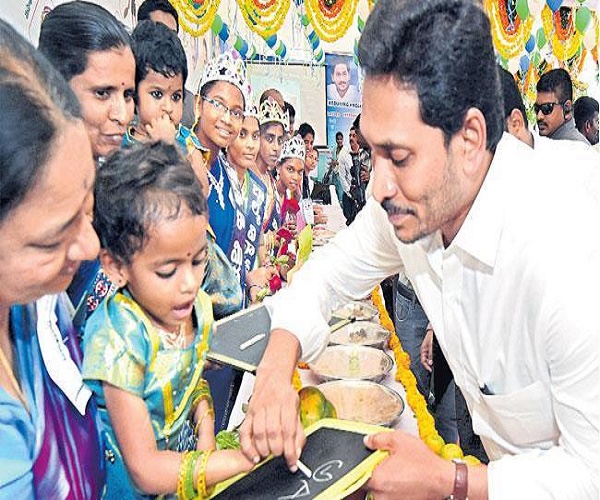 The New Education Policy announced by the Centre has kicked up a debate on whether the YS Jagan Mohan Reddy government can go ahead with its decision to introduce English medium in all the government schools.

According to one of the points mentioned in the NEP-2020, teaching in mother tongue will compulsory till Class 5 and thereafter, it has to be left to the choice of the students to go in for English medium or continue in his mother tongue.

This has triggered a debate as to whether Jagan should drop his plan to introduce English medium compulsorily in all the government schools from this academic year.

He has already made arrangements to that effect and his government has even arranged distribution of textbooks to the students from Class 1 to 6 in English medium.

Naturally, critics of Jagan have already started issuing statements that the state government has to drop its plan to introduce English medium in the schools.

Telugu Desam Party president N Chandrababu Naidu has tweeted that it is a welcome announcement from the Centre and wanted that the Jagan government should drop his English medium plan.

But sources in the Jagan government said the Centre has not made it mandatory for the states to continue the primary education only in the mother tongue and that there is no truth in the reports that the NEP-2020 would put an end to the state government’s plan to introduce English medium in the schools.

Sources said the NEP would only a sort of guide for the states and is not a mandatory document. Its implementation depends on the conditions in the state and their applicability to the local needs. There is no hard and fast rule that it should be implemented compulsorily.

“Since education is a concurrent subject, the NEP cannot be thrust on the states which will take a call depending on their respective conditions. The Centre has made it clear that the NEP can be implemented only with the support of the states and it cannot be forced on any state,” the sources said.

“Recently, the state high court struck down a petition seeking to introduce Telugu medium even in private schools, stating that it cannot go against the rights of the private school managements,” sources said. #KhabarLive #hydnews