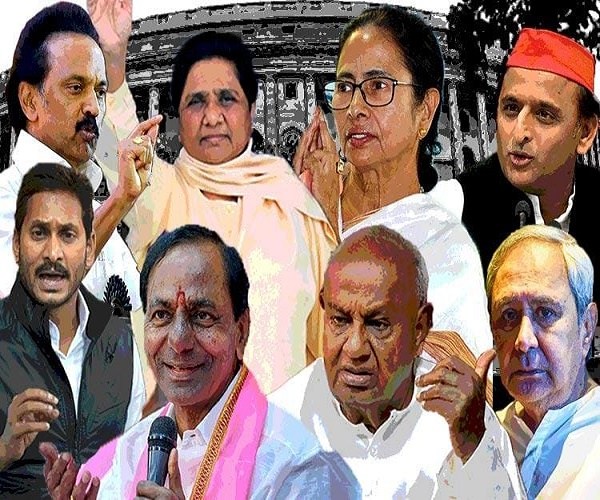 It’s no secret that several regional parties are hoping for a repeat of the 1996 Lok Sabha Elections. In fact, YSRCP Chief Jagan Mohan Reddy has made no bones about this, having in the run-up to the April 11 elections in Andhra Pradesh, “when the numbers come, I think there will be a hung Parliament. What I am hoping for is also a hung Parliament. Only then national parties will learn not to mock democracy.”

Jagan’s statement is echoed by several leaders from across the country, who believe the time has come for regional politics to be given their due. Whether it is Mamata Banerjee in West Bengal, K Chandrasekhar Rao in Telangana, or Akhilesh Yadav in Uttar Pradesh, the sentiment among these regional heavyweights is that 2019 will bring about a change of government, a change in coalition politics, where regional parties will together emerge king, and not merely play kingmaker.

Mamata, KCR, Mayawati among others may nurse Prime Ministerial ambitions, but does the math add up for any one of these regional leaders to really have a shot at the PM’s chair?

While many of these players have kept the door open for a post-poll tie up, the parties that have chosen not to align with either the BJP or the Congress in 2019 are the ones to watch out for on May 23. They are Naveen Patnaik’s Biju Janata Dal (BJD) in Odisha, Mamata-led Trinamool Congress (TMC) in West Bengal, KCR’s Telangana Rashtra Samithi (TRS) in Telangana, YSRCP led by Jagan in Andhra, and the Mahagathbandhan in Uttar Pradesh made up of Bahujan Samajwadi Party (BSP), Samajwadi Party (SP), and the Rashtriya Lok Dal (RLD).

ALSO READ:  Finding The 'Challenger' To KCR For The 'General Elections' In Telangana

The arithmetic
That’s a total 185 seats in just five states. If one were to go by their 2014 performance, the numbers by no means add up. Naveen Patnaik’s BJD swept Odisha winning 20 out of the 21 Lok Sabha seats. In West Bengal, TMC-led by Mamata Banerjee won 34 out of the 42 seats on offer, while in the two Telugu states Jagan’s YSRCP won 9 and KCR’s TRS emerged victorious in 11 out of the 42 seats in Andhra and Telangana together. The Modi wave swept Uttar Pradesh, which witnessed a multi-cornered contest in 2014, with BJP picking up 71 out of the 80 seats, with SP managing to bag only 5, while Mayawati’s BSP and Ajit Singh’s RLD drew a blank.

But much has changed in five years. The coming together of foes-turned-friends SP and BSP under the banner of ‘mahagathbandhan’ to take on the BJP in Uttar Pradesh is the most-watched battle in 2019. The stakes are naturally high for both the BJP and the gathbandhan given that there 80 seats up for grabs. With pre-poll surveys giving the SP-BSP alliance anywhere between 27 and 51 seats, Mayawati and Akhilesh Yadav will have a seat at the table in the event of a hung Parliament.

Chief Minister KCR has consolidated his hold over Telangana, having routed his rivals in the 2018 Assembly Elections and is expected to put up a similar performance in the Lok Sabha polls, his Federal Front ally Jagan is tipped to win big in neighbouring Andhra. The two Telugu parties are expected to bargain as a bloc.

West Bengal Chief Minister Mamata Banerjee is not expected to do as well as last time, but most polls predict only a loss in around 4 or 5 seats. While Didi has made it clear stating, that there will be no government formed without the TMC, she admits that PM will be decided only after the results. “They (the BJP) have only one arrogant man in him (Prime Minister Narendra Modi). But we have so many leaders who have credibility… So, we will decide it (on the PM face of the opposition alliance) later… Let the elections be over,” Mamata told a Bengali channel.

Four-time Chief Minister Naveen Patnaik, whose BJD broke away from a 11-year alliance with the BJP in 2009, has kept his all options open in a post-poll scenario, arguing, “Any party or coalition that supports the development just claims of Odisha will have our support.”

Counting on UPA allies
Even in the event of each of these parties sweeping their respective states, the regional bloc would still be well short of the magic number of 272. This is where other regional parties like the DMK and JD(S), both part of the UPA alliance, could come in. While DMK President MK Stalin was the first to propose Rahul Gandhi’s name for PM, he has told #KhabarLive that the Dravidian party would be open to supporting a regional leader in the event of a hung Parliament. Leaders like Andhra Chief Minister and TDP chief Chandrababu Naidu, and Telangana CM and TRS leader KCR have been touch with Stalin, having visited him in Chennai in the run-up to the elections. The DMK Chief had also participated in the mega opposition rally organised by Mamata in January this year.

Contesting in 20 out of the 39 seats in Tamil Nadu, Stalin could, very well, play kingmaker if DMK sweeps the elections.

Like Stalin, former Prime Minister and JD(S) supremo HD Deve Gowda has backed Rahul Gandhi for PM. And although the JD(S) is contesting only 10 out of the 28 seats, Deve Gowda could play a crucial role post May 23. Gowda, however, pointed out that regional parties cannot form the government without the help of the Congress.

Whether the regional leaders will be able to cobble together the numbers to stake claim to form the next government will be known on May 23, but the real challenge will then be in ensuring that several heads vying for the top spot remain united. #KhabarLive