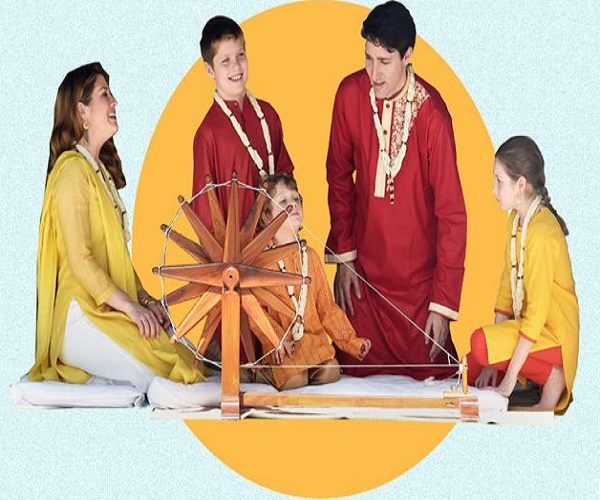 Justin Trudeau has been praised for his sock-diplomacy during earlier international visits. In a tense visit to India, Canadian Prime Minister’s desi wardrobe has generated as much chatter as his politics.

It’s a kind of reverse colonialism to want to mimic the ‘native’. Doing a kurta number as a salute to a culture is one thing, but Justin Trudeau’s display of trousseau like repertoire of multi-coloured kurtas has begun to grate.

There’s no doubt that he and his eminently photogenic family won eyeballs and drove many weak-kneed. But he missed the entire point that statesmanship is less about kurtas, kirpans, and chorus-girl-like line-ups with namaste and more about content, clarity and continuity.

While the dour uniform of global leaders can be boring, in Trudeau’s attire there is also an element of reducing India’s rich and varied culture into one cookie cutter embrace of what can best be described as the lowest common denominator.

Surely, Trudeau’s sartorial advisers, if he listens to them, could have kitted him out better. Statesmen conferring in Bali in droves oftentimes kit themselves out in shirts that prove to their worlds back home that ‘they were there’. But with Trudeau pushing an excess of this phenomenon on an Indian public somehow is not quite necessary.

Worse, he may have set a very high bar for other state visits, both for himself (imagine him in Kenya) and for other leaders (imagine Putin in dhoti) very high.

I think it’s actually quite nice to be able to go as a world leader to another country and adopt their culture. One should be applauding him for a job well done and not undermining his efforts. It is not easy to wear a sherwanis and/or a Nehru jacket when they don’t’ come naturally come to you. Trudeau is actually showing respect for Indian customs and dress.

There will be those who will cry cultural appropriation, but there are always two ways of looking at any particular situation. The logic of exoticising the Indian dress exits, yes. However, it doesn’t seem to be his intent and we shouldn’t let our sartorial politics colour what Justin Trudeau is doing.

To an extent his attire is designed to attract our attention, but why does that have to be bad thing?

He makes it look to easy to slip into the customs of a completely different society and other world leaders can do well to learn from him. Justin Trudeau is an incredibly good looking man, having him as a brand ambassador of Indian couture will do no one any harm.

The highest executive authority of a foreign country is visiting India to strengthen diplomatic ties and all we seem to talk about is the Emperor’s New Clothes. One has to be colour-blind not to see a trend emerging – from Rahul Gandhi’s Burberry jacket, to media houses calling Ivanka Trump a ‘fashionista,’ India’s obsession with sartorial matters stems from its refusal to talk about what we as a society fear will show us in bad light. We have created a smokescreen-kurta to deflect from a straining Indo-Canadian relationship, and have also not noticed the media’s refusal to put the policies of the poster-boy for liberalism under a scanner.

The echoes of ‘Khalistan’ have also resurrected themselves, and as reminders of Punjab’s tumultuous and bloody history flood our screen, we would much rather discuss cultural appropriation through expensive sherwanis. Trudeau’s use of the stereotypical ‘Indian’ aesthetic to appeal to our desi values, as well as the vast Indian diaspora settled in his own country, is obvious, and I don’t think we need to have a ‘Talk Point’ around it.

What we as a country do need to discuss is Canada vying to fulfill India’s energy deficits and the extremely detrimental impact Trudeau’s economic policies may have on the global environment. Canada wants to sell its oil, and sees India as the perfect energy deprived market to do so. Justin Trudeau sure is cute to look at, and when his even cuter children wear bright red and yellow kurtas, we almost forget that this isn’t a family vacation, or rather, it wasn’t supposed to be. The silence surrounding the actual politics of this visit is telling, as is the silence surrounding the ideological inconsistencies of Trudeau’s liberal project.

What does India as a country aspire to learn or take from Canada? Will we get the best of Trudeau, in the form of freedom of expression and liberal social values, or will we only choose to buy the oil from the rigs he approved? Or perhaps arms as the UAE does? #KhabarLive