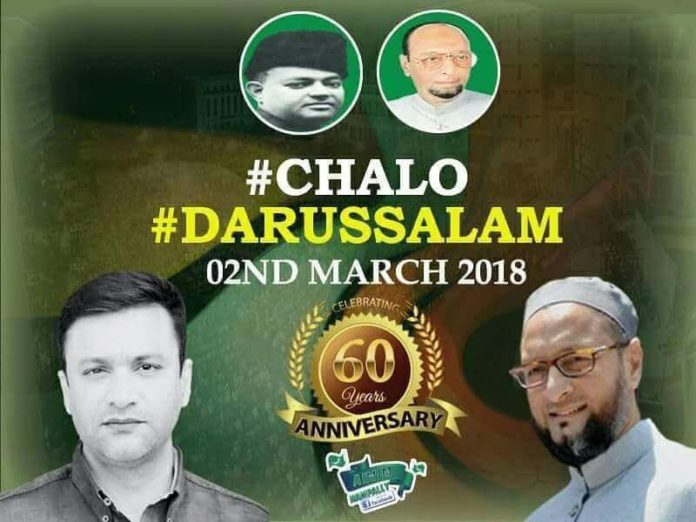 MIM feels it’s right time to expand its base in Telangana. Majlis-e-Ittehadul Muslimeen (MIM) will be celebrating the completion of 60 years of its formation on a grand scale across the country, wherever it has party units, on March 2. The MIM party was established on March 2, 1958.

The party high command communicated about the celebrations to be held in district units and asked the activists to organise events in their respective areas. A massive public meeting would be organised in Darussalam in Hyderabad marking the occasion.

All India Majlis-e-Ittehadul Muslimeen (AIMIM) president and Hyderabad MP Asaduddin Owaisi said that MIM had a humble beginning initially and with the inspiration of visionaries of MIM Abdul Wahed Owaisi and Sultan Salauddin Owaisi, it has now grown enormously and it is a force to be reckoned in Telangana.

He said the MIM has expanded its footprints in Maharashtra, Uttar Pradesh, Bihar, and Karnataka and even in Tamil Nadu. He said that in the coming days, the party will strive hard for the cause of downtrodden sections of the society, especially for the Muslims and the Dalits.

Party leaders and activists will hoist the party flag in party offices and meetings would be conducted to tell the people about the contributions of the MIM in the last 60 years and the party’s future course of action for the development of the country and welfare of the people.

ALSO READ:  The Monumental Mistake Of Compromising Our Monuments

Senior leader of MIM and Adilabad Municipal vice-chairman Farooq Ahmed said they will take out a bike rally on March 2 afternoon and will organise a public meeting in the town. He said that celebrations would be held on a grand scale in Nizama-bad, Nalgonda, Bodhan,Vikarabad, Adilabad, Sangareddy and Karimn-agar where the party is strong.

Sources in the party said the top leadership of the party is planning to expand it in Telangana and also contest in the next elections in the Ass-embly and Parliament constituencies where Muslim population is in considerable numbers, in Karnataka and West Bengal, like they did in Bihar and Uttar Pradesh in the past.

In the last general elections, MIM candidates fared well in Nizamabad Urban, Jubilee Hills, Rajendranagar, Uppal and Amberpet in Hyderabad. The top leadership of the party is of the opinion that it is the right time for the party to expand its base and emerge as a strong political force in Telangana.

The party has pinned hopes on the creation of new Assemblies in addition to the existing seats in Telangana so that it can bargain with the ruling TRS party for allocation of few seats where Muslim population is high for MIM in the next elections. But it seems that the BJP at the Centre is not in a mood to give clearance to the creation of new Assembly constituencies before the next elections. #KhabarLive