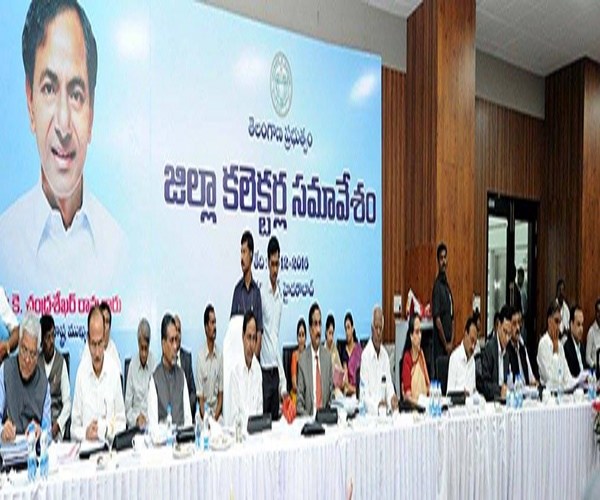 The Telangana government clarified the issue of posting of non-cadre officers as Collectors to three districts in the state has faced criticism from the IAS cadre and the media reported that discontent was growing among them.

Whether it is an IAS direct recruit or conferred IAS or a non-cadre Collector, it would not make much of a difference in the ever-changing scenario of district administration. In fact, a conferred or a non-cadre senior officer is much more experienced, matured and more informed than a direct recruit, since, s/he would have served in almost all subordinate positions.

The formation of new districts paved the way for young IAS officers to become District Collectors earlier than expected. But there is a haunting doubt that all is not well with a few of them. There are also apprehensions that some of these young IAS officers are unaware of the social and political equations prevailing in the districts to shrewdly deal with matters. There may or may not be truth in it. There might be avoidable lapses due to the ever-changing social scenario, lack of well-laid conventions as well as inexperienced approach to matters.

Shedding Responsibilities
With indications that the land management responsibilities would be shifted out from the purview of District Collector, the relevance of the Institution of Collector is likely to diminish. The Rythu Bandhu scheme has put an end to land revenue tax collection.

Abolition of revenue courts has already been mooted and a proposal to make agriculture officer in-charge of land registrations, in place of MROs, may see the light of the day. When seen from the angles of historic origin, need, concept, evolution, growth and importance of the Institution of Collector over a period, its diminishing role is apparent.

Even for other welfare activities, there is a direct chain of control and hierarchy down to the field level from top to bottom for delivery. Aasara pensions are directly monitored by State-level welfare departments, drinking water by the rural water supply or Mission Bhagiratha organisation, irrigation projects or power supply or for that matter any activity that hitherto was controlled by a District Collector is no more solely with her/him. S/he merely supervises them. Any experienced administrator — cadre or non-cadre — would be able to handle these responsibilities as effectively.

Evolution of the Position
The Institution of Collector and District Magistrate was created over 200 years ago suiting to the then needs. It was one of the most significant institutions transmitted by the colonial rulers to independent India’s public administration system. It was the highest functionary of the district administration.

SS Khera, a member of the Indian Civil Service and a former Cabinet Secretary, documented the need, concept, evolution and genesis of district administration in India. The institution has a long history. It was in existence during Mauryan, Gupta, Mughal and British eras — though with different nomenclatures.

Going back to the code of Manu, where village was projected as a self-contained republic, every thousand villages were grouped to make a district. If we divide the present number of villages (6,42,000) in the country by the number of districts (723), it is around 890. The ratio is more or less the same even now.

When East India Company became the governing agency of the British government in London, its principal representative in the district, originally known as supervisor, became the collector of land revenue and agent of the government in the district later. Warren Hastings created the Institution of Collector in 1772 and the hitherto supervisors were appointed as Collectors. From then onwards, collection of revenue became the most important duty of the company’s civil servants.

The office of the District Collector became an important institution of the British administration. The Collector’s role has gone through several changes since then. The Constitution of India is, however, silent on the district as a unit of administration or about Collector and District Magistrate except having a passing mention about district judges.

Until the latter part of the 19th century, no Indian was eligible to become a District Collector. With the introduction of open competitive examinations for the Indian Civil Services, the office was opened to Indians. Anandaram Baruah became the first Indian to be appointed as District Magistrate. The district continued to be the unit of administration after India gained independence in 1947.

In Telangana
As far as Telangana is concerned, until Salarjang reforms in 1864, there was no such institution. Originally, there were four Subas in Hyderabad State, namely, Aurangabad, Gulbarga, Medak and Warangal, each headed by a Subedar. Later, Subas were converted as districts and each district was headed by a Talukdar. At the district level, he was called as Avval Talukdar, followed by Duvvam Talukdar at revenue division and so on. Their role was to collect tax and credit it to Nizam’s treasury.

The District Collector also functions as District Magistrate and is responsible for the maintenance of law and order in the district. With the introduction of Panchayati Raj and local self-government institutions, a new situation was created in the governance at the district level. The Collector’s institution gradually became a coordinating agency.

New Needs
During the British period, the Collector used to belong to the Indian Civil Services and now belongs to the Indian Administrative Services (IAS) generally. The Collectors are expected to be agents of change, of good governance and of development and welfare administration, at the very base of our democratic structure.

However, over the years, their role has dramatically changed and is constantly changing with the adding of several development and welfare related functions. S/he is now more a facilitator and handles supervisory responsibilities instead of regulatory functions.

If only the Collector, who represents the government in the district, understands changing roles and responsibilities, then all would be well. It would then matter little whether the Collector is a direct recruit IAS or conferred IAS or a non-cadre senior Administrative Officer. #KhabarLive