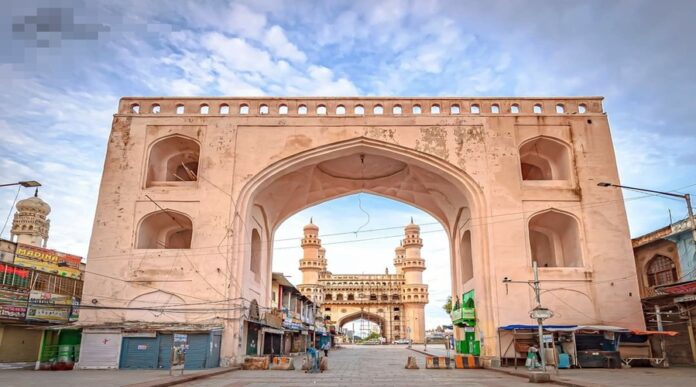 The royal grandeur ‘archial gates or ways’ to royal Nizam’s of Hyderabad is ‘Char Kaman’ located in old city area near to Charminar in Hyderabad. Char Kaman (meaning four gates or arches) are four historical structures in Hyderabad.

After the completion of Charminar, at about 75m feet to its north, four lofty arches known as Charkaman were built in 1592. The names of the four arches are Charminar Kaman, Machli Kaman, Kali Kaman and Sher-e-Batil-Ki-Kaman. Charkaman is notified as a heritage structure.

Built in 1592, a year after the formation of Hyderabad, the Char Kaman (the four arches) are of both historical and architectural value.

After the completion of Charminar, at about 75 metres feet to its north, four lofty arches known as Char Kaman were built in 1592. All four arches are at equidistant with each other with Gulzar Houz in the Centre. These arches were built by Sultan Muhammad Quli.

Each of the four Kamans (arches) were built for a purpose and they served as a gateway to the palaces or other structures of Royal importance. On the West was “Daulat Khanae Ali” (The gate of Royal residence); that on the East, the Naqqar Khana (gate of palace where drums are beaten), and general the Central area of the four arches was termed the “Jilau Khana” (Royal Vestibule).

These lofty arches are used as passages through which a huge elephant with a canopied litter can easily pass, are called (Northern) “Machili Kaman”. A big fish made of bamboo and paper resembling a miniature aeroplane is suspended in the centre of the arch on every lunar new year. The Southern arch was called Char Minar Kaman. The Eastern Kamaan was named the Kali Kamaan or Kaman of Shambhoo Pershad. The Western Kamaan was called Kaman Sher Dil or Shihr Batil (the arch of lion hearted or Magic breaker).

Syed Ali Asgar Bilgram in his book Landmarks of the Deccan published in 1927 had mentioned, “The Hyderabad Improvement Trust Board is now building excellent arches on either side of the road from Char Minar to Afzalganj by His Exalted Highness’ command.”

He had also mentioned that formerly the Qutb Shahi palaces were situated towards the western arch, but the relentless hand of time has total obliterated them. “On the eastern side was the entrance to the Royal palace which was approached after crossing a courtyard, 1,000 ft square; the gate of the Royal residence was a huge structure of sandalwood in which golden spikes were set. The adjoining outhouses were used as a sitting place for the nobles and officials. These noblemen used to come every morning with their retinue and attendants and after reaching the Royal vestibule which was in the centre of the four arches, the suite and retinue were left behind and they used to proceed unattended for the audience of the King.”

On either side of the Royal Gate a few elephants remained standing day and night and inside the gate 1,000 foot, 200 African slaves and 1,000 horse used to be drawn up in rank and file. “The four cornered octangular reservoir was intended for quenching the thirst of the army. In the southern enclosure was the Privy Council Chamber, in the Northern enclosure was the Royal Wardrobe house and other Royal offices; the Northern enclosure consisted of four apartments where soldiers, stewards, clerks on night duty and armour bearers used to sit. In Chandan Mahal ordinary armour bearers attended alternately; in Gagan Mahal, Turks, Arabs and Deccani armour bearers used to assemble and the main apartment was reserved for trustworthy servants,” Bilgrami mentioned in his book.

According to Tarikh-e-Zufra, Sajan Mahal was set apart for learned and virtuous men and the eastern enclosure was the public dining hall where thousands of deserving men were supplied with delicious food from the Royal kitchen every morning and evening.

The four roads of Char Kaman lead to different parts of the city. The Gulzar Houz used to be called as “Char-su-Ka-Hauz” (the four cornered reservoir). The old terrace with which it was surrounded was pulled down in 1895 AD for the sake of widening the path, and an iron fencing was fixed. The Qutb Shahi Kings used to sit on the balcony of the Royal residence facing the Gulzar Houz.

On the other hand, when the fifth Qutb Shahi poet-king, Mohammed Quli Qutb Shah conceived the plan for the new city of Bhagyanagar – later Hyderabad – a few miles from the overcrowded Golconda Fort town, he wanted it to be “a replica of paradise, unequalled in the world”.

Among the chroniclers of the time, some described it as mythical, some saw in it a poetic metaphor – the Sultan being the first Urdu poet to boast of a diwan – and yet others, that he really meant it. After all, sultans dream big and this section of chroniclers vouch that he came close to achieving it at least in creating that aura. The piazza, gardens, fountains, boulevards, palaces, sarais all set to a grand scale lent the city a breathtaking image in the late 16th Century, leaving a lasting impression on foreign travellers and traders who visited the city. For Abul Kasim Ferishta (1570-1623), who came after seeing the great Mughal cities of Agra and Lahore, there was “no city as grand and as impressive as Hyderabad”. French traders and travellers like Tavernier and Thevenot had similar impressions.

The city’s plan itself looked mythical. In tune with the Sultan’s imagination, the city was planned on a “grid-iron” pattern in the form of a giant double cross with two main intersecting roads, 60 feet wide running north-south and east-west. The intersection of two main roads, marked the city centre where Charminar was built in 1591, the city’s enduring landmark. Giving shape to the Sultan’s dream plan was his trusted poet – prime minister, Mir Momin Ashtrabadi, who introduced elements of his native Iranian city of Isfahan.

After the completion of Charminar, about 250 feet to its north, the great piazza of four lofty arches known as Char Kaman was built in 1592, in perfect symmetrical scale. These arches are separated from their centre by 375 feet and the space between two arches facing each other is 750 feet. The dimension of each of these arches is simply gigantic. Each of them is 60 feet high, 36 feet wide at the base and six feet in thickness. So imposing are they that in the past a huge caparisoned elephant carrying a canopy could easily pass through them. The effort that might have gone into their building was stupendous. The Char Kaman and the Charminar formed part of a “conscious urban design scheme of the Qutb Shahis. One cannot be separated from the other”. #KhabarLive #hydnews