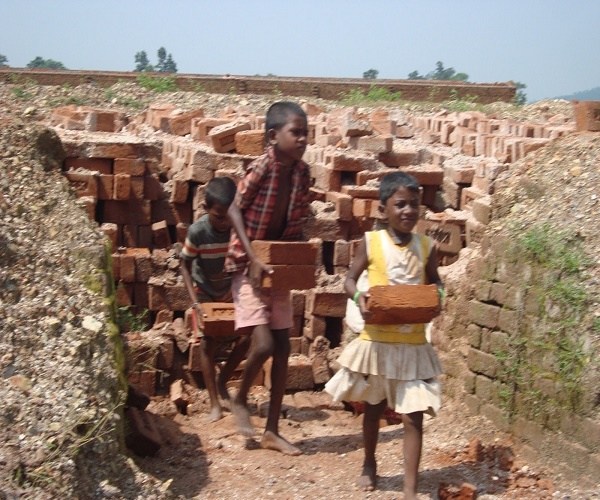 As many as 13 children were rescued from brick kilns in the outskirts of Hyderabad on Tuesday, many of these children were adolescents above the age of 14. Labour Department officials say, there could be cases of bonded labour at the brick kiln but require the Revenue Department to assess if the workers are paid below the wage limit set by the Minimum Wages Act, 1948.

The brick kiln named ‘CBI’ located at Kongara Kalan village, Ibrahimpatnam was found to be employing 13 children, 12 female and 1 male. The children have been rescued and transferred to a rescue home at Saidabad. “Most of them are adolescents, only two are below the age of 14 but brick kilns are a hazardous industry that must not employ adolescents. The owner of the brick kiln, V Chinniya was not present when the inspection was being held,” said Gangadhar Eslavath, joint commissioner, Hyderabad (TCs) with the Labour Department.

ALSO READ:  The 'Online Teaching' Business - A Real 'Setback' For Teachers In Telangana

Rajesh*, 34, works at the CBI brick kiln that was inspected on Tuesday by officials from the labour, revenue, police and child helpline. He, however, alleges that one of the officials was given by a bribe. “This was told by the brick kiln owner’s son. He threatened some of the workers that the money has been paid by his father and that the workers should not speak up,” alleges Rajesh who further added that the government officials first met with the kiln owner and only then met the labourers. “They came here for us. They should have come met us first,” he added.

The 34-year-old has been making bricks for the past few months and lives at the kiln with his family, his children don’t go to school. He gets paid Rs 1,000 for every 16,000 bricks, sometimes he struggles to earn even that. But even if he manages to earn the Rs 1,000 it’s not enough to meet his expenses.

Rajesh was paid Rs 1 lakh and promised good health care for his family, wages, a school for his children for seven months of work at the brick kiln. “The money that they gave me got used up paying some of my debt, and treatment for my wife in Odisha,” said the worker, “They make children as young as 11 years old work at the kiln. I am not afraid to say these things, my brother was brought here for work but he ran away and the owner came to beat me up then but my wife came in the way and protected me,” he alleges.

The Labour Department was informed about the existence of child labourers at the Brick Klin at Kongakala by Sushant Panigrahi, a journalist and human rights activist from Kaprakhol village, Balangir district Odhisa. Many of the workers working at the brick kiln named ‘CBI’ are from Kaprakhol and are people known to Sushant.

“The situation is very bad in the village, there have been successive droughts and many have gone into debt. Some have taken as low as Rs 20,000 from the middle man for a few months’ work. They are getting basic food, just to survive, but work for 18 hours, sleep for three and get one-hour break during the day,” alleges Sushant who is based out of Delhi and found out about the migration to Telangana during his stay at his village.

“They do not get medical assistance when required either. The brick kiln owner even asked a person who has a broken leg to finish his target of making bricks before taking leave. One family has to make 1.5 lakh bricks in a span of six to seven months and there is no agreement between the kiln owner and the labourer,” he alleges. #KhabarLive