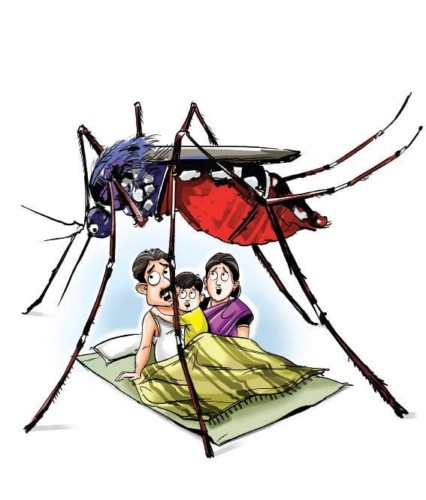 The mosquito menace that is tormenting citizens of Hyderabad is set to abate by the end of the week, said a public health official. “Day temperatures are rising and this seasonal phenomenon of mosquito nuisance will die out. We are carrying out extensive operations of cleaning up lakes and tanks of water hyacinth and grass, which provide breeding and resting places for mosquitoes,” said V. Venkatesh, chief entomologist of the Greater Hyderabad Municipal Corporation (GHMC).

The GHMC has been facing much online flak for the mosquito menace. One social media user wrote, tongue-in-cheek: “Mosquitoes City = Hyderabad City. I request our GHMC Commissioner and our KTR Sir to provide mosquito bat each and every person for their safety. In Hyderabad, a person can live without oxygen but not live without a mosquito bat.” The situation has come to such a pass that Nacharam corporater Shanti Saizen carried out a signature campaign on Tuesday in the area to draw attention to the mosquito problem and it drew a massive response with most citizens signing up. Officials said they were trying to clean up the Musi channel beside water bodies like Vennelgadda, Yellamma Cheruvu, Hashmatpet lake, Alwal lake and lakes in Malkajgiri and Saroornagar.

In some of the lakes, a fish species, gambusia, known for disrupting the mosquito life cycle, has been introduced.

“These are culex mosquitoes which are not vectors of malaria or dengue, and their number increases between February and March, leading to a number of complaints. This year, we received a number of reports, mostly from residents in areas around tanks and lakes where sewerage water is getting mixed with lake water along with garbage. We have deployed a large number of our staff to clean up the lakes to destroy the menace at the source,” said Mr. Venkatesh.

“Currently, we cannot even go for an evening walk around the apartment complex. Can’t stand in corridors for even a few minutes. Travelling in the elevator is also difficult because the mosquitoes swarm and bite. The area around our apartment is well maintained and clean but we don’t know where the mosquitoes are coming from,” said K. Vanaja, who lives in an apartment block in Hyderguda.

The enraged residents blame the lackadaisical attitude of the sanitation department for not cleaning the garbage on time, which has led to the ever-increasing filth in the local lakes.

The one thing that equally greets the 2 lakh-odd residents in every colony of Serilingampally ward is the unbearable mosquito menace. The evenings are so horrific that the helpless local residents stay indoors.

“We can hardly get to sit or even stand outside our homes during evenings. It has been ages since fogging machines have been used to keep the mosquito menace at bay,” complained a resident who is also a Greater Hyderabad Municipal Corporation (GHMC) sanitation assistant of Rajiv Gruha Kalpa. “Forget the use of bleaching powder to stop the growth of larvae, the office has no supply of it,” he added.
Meanwhile, a quick look at the bylanes of several of colonies bring to light the overflowing drains, in some parts, the untreated Gopi Cheruvu, water stagnated on the roads and garbage strewn along the Lingamplly railway road. The prevailing conditions in the division have put a multiplier effect on the increase of mosquito menace.

The enraged residents blame the lackadaisical attitude of the sanitation department for not cleaning the garbage on time, which has led to the ever-increasing filth in the local lakes.The situation has continued despite the corporator voicing to fight against the ill-effects of malaria in the ward through better sanitation methods.

“We have given representations to clean Gopi Cheruvu and the other small water bodies but nothing concrete has been decided on it by GHMC,” said R Nagendar Yadav, corporator of Serilingampally.
Meanwhile, Rupesh Dubey, president of Dubey colony welfare association, said that the corporator has been cooperative on several fronts but there has been a serious delay in the release of funds by the government.

“A sum of `13 lakh worth of road projects are yet to commence in our colony. It has been four months already but the government has not yet released any funds,” he said.Colonies such as Pappi Reddy Colony, Nehru Nagar, Gopi Nagar, and Lingampally have been plagued with this menace. Meanwhile, the corporator has teamed with an MNC, Cyient, to build schools that are accessible to weaker sections of people like Surabhi colony and Rajiv Gruha Kalpa.

“Personally, I invested `30 lakh to see that free education is imparted to the children,” Yadav said. Meanwhile, about 1,000 residents residing in Bombay housing scheme complain that they get water once in four days.

The comparatively high temperatures this winter have encouraged mosquito breeding in Hyderabad.

Four mosquito species that were uncommon in Hyderabad and mainly found in villages, have invaded the twin cities.

The comparatively high temperatures this winter have encouraged mosquito breeding in Hyderabad.

Four mosquito species that were uncommon in Hyderabad and mainly found in villages, have invaded the twin cities. Now there are seven types of mosquito species in the city – Anopheles, Culex, Aedes, and Mansonia.

The mosquito menace reported across Greater Hyderabad and the Secunderabad Cantonment area is serious. “Swarms of mosquitoes attack us; we have to shut our doors and windows after sunset to elude the nuisance,” says Aarti Devi, a resident of Srinagar colony.

She says the mosquitoes hide in corners and under furniture in the daytime and get active at night. “Mosquito repellent has to be on through the evening and night,” she added.

For a majority of people in the city this is not a seasonal problem but persists throughout the year. The two techniques adopted by the GHMC – anti-larva and fogging – have proved unsuccessful.

Complaints on the mosquito menace pour in from Mehdipatnam, Asifnagar, Shali banda, Marredpally, New Bowenpally, Alwal, Keesara, Kondapur, Quthbullapur, Serilingampally and many others.

“It is intolerable and disturbs our sleep apart from the constant fear of exposure to diseases like malaria and dengue. This problem is troubling us in particular, regardless of the fogging operation,” says Bala Krishna of Radhika Colony in Secunderabad.

Dr C. Srinivasulu, assistant professor at the Wildlife Biology & Taxonomy Laboratory at Osmania University, explains that “the troublesome, disease-transmitting and nuisance-causing species are Anopheles, Culex, Aedes, and Mansonia genus. Mosquitoes have a varied lifespan, ranging from a few days to several months. Some species in general and many in colder regions live during warmer months and die in winter.”

He explains why February is a particularly bad month. “Mosquitoes deposit their eggs in water. The eggs in winter through the process of diapause (arresting of growth) pass through the colder climatic conditions to hatch when optimal temperatures are available, which coincides with the month of February. The small climatic change brought with the onset of longer days and warming environment favours mosquito emergence, and it is usually during this period that mosquito menace is reported.”

The municipal corporation agrees that January and February are the worst months. Venkatesh V., chief entomologist of the GHMC, says the main breeding grounds are tanks, nalas and sewerage pools.

“GHMC is carrying out spray operations to arrest and destroy the eggs. For larvae-turned-adults, fogging operations are carried out. GHMC is doing its part, but we need the active participation of citizens to eliminate the menace, like getting rid of stagnant water in vessels, coolers, pots and even wash basins. Unless the breeding source is eliminated, the nuisance cannot be curbed.”

While private spaces are within the purview of individuals, public spaces come under the GHMC and these are the spaces where stagnant water collects, in the rubble from dug up roads, leaking sewage and water lines and uncleared garbage. #KhabarLive