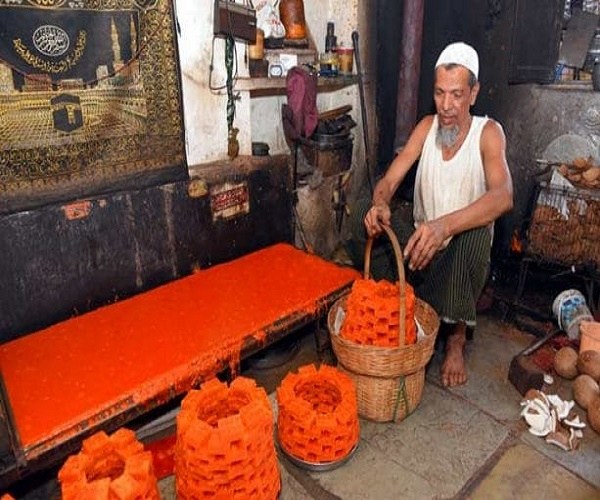 Khopra Mithai lelo, Nariyal ki mithai taazi taazi lelo – shouts the street seller of this delicious home-made coconut sweet in old city of Hyderabad. Its the early hours of the day and in the back yard of Mecca Masjid, Mahmood Bhai, in his 70’s, is busy making sweet cubes – Nariyal-ki-mithai, a confectionary many relish irrespective of age.

The ‘Mahajareen camp’ behind the Mecca Masjid houses one of workshops where the ‘Nariyal ki mithai’ popular known as ‘Kopra mitha’ for the sweet is generally savoured along with a piece of coconut, is prepared. Only a handful of workshops remain in the city and the trade is run by the second and third generation members of a few families.

“We start our preparation in the early hours and ensure that the confectionary is ready by 9 am. Small time vendors come and buy it from us to sell it in markets and residential colonies in and around the city,” said Mahmood Bhai.

A second generation man in this work, Mahmood took over the vocation from his father decades ago. “Actuallly hailing from Karnataka, we came and settled here post partition era. My father started this business here and later I continued it,” he recalls.

The rising prices of the ingredients such as sugar and coconut have been casting a shadow on the profits. “Coconut costs Rs 20 in wholesale market and with the onset of summer, the prices will see a steep hike. Sugar prices increases too frequently,” Amjad, another maker of Nariyal-ki-mithai, says.

The earnings are dwindling and increasing the prices would mean loss of business for them. “We sell the produce at half the market price. For instance the smaller sweet piece is sold for Rs 10 while the larger for Rs 15. Imagine what we would earn through it, its wholesale trade but we are continuing the legacy,” said Amjad.

The few, who are engaged in the vocations are in Charminar, Tallabkatta and Jhirra Asifnagar areas. It is a tough job as one has to wake up in the early morning mash the coconuts, make sugary syrup and complete the mixing process. “For three to four hours at a stretch you have to sit in front of the big stove,” says Mahmood Bhai.

A few hundred vendors buy the sweet from the eight confectioners who prepare it, and sell it across the city. These confectioners a decade ago numbered around 25 and the numbers have been coming down with passing of years. The younger generation in the families of the confectioners avoid the job as it pays little and because of the strenuous labour it entails, says Mohiuddin, another trader.

Realising the demand for the sweet, many sweet meat shops in the city too stock it. Nevertheless, people still prefer to rush out of their homes to the familiar shout of vendors, ‘Nariyal-ki-mithai’, and relish it. #KhabarLive