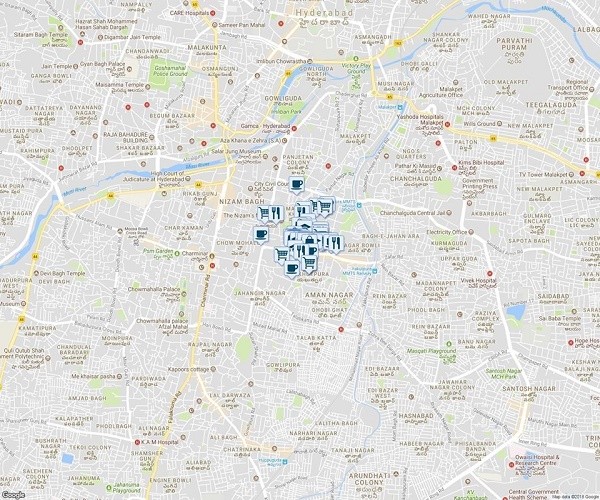 When we look at the history of this constituency, earlier it was called as ‘Asaf Nagar’. Once upon a time it was in MIM party’s kitty. Dr Vizarat Rasool Khan, great educationist of Hyderabad from MIM was two time MLA from Asaf Nagar Assembly Consitutency in 1983 and 1985-1989.

In the next election Syed Sajjad won from this seat on MIM ticket. Dr Vizarat Rasool Khan lost the election in 1994 on MBT ticket to D.Nagender. Later due to fighting and division of votes between MIM and MBT candidates in 1994, D. Nagendar from Congress party won the election. He was amongst some surviving Congress MLA in Hyderabad City, during the landslide TDP win in 1994.

Although Nagender won this seat for the first time as well as became MLA for the first time, he worked hard and brought people into his confidence. The next election too he won easily in 1999. Similarly when he wanted to contest 2004 election from the same seat, the Congress party high command wanted him to actually contest for the Secunderabad Lok Sabha seat.

Due to various faction fights between Congress leaders in Hyderabad, and sensing that they may work against him, Nagendar avoided the Lok Sabha ticket. At the last moment, he was given TDP party ticket by Chandra Babu Naidu, ex Chief Minister of Andhra Pradesh. Surprisingly he won against Haji Seth, the MIM candidate and a famous businessman of Hyderabad. He was lucky to win the election, but luck was against him at the state level.

To his surprise Congress party won the state elections and formed the Government under Y. Rajasekhar Reddy. Nagendar got confused and after 6 months went for re-election and to our shock lost the election to Moazam Khan of MIM party by just 2000 votes. After some time Nagendar took political sanyas.

Because of such changes in 2004, and MIM winning by a slight margin, this seat looked very disturbed and showed signs of tilting towards any candidate. A young and dashing real estate, businessman Feroz Khan slowly showed signs of contesting the seat. The seat was renamed as ‘Nampally’. Feroz Khan got the ticket from the newly found Praja Rajyam Party to contest this election. He worked very hard, went to every locality to canvass. Feroz Khan having a lot of youth following and ample wealth, had all the qualities to give a tough fight in this seat.

Unfortunately at the last moment, many of his youth leaders betrayed his trust, changed loyalties and jumped into MIM party. In 2009 the result was around 33,000 votes gained for MIM candidate Virasat Rasool Khan and 27,000 votes gained by Feroz Khan. People almost believed he would win the election.

In 2011 , the Praja Rajyam party merged into Congress party. A new problem erupted on Feroz Khan as Congress party was in alliance with MIM then, and because of such alliance, MIM would not give away the seat.

With lots of hope and assurances by Congress high command, he kept working and started providing water to needy people free of cost by delivering it by water tankers for 2 years. So next election time came in 2014. Although a rift happened between Congress and MIM, still Congress was not ready to give ticket to Feroz Khan. He found that no party was giving ticket to him due to influence of MIM, and finally got the ticket of TDP party.

There was a new problem for him as TDP was aligned with BJP for elections and BJP is supposed to be not a well wisher of minorities. The MIM had a easy point to prove and won the public perception. Even Feroz Khan’s party workers were beaten up in First Lancer area on the day of polling. Still Feroz Khan gave a good fight and got about 48,000 votes where as Jafar Hussain Meraj of MIM got about 63,000 votes.

As we can see the candidates of MIM party in 2004 regular election, 2004 by-election, 2009 election and 2014 election were different candidates, but the party has been consistently doing a great job in this constituency. One reason political pundits say is the strong loyal vote bank of the MIM party and its perception as the main representative of muslims in Hyderabad.

Although there were rumours that Majid Hussain ex-Mayor of Hyderabad, or Yasser Arafat, MIM leader may be given Nampally seat this time, but MIM has for the first time repeated a candidate and declared Jafar Hussain Meraj as its Nampally Constituency candidate for 2018 Assembly Elections.

Feroz Khan, after losing the 2014 election had taken political sanyas and was not seen much in public life. Recently he joined the Congress party again and is actively canvassing in Nampally division. As Congress and MIM have broken their alliance long back and Congress wanted someone strong to give head-to-head competition to MIM party in Nampally Constituency, it is said that Feroz Khan would be the ideal candidate for Congress party from Nampally.

The TRS party has given only 2 seats to minority candidates out of 105 announced and is banking on MIM’s support to gain minority votes throughout the state. This keeps TRS out of competition, from Nampally as a respect to MIM’s seats. This time in 2018, it looks like a straight fight between MIM and Congress. A lot of youth and party cadre is with the MIM party as it is sitting on this seat since 14 years.

Also there are no major allegations and negativity against the sitting MLA Jafar Hussain Meraj. Although Feroz Khan has a lot of youth following and energy to canvass very hard, but he has to bring something new to the competition to gain advantage over such a strong party and opponent.#KhabarLive