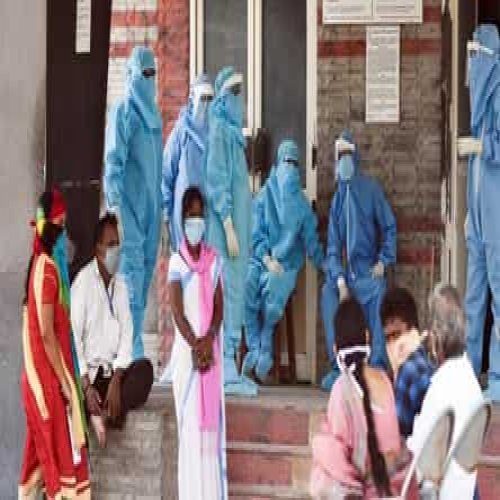 The fight against Covid-19 in Telangana has become mired in a political slugfest between the Telangana Rashtra Samithi (TRS) government and the opposition parties.

With the daily jump in new infections almost touching 1,000 and the state touching a new high with each passing day, the criticism of the government’s response to the crisis is also mounting.

Public Interest Litigations (PILs) filed by activists and the reprimands received by the government from the High Court has given ammunition to the opposition to attack the government, which claims to be handling the situation effectively and sees a conspiracy by “vested interests” to malign the government and state-run hospitals.

The Centre’s assessment is that between June 10 and 23, Telangana had the highest positivity rate in India at 27.7 per cent (ratio of people testing positive to number of people tested) and the latest data that Telangana is doing lowest number of tests per 10 lakh population at just 2,356 has also come handy to the opposition.

What has worried the experts is the fact that Hyderabad is recording a high positivity rate. On June 23, the city recorded India’s second-highest positivity rate at 32.1 per cent, after Mumbai at 33 per cent.

A low number of tests, no permission to private hospitals to conduct tests and treat patients, no supply of Personal Protection Equipment (PPE) kits to doctors and other healthcare professionals, lack of transparency in the information being provided to people and no tests on dead bodies were among the issues on which some activists moved the Telangana High Court.

Following the censure by the court, the government on June 14 permitted the private hospitals and labs to conduct the tests and also announced 50,000 tests in the worst affected Hyderabad and surrounding districts over one week to 10 days.

The next day, the government came out with a tariff structure for tests and treatment in the private sector. The process of mass testing by the Health Department in containment zones of Hyderabad and surrounding districts began on June 16.

The government had hoped that the two measures would help the opposition attack. Chief Secretary Somesh Kumar had stated that the tests were aimed at giving confidence to people in view of misinformation that there is high prevalence of Covid-19.

However, both the moves appear to have boomeranged on the government. The cases, which were already on rise since the beginning of June, rose further with a jet speed.

The authorities, which never shared information with regard to tests conducted on a daily basis, started doing so from June 16 following the court order.

It was on March 2 that Telangana had reported the first Covid-19 case and the activists and the opposition point out that this is one of the lowest numbers of tests conducted by states of equal population size.

The former minister said the TRS government has not shown the seriousness in tackling the situation. “It neither conducted the tests on its own nor allowed private hospitals to do it. Now after permitting the private hospitals following the court’s intervention, it is blaming them for high positivity rate,” he said referring to the notices issued to 12 private labs for discrepancies in the test results.

“The people of Telangana are sitting on a powder keg because of the government’s failure to handle the situation by conducting adequate number of tests,” said Shabbir.

ALSO READ:  Are 'Hospitals' In Hyderabad 'Preying On Patients’?

He believes that testing would help people to detect the problem at early stage and take necessary precautions.

“This disease requires testing, testing and testing. It’s inadequate in Telangana,” said Professor P. L. Vishweshwar Rao, who filed few Public Interest Litigations (PILs) in the High Court with regard to the state’s failure in tackling the situation.

He pointed out that out of 33 districts in the state, only three districts have some semblance of testing. “How will people from places like Khammam and Mancherial will travel 300 km to Hyderabad to get tested,” he asked.

“Why are people being turned away from Gandhi Hospital,” asked Vishweshwar Rao reacting to Health Minister E. Rajender’s claim that only 650 out of 2,000 beds were occupied at Gandhi Hospital, the state nodal centre for treatment of Covid patients.

He pointed out that even private hospitals have no beds and referred to the reported death of a couple of patients after running from one hospital to another.

“Situation both at government and private hospital level is uncontrollable in the sense they have no control over it. Though the government fixed the tariff for private hospitals, they are not following it and are insisting on payment of Rs 2 to Rs 4 lakh in advance.”

Referring to steps taken by Kerala and Delhi governments to contain the pandemic, the Professor said this kind of commitment and planning is not being shown by the Telangana government.

He lamented that Chief Minister K. Chandrashekhar Rao has not visited Gandhi Hospital even once. “His priority is Haritha Haram (plantation programme) and not the pandemic,” he said.

Health Minister Rajender, however, maintains that nobody can question the government’s commitment to save lives and to provide best healthcare services to people.

“Telangana was the first state to enforce lockdown and it strictly implemented it and took several measures to contain the spread,” he said.

He blamed the opposition and “some people with vested interests” for running a misinformation campaign to malign the government hospitals.

“The doctors and other staff in government hospitals working hard day and night and even risking their lives to perform their duties but a false campaign is being run on social media to target them,” he said.

The minister also dismissed the criticism on low testing saying the government was going by the guidelines of the Indian Council of Medical Research (ICMR).

“The ICMR guidelines say only those with Covid symptoms should be tested. We are following these guidelines,” he said.

According to health officials, 8,785 people are currently under treatment either at hospitals or at their homes. #KhabarLive #hydnews