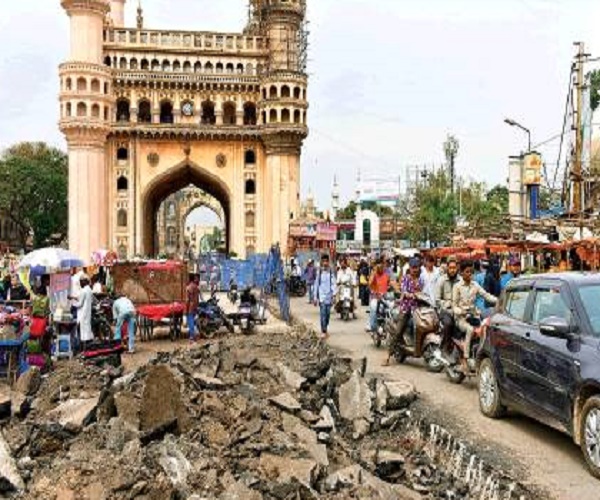 Civic authorities should restore roads and fill dug up areas as fast as possible to ensure commuters do not face any problem. Its unfortunate that some contractors get away with digging up a place and not restoring it properly. Commuting woes continue to haunt denizens as many busy stretches, connecting roads and bylanes continue to be dug up to carry out civic works.

Traffic continues to come to a halt in many places, including Nehru Nagar in Maredpally, Secunderabad, where authorities are laying a water pipeline. Similarly, roads in Malkajgiri Circle and Alwal circle have been dug up for laying water pipelines. The problem is work in all these places is moving at snail’s pace.

ALSO READ:  Hyderabad Police's 'SHE Wing' 'Making A Difference' In Many Lives

Commuters using the road along Geetha multi-speciality hospital at Nehru Nagar, Marredpally complain about the dug up road which has not been restored over a month after the work began.

“Many people use this road to go to the Secundrabad court and reach places near Maredpally Police Station. I request the authorities to restore the road immediately as it has turned into a major connecting road and the primary route to enter many residential colonies,” said Krishank T, a bank employee who uses the road on a regular basis.

Similar grievances were aired by the people using roads connecting residential colonies in Alwal circle. The roads which are the primary entrance to Venkatraopet, Ramnagar, Old Alwal, Bhudevinagar and West Venkatapuram are in extremely bad shape. These roads have been dug up to lay a water pipeline in the area. People say after the roads were dug up, the authorities did not restore it, leaving locals irked.

“We already go through a lot of trouble commuting on the main roads due to the traffic menace. And once we cross the busy stretches we have to struggle through these colony roads, which is a bigger menace,” said K Srinivas Varma, general secretary, Loksatta Greater Hyderabad and a resident of Alwal.

Residents also say they were forced to park their cars far away from their homes due to dug-up roads. “The roads are so bad that I fear my new car will get damaged if I drive through these roads. I am forced to park my car at my friend’s place, which is around 150 meters away and walk to my home daily,” said a resident of Venkatapuram.

Syed Nadeem, one among several people who complained about the dug-up road at Charminar, said the work has worsened the situation on the stretch, leading to a crunching of the road space. #KhabarLive

(Did you have a bad experience on the road today, or were stuck in traffic for long? And do you live in an area that needs attention? Please write about your experience to hydnews@gmail.com and we will take it up with the authorities concerned.)