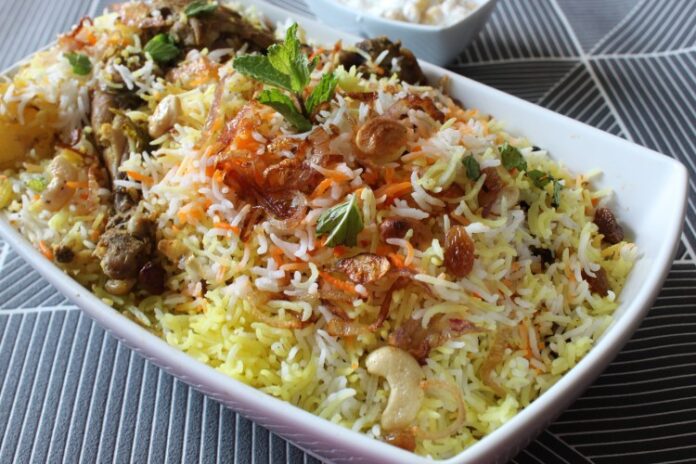 The niece of the 7th Nizam of Hyderabad is sharing her family’s culinary secrets to know the Nizam’s taste buds and a talented genius host for a feast.

Past a heavy wooden door flanked by trellised walls, through an arched passage that runs under a ceiling embellished with intricate patterns, moonlight sneaks in through metal bars in windows on one side of the gallery to gently light up art that adorns a parallel wall. Even more beautiful is the gentle tinkle of laughter trickling from a room at the far end.

Inside, giggling children stand around a stern ancestor as she taps an attendant with the tip of her cane, diamond bangles jingling with each movement of the bony wrist. With the end of a rope tied to his big toe, the attendant who was to fan the dining family has dozed off, and although his programmed foot successfully operates the colonial ceiling fan, his snores are unacceptable.

This memory is one of several from Kunwar Rani Kulsum Begum’s past, one that was dominated by her grandmother Buggo Begum, the force behind Reza Yar Jung Haveli in Darushafa in Hyderabad.

Neither Kulsum, niece of Nawab Mir Yousuf Ali Khan Salar Jung III (former prime minister of the seventh Nizam of Hyderabad), nor her sister were allowed into the kitchen. The family’s culinary secrets would only be passed down to the dulhan ranis — women who married into their family — not those who’d secede to another.

Kulsum Begum is a shade more generous with sharing secrets, though. The food consultant with ITC hotels has opened up a treasure of royal Hyderabadi recipes for a special menu that’s being served at the hotel’s Parel property until today.

“The recipes I’ve shared are my nani’s (maternal grandmother). My dadi was tight-lipped, although I did manage to eek them out of my sister-in-law,” she smiles.

It was the same with every royal family, says Begum. “Guests would compare preparations at parties, each one trying to outdo the other. Keeping secrets fuelled healthy competition between the ladies.”

In fact, Begum reveals, young girls weren’t taught cooking. It was assumed they’d have khansamas. “Even when we travelled, our kitchen staff would accompany us, preparing a spread of safari food — pathar ke kebab prepared on heated, unpolished granite,” she says. A girl was meant to cook, keeping her husband’s preferences in mind. “She may as well learn that at her sasural then.”

Married at 16 into a Lucknow family, Begum wrote copious letters to her nani, moping about missing her food, eventually convincing her to share recipe through detailed letters. “Lucknowi food is sweeter,” she explains with a warm smile, “while in Hyderabad, we like khattan — tartness — in our food.” The ghosht ka shikampur that’s available on the menu she has designed, supports her observation. A layer of curd and chutney are ensconced in the aromatic, melt-in-the-mouth meat patty that dwarfs American portions.

“You youngsters don’t eat enough nowadays,” she says, reminded of how her family pampered her when she lost weight around her teens. “They insisted that I do nothing but sleep and eat, and my mother brought me food in bed.”

Back then, Begum recalls, people assumed that a young girl was thin only because she was ill. Or that the family had met a misfortune. And so, food was rich. “Dry phulkas only made it to the dastarkhan (dining place) when a family member was unwell.”

Naturally, a job, even as a five-star food consultant, was never on the cards. The first time Begum cooked, she put salt in the kheer and made five kilos of biryani for four guests.
But her husband was supportive, and with 300 recipes now perfected over decades, she has no qualms inviting the whole city to test her culinary skills.