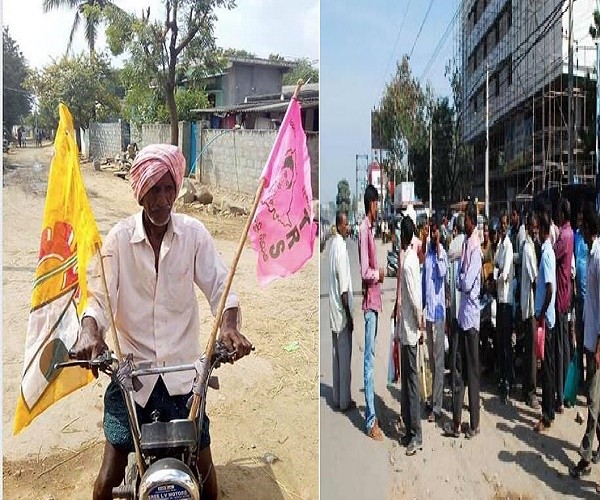 ‘Loyalties” are short-lived here. They may last a day or even just a few hours. It all depends on the reasons they are engaged and paid for. Many of the contestants in the fray for the Assembly elections are facing a shortage of campaigners and are looking at the city’s well-known “addas” that supply coolies to builders and contractors.

For a change, these “addas” have turned into providers of campaigners, and there is no discrimination of caste, creed or religion. Whether those engaged for the task is an elector or not, it is immaterial. No matter whether the one donning the role of campaigner is a Bihari or Odiya.

With the electioneering entering the crucial phase in the State, nominees of political parties and independent contestants planning to contest the polls are facing big scarcity of campaigners.

ALSO READ:  The Inside Secrets Of Millionaires Under The Age Of 29

Some leaders are finding it difficult to find a few people to accompany them during the campaign. It is more so with elite colonies where in many view polls inconsequential.

But the ‘addas’ can provide the services they needed for a price. There are not many takers for jobs such as flag bearers and pamphlet distributors. Hence, leaders are increasingly turning to coolie ‘addas’. What ‘adda campaigners’ get at the end of the hard-day electioneering may not always be handsome. It varies from candidate to candidate and their generosity, says Daniel, an electrician-turned-campaigner from Balajinagar in Jawaharnagar police station limits.

Five-hour campaign, starting from 10 am, will fetch Rs 500, with a biryani packet from famous food joints and a bottle of beer or a quarter liquor of cheaper brands.

Additional incentives such as Rs 100 recharge for their mobile phone numbers are offered for the youths taking part in the campaign. Women campaigners were being preferred of late. As they were sincere to the task, they have been entrusted with.

Contestants canvassing for support of people in colonies are preferring women as they can easily gain access to women voters besides being more effective in vote-seeking. Moreover, they are usually not booze seekers.

Those with required awareness on political parties and candidates in the fray can explain about them in a better manner; hence, they being paid Rs 700 a day. For over a fortnight, adda coolies stopped going to their regular works. So is the case with plumbers and masons.

Ramulu, a daily coolie, says it pays to be a campaigner at this juncture. Some of the contestants are in the thick of their campaign while some are yet to start. Campaigners are hopeful of a rise in their remuneration once the election notification was issued.

ALSO READ:  Is Hyderabad Metro 'Failing' The Mobility Test By Registering Daily 'Low Foot-Fall' Of Passengers On Every 'Metro Trip'?

It is indeed a good time for youths in need of jobs. The assignment could be temporary. They can make some money before campaign comes to an end. Youths from Bihar, Chhattisgarh and Odisha living in the city slums making big money by taking up an hourly based assignment as campaigners. Hundreds of them are living in colonies adjoining High Tension Road in AS Rao Nagar.

People from other States do not have votes, but they do make a considerable impact on local voters, says Chinna Reddy, owner of a pickle factory in Yapral. #KhabarLive