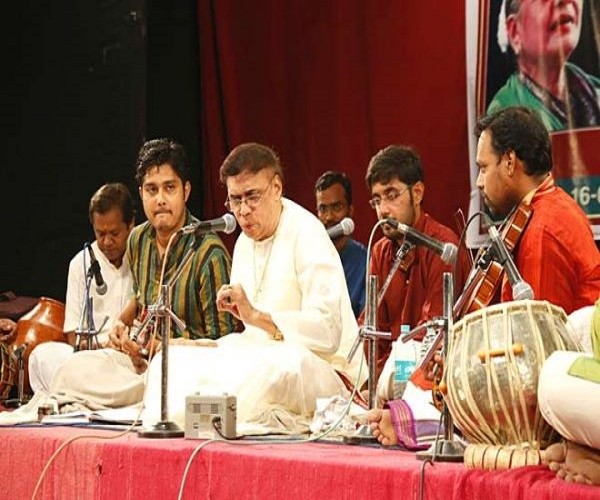 Whistling an unorthodox art of humming ragas, which was once defied and turned down by classical musicians, is now creating waves beyond boundaries leaving audiences spellbound. Having started it as a casual hobby during his childhood, Komaravolu Sivaprasad who is fondly called, among his circles, whistle wizard, traces his journey of how this untraditional art has taken a complete classical art form.

In a freewheeling chat with #KhabarLive, Eelapata Sivaprasad shares memories of training with guru Mangalampalli Balamuralikrishna and PV Narasimha Rao’s penchant for music.

Born into a family of mathematicians and music lovers in Bapatla of Guntur district, Sivaprasad grew up listening to Carnatic music and keerthanas sung by singers of those times – Choudaiah, DK Pattamal, Dwaram Venkataswamy Naidu, and MS Subba Lakshmi. “My uncle Padma awardee Prof K Chandrasekhar, an eminent mathematician, used to bring gramophone records from Chennai every time he visited home in Bapatla during holidays. My elder brother was the one who first started humming the ragas by whistling. Later, I picked it up and started imitating devotional songs that were played on radio,” recalls Sivaprasad.

A famous Harikatha artiste Mulukutla Sadasiva Sastry from Tenali was once invited for a concert in Bapatla. As the train he was travelling was delayed by two hours, about 1,000 among the audiences who gathered at the venue were growing impatient. By then, by word of mouth, Sivaprasad’s Eelapata has gained prominence among the villagers. And the organisers took no time to call the 12-year-old Sivaprasad on to the stage. With the very first song that Sivaprasad rendered through whistle, the crowd was awestruck and exalted.

“And for the next 45 minutes, I continued singing keerthanas and other devotional songs. Sadasiva Sastry had waited far among the crowd and he later blessed me with a garland of flowers. He even said when whistling in temple is prohibited, you have broken the dictum by giving a new expression to the art form,” Sivaprasad said.

If it was former politician Konda Prabhakar Rao who recognised the potential in the young Sivaprasad, prominent Carnatic vocalist Mangalampally Balamuralikrishna is the one who nurtured him and imparted several techniques to him to elevate the untraditional art.

“It was in 1981, when I was pursuing my degree at Ramakrishna College in Adikmet, the then former Speaker Prabhakar Rao introduced me to Balamuralikrishna at a music concert which was organised by Raaga Sudha in the city. After listening to my song, Balamuralikrishna told me that I have eternal parents – one is sruthi and the other is laya, and left the venue.

Before leaving for Madras (now Chennai), he put in a word to Prabhakar Rao that he would write a letter to me. After 10 days, I received a letter from Balamuralikrishna asking me to come to his residence in Madras. As I alighted in Madras railway station, he sent me a car with a driver to pick me up. Then, he introduced me to his family members as his own son. He was truly my godfather,” the 63-year-old musician recalled.

Sivaprasad visited Madras frequently as he spent hours doing intense sadhana, understanding literature and absorbing bhava in scripts which helped him to attain mastery. After that, there was no looking back. Performing more than 10,000 musical concerts worldwide, Sivaprasad has brought out numerous albums in classical, semi-classical and folklore forms.

Recalling his association with former Prime Minister PV Narasimha Rao, Sivaprasad said, “Besides his inclination towards spirituality, Sanskrit language and literature, PV Narasimha Rao had a penchant for music. Another fact that many outsiders do not know is that PV used to play veena and tabla.

For every Ugadi festival, PV garu used to organise musical concert at his residence in Delhi. I had this opportunity when I was invited to his house and played songs while he played the tabla. Several journalists too had a chance to witness the other side of PV,” Sivaprasad smiles. #KhabarLive