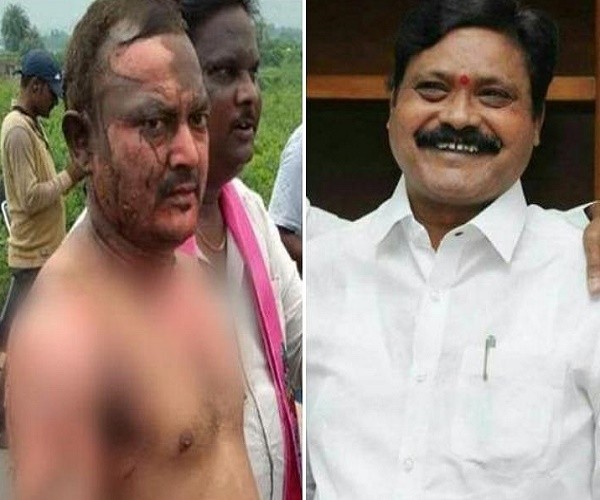 In the heat and dust of Telangana politics, Gattaiah will merely become a statistic, but he is a reminder of the dark underbelly of Indian politics. Regunta Gattaiah died on Wednesday; his fight against his burn injuries lasting exactly a week. The pawn was sacrificed in his king’s bid to win the electoral battle in Telangana.

This took place at a road laying foundation stone ceremony in Indaram village. While the MP was shielded by party workers, the petrol spilled on to a lamp at the venue, triggering a fire. Gattaiah suffered 70% burns and 15 others, including three photojournalists and a policeman, were injured.

Gattaiah’s grouse was that Odelu had been denied the TRS ticket to contest the upcoming Assembly Election and, instead, it was allotted to Suman. The Peddapalli MP, who has been facing resistance to his candidature on the grounds that he is an outsider to Chennur, alleged that it was an attempt on his life by Odelu’s supporter.

Odelu had not helped his cause by locking himself up inside his house two days before this incident, claiming he would come out only if Chief Minister and TRS chief K Chandrasekhar Rao gave him the ticket to contest from Chennur. Giving the TRS chief 24 hours to reverse his decision on Suman, Odelu had also warned of “extreme measures” in case KCR did not change his mind.

So was Gattaiah the “extreme” measure Odelu threatened? Was it a pre-planned move to force KCR’s hand?

“I have given Rs 10 lakh to the family and also promised to get employment for Gattaiah’s wife in a private firm. Beyond this, if I speak anything political, it will become controversial,” says Nallala Odelu, refusing to get drawn into the issue.

So Rs 10 lakh is the price Odelu has fixed for 32-year-old Gattaiah, whose stunt to make it appear that the TRS cadre were upset with KCR’s decision went horribly wrong. Gattaiah has been a long-time Odelu loyalist and locals say the three-time MLA had helped him in the past with his medical treatment as well. It is anyone’s guess if Gattaiah’s decision to pour petrol on himself was his own, borne out of a sense of gratitude or was he nudged into doing so by anyone else.

“It is too early to arrive at a conclusion,” says Venugopal Rao, DCP, Mancherial. “There are claims and counterclaims. Some say he attempted self-immolation. Others say it was an attempt to cause harm. We are examining all evidence, including TV recordings of the event, and collecting oral and technical evidence.”

Despite the tragedy, among Odelu loyalists, there is support for what Gattaiah did. Rajasekhar Gattaiah, a teacher in Indaram, says Gattaiah’s motive was not wrong.

“If our person, as in Nallala Odelu, is given the ticket instead of Balka Suman, it will be better. All of us feel that. Gattaiah wanted to express that opinion,” says Rajasekhar Gattaiah.

ALSO READ:  Why KCR Getting Unsuccessful In National Politics Entry?

Odelu’s rebellion fizzled out when he was summoned by KCR to Hyderabad after his house arrest drama. He is believed to have received a dressing down from KCR who did not appreciate the blackmail tactics. Stepping out of the meeting, Odelu promised to work for Suman in Chennur, discarding his personal ambitions.

“The TRS gave me political life. KCR helped me win three times. So I will work to make KCR Chief Minister once again,” he told #KhabarLive.

“Why did Gattaiah have to sacrifice his life if you were ultimately going to climb down?” I asked.

“Yes, he should not have done so,” says Odelu, being politically correct.

Before jumping into politics, Odelu used to work as a stringer in Adilabad district, contributing to Telugu newspapers. During the Telangana movement, he became close to KCR and got the ticket to contest the 2009 and 2014 elections from Chennur, winning both times. He also resigned and fought a bypoll in 2010.

But the MLA is also a controversial figure. There are allegations of corruption and land grabbing against him. In April this year, an audio clip in which his reported voice was heard abusing a Dalit farmer went viral. Odelu was accused of having grabbed three acres of the farmer’s land. In the same month, his son Kranti was accused of pushing a family into attempting suicide over money matters, before they were saved.

Politically, TRS sources say that KCR’s decision was taken after surveys indicated that Odelu would not do well if he got the ticket. The defeat of the TRS-backed union in the Singareni Colleries elections in October 2017 in Odelu’s backyard is cited as another reason. This when the ruling party had done well in all other mining areas.

The urge to win elections apart, Gattaiah’s death, is a pathetic commentary on the kind of politics being practised. During the Telangana movement, several youth committed suicide or attempted self-immolation. All of them were hailed as martyrs to the Telangana cause, creating a halo around them. With the state getting into election mode, the same Telangana sentiment is being whipped up to garner votes. It in in this atmosphere that people like Gattaiah may look for ways to impress their leaders and, worse, aim for a false sense of immortalisation.

Indian politics thrives on sycophancy. The ‘mai-baap culture’ and the leadership’s absolute power to control lives and careers means there is pressure to walk the extra mile to be in the reckoning.

In the heat and dust of Telangana elections, Gattaiah will soon be forgotten, reduced to a statistic in police data. But he will remain a reminder of the ugly side of politics, where a life after death, is often a stepping stone to greater heights. Except that in this case, the fire Gattaiah lit did not quite light up his master Nallala Odelu’s career. #KhabarLive