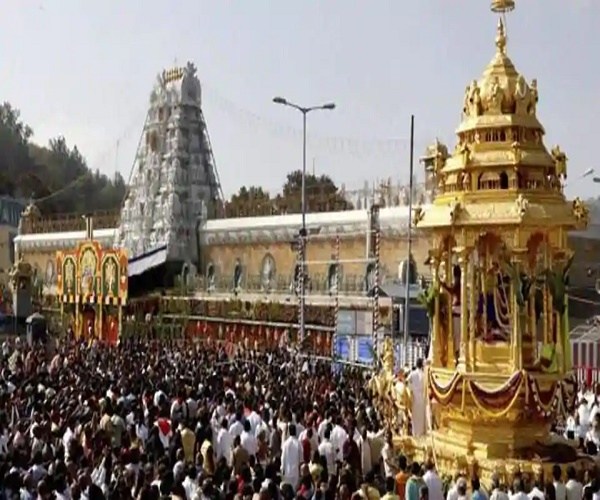 Recently on the Twitter handle of the Andhra Pradesh Chief Minister N Chandrababu Naidu there is a posting with the photo of the Chief Minister with temple priests stating that the abject poverty of the priests is tormenting his heart and it is decided to increase the remuneration of priests from Rs 5,000 to Rs 8,000 and from Rs 10,000 to Rs 12,500.

There are too many contradictions in the last statement of freeing the temples from Endowments Department control but keeping them under the control of the Commissioner of Endowments and of local persons with dharmic mind which essentially means a local politician who by definition will not have a dharmic mindset.

Let us first see what the implications are of what is tweeted. It talks of increasing the remuneration for those above Rs 5,000 whereas the problem is with those whose remuneration is less than Rs 5,000. It talks of the grant of Rs 16 crore from TTD. In fact, five years ago, the TTD made a promise of Rs 100 crores for the Archaka Welfare Fund and released Rs 75 crore in the first three years and has not released the balance Rs 25 crore in the last two years.

The Rs 16 crore is supposed to be part of that Rs 25 crore hence there is nothing extra that is being committed from the TTD side. An increase in remuneration as promised even for those in the category above Rs 5,000 who may number about 1500 require building a corpus of about Rs 100 crore with much bigger contribution from TTD and other bigger temples but nothing is spelt out on that. But, the more important issue is that of small temples where the monthly income of priests is less than Rs 5,000.

These are mostly in rural areas and number around 25,000. To give priests there a decent salary of Rs 10,000 the Endowment Department may have to create a corpus of Rs 6,000 crore which may not be possible or practical. The alternative would be to remove these temples from the control of Endowments Department and allow it to be managed by the local priest with the support of local community.

Temple system as it evolved in India more so in South India has certain unique features. Rulers of the area and in a number of times Muslim rulers as well have endowed the temples with certain lands which are known as the temple inams. The income coming out of these inams is supposed to take care of the expenses of the temple. For those who render services in the temple like the Archakas, Nai Brahmins and the Rajaka separate service inams are provided income from which they are allowed to enjoy.

Whatever is given by the devotees as Dakshina which is also known as plate collection is retained by the Archakas. From time immemorial based on this system temples were functioning as independent autonomous institutions but still dependent on the munificence of the local rulers and the community. Archakatvam was hereditary which ensured an organic relationship developing between the family of the Archakas and that particular temple.

It was this arrangement which was removed through an amendment to the Act in 1987 without thinking of putting in place a substitute mechanism to run the temples. Small temples where there is no income were also brought under the control of the Endowments Department thus putting the burden of the establishment charges on these temple where there is no income worth mentioning further cutting into what little remuneration can go to the priest and dharmic staff.

The problem which needs a solution is with these temples where the income is less than Rs 2 lakh. There is no way the government would be in a place to ensure a decent remuneration of Rs 10,000 to the priests in these small temples unless they are going to create a corpus with budgetary support as done in Telangana constitutionality which is questionable.

The best thing would be to take them out of the control of the Endowments Department and allow them to be managed locally with the help of the local community without putting on their head the burden of a local leader. This, in essence was the main request from the priests of the temples. Addressing the main issue requires an understanding of the problem and commitment to the cause of the Hindu religion and viewing temples as instruments of protecting propagating and preserving the religion.

The Telangana government appointed a Cabinet subcommittee to examine all the issues in depth and based on the recommendations issued the necessary government orders giving the Archakas minimum monthly remuneration of Rs 10,000. For this purpose, corpus was created with budgetary support. #KhabarLive