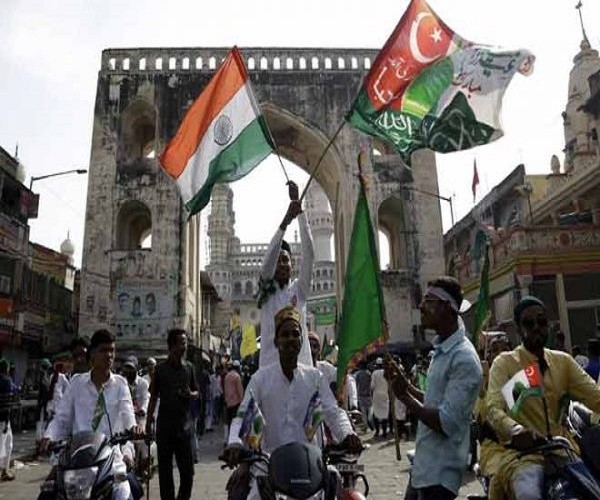 The ruling TRS and the main opposition — Praja Kutami — are both wooing the minorities in the run-up to the elections to Telangana Assembly, while the third player — Bharatiya Janata Party — is seeking to galvanise Hindutva supporters through its blatantly anti-minority propaganda offensive. Incidentally, the major combatants are focusing on Assembly constituencies with sizeable chunks of minority voters.

Minorities account for almost 15 per cent of Telangana’s population. Muslims alone have a 12.7 per cent share of the State’s population. Every 8th voter in the State is a Muslim. Minorities are spread across all the 31 districts of the State with huge concentrations in Hyderabad, Rangareddy, Medchal-Malkajgiri, Vikarabad, Nizamabad, Sangareddy, Adilabad, Nirmal, Karimnagar, Warangal (Urban), Vikarabad, Mahabubnagar, Nalgonda and Khammam districts.

The top seven constituencies that have over 50 per cent Muslim voters are Bahadurpura, Chandrayangutta, Charminar, Yakutpura, Nampally, Karwan and Malakpet. Other constituencies with 20 to 50 per cent Muslim voters include Nizamabad (Urban), Jubilee Hills, Rajendranagar, Zaheerabad (SC), Bodhan, Goshamahal, Mahabubnagar, Khairatabad, Sangareddy and Adilabad. Another 12 segments — Amberpet, Warangal East, Karimnagar, Banswada, Tandur, Musheerabad, Vikarabad, Nirmal, Mudhole, Maheshwaram, Secunderabad and Sanathnagar — have Muslim voters in the range of 15 to 20 per cent.

While AIMIM dominates the electoral scene in the top seven segments, many prominent leaders from TRS, Congress-TDP alliance and BJP are engaged in tough contests in most of the 35 constituencies with Muslim voter base of 10 to 15 per cent. It is obvious that securing a sizeable chunk of Muslim votes is crucial for the main contenders from TRS and Praja Kutami. The BJP hopes to benefit from polarising the majority community on the issue of “minority appeasement” and “unconstitutional reservations” for Muslims.

However, while the two major combatants are wooing the minorities, they seem to be reluctant to field Muslim candidates from constituencies outside Hyderabad. TRS has given party tickets to three candidates, including a sitting member of dissolved Assembly from Bodhan and two nominees from the Old City constituencies. Praja Kutami has nominated eight Muslim candidates (Congress 7 and TDP one), including two from outside Hyderabad (Kamareddy and Nizamabad-Urban) and six from the Old City (AIMIM strongholds).

This raises concerns about the underrepresentation of Muslims in Telangana. As per the current population share, there should be at least 15 Muslims elected to the Assembly. But, the actual number of Muslims elected to the Assembly from Telangana region since 1951 has ranged between 5 and 8. While 8 Muslims each were elected in 1951, 1962 and 2014, the number was 7 each time in 1957, 1967, 1972, 1983, 1985, 1999, 2004 and 2009. Only six Muslims were elected in 1989 and only five each time in 1978 and 1994. Incidentally, the number of Muslim candidates elected to Assembly from main political parties, Congress, TDP and CPI, has dwindled as the AIMIM tally increased from 3 to 7 in the last five decades.

It has led to a situation where only one or two Muslims are elected outside Hyderabad on the banner of other parties and the other winners are from AIMIM in the Old City. Muslims all over Telangana, thus, look towards AIMIM for highlighting their issues in the Assembly.

And, if the Congress-TDP alliance on the one hand and the BJP on the other have launched tirades against AIMIM and its icons and vowed to deal a blow to them in Hyderabad in Assembly polls, the likely impact is obvious. Praja Kutami will reap the anger of the minorities for targeting AIMIM in the rest of Telangana. TRS will apparently be the main beneficiary of Muslim votes outside AIMIM strongholds. #KhabarLive