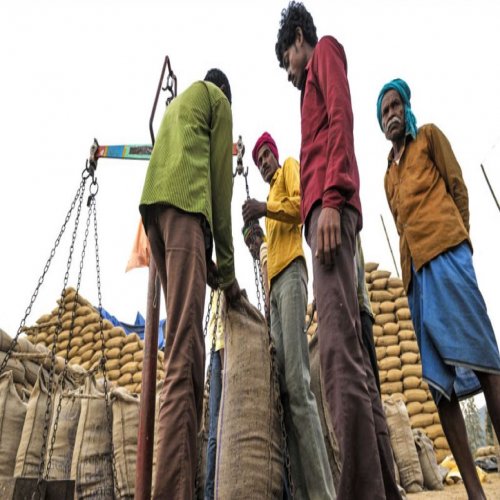 The state of Telangana is poised to record its highest production of food grains at 1.3 crore metric tonnes— a rise of 42 percent over the previous years. The chief minister is one of the happiest person to see his dream of ‘Golden Telangana’ comes true. But the crop procurement by the state government gone delayed and farmers becomes red with this attitude.

A few days ago, Telangana Chief Minister K Chandrasekhar Rao said that the government would have broken into celebrations over the state witnessing a bumper crop during the rabi season, but for the threat of the COVID-19 pandemic.

KCR, as the Chief Minister has come to be widely known, is the happiest man— to see his dream of turning vast swathes of arid lands into lush-green farm fields come true with the realisation of major irrigation schemes in the last six years since he took over the reins of the country’s youngest state in 2014.

Telangana’s economy is mainly supported by agriculture. The prospects of irrigation are dependent on two major rivers— the Godavari and the Krishna —with 79 and 60 percent of the catchments, respectively. But most of the land remained arid, which prompted KCR to harness the river waters by realising the Kaleshwaram Lift Irrigation Scheme (KLIS), the Palamuru Rangareddy Lift Irrigation (PRRLI) project, and the Devadula and Sitarama Lift Irrigation projects.

KCR’s TRS government, which came to power after the state’s creation, was left with no option but to fully utilise the river waters to end the distress conditions in the farming sector. Telangana continued to witness a spate of farmer suicides even after it became a new state, forcing the KCR government to introduce the Rythu Bandhu Scheme, under which every farmer will receive assistance of Rs 8,000 per acre.

In 2014, when Telangana, with its scanty irrigation facilities, was carved out from Andhra Pradesh, it had a net irrigated area of 62.46 lakh acres, mostly rain-fed. By 2019-20, the area increased phenomenally to 97.94 lakh acres.

Paddy cultivation in the current rabi season hit a new high at 27.98 lakh acres over 15.41 lakh acres during last year’s season. The state is poised to record its highest production of food grains at 1.3 crore metric tonnes— a rise of 42 percent over the previous years.

This success on the agriculture front is largely attributed to KCR’s vision to harness the Godavari and the Krishna river waters for irrigation. He has been the architect of the Mission Kakatiya, which aims to revive over 46,000 defunct tanks. Chandrasekhar Rao led the statehood movement with water as a catchword.

KTR’s Siricilla hotbed of protests
But scenes of peasant protests in Siricilla, represented by KCR’s son and IT and Urban Development Minister KT Rama Rao, apparently runs counter to this feel good factor.

The Chief Minister, in his daily media briefings, kept reassuring farmers that his government would procure every grain without hassle and a sum of Rs 35,000 crore was set aside exclusively for this purpose. In the last week of April, however, farmers in parts of Siricilla area set their paddy stocks on fire with petrol at procurement centres in protest against the ‘injustice meted out to them in procuring their produce’. Farmers in Pegadapalli, Jagtial district staged a protest with bottles of pesticide, threatening to kill themselves, if the government failed to address problems in the procurement process.

The government promised to procure the produce with a minimum support price (MSP) guarantee at Rs 1,835 per quintal. The procurement is done through IKP (Indira Kranti Patham) volunteers from the procurement centres. It is complained that the millers have been refusing to accept the grains containing chaff and moisture, supplied by IKP volunteers for custom milling.

The millers also allegedly insist upon deducting 5-10 kg of grains with moisture and chaff beyond ‘permissible’ levels from every quintal. The cuts will lead to a drastic fall in the MSP, which ranges up to Rs 200 per quintal, according to Sarampalli Malla Reddy, president of the Telangana Rythu Sangham.

A daunting task for the govt?
The protesting farmers hailed from Karimnagar, Rajanna-Siricilla and Jagtial districts, which fall under the ayacut of Sri Ram Sagar Project (SRSP). About 9.5 lakh acres is irrigated through the SRSP. Distress conditions have been prevailing all over the state, with the government failing to procure not even 26 lakh tonnes, says Malla Reddy.

When the state is getting ready to produce more than 1 crore tonnes of food grains in the current season, it is unlikely that the government could procure the rest of the produce from growers, Reddy alleges, citing inordinate delay in the procurement process. The government has not even built cement platforms for drying the produce or kept gunny bags in sufficient numbers, he says.

Past experience in the Krishna and the Godavari delta basins in Andhra Pradesh revealed that land-owning farmers left their farm lands to tenant farmers and diversified into alternative economic activities with the surplus money they gained from the irrigation dams, he points out. The KCR government has been allocating Rs 12,000 crore annually under the Rythu Bandhu Scheme to help the land-owning farmers and failed to come to the aid of landless tenant farmers, Kondal Reddy laments. #KhabarLive