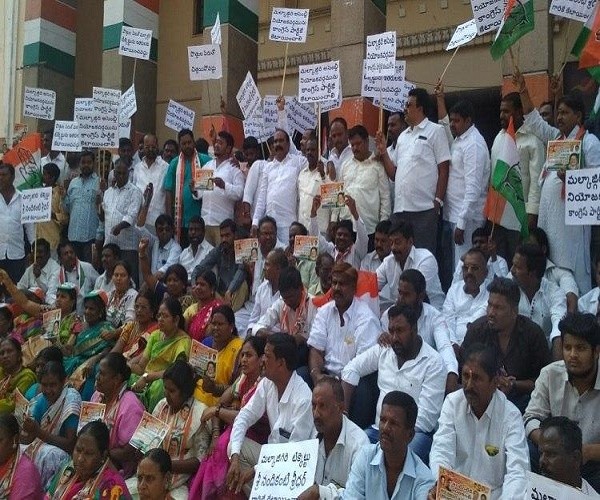 Dissent is brewing within the Telangana unit of the Congress. This, as a section of student leaders from Osmania University, who were the backbone of the agitation for a separate state, are being left out of the final list being prepared by the Telangana Pradesh Congress Committee (TPCC), due to be released on November 10.

The Congress war room in New Delhi’s Akbar Road is witnessing hectic activity as the party gets ready to release its list of candidates who will contest in the upcoming Telangana elections scheduled on December 7.

For the past few days, aspirants have lined up after being summoned by the screening committee, which includes TPCC president N Uttam Kumar Reddy and AICC state in-charge RC Khuntia, who have been participating in day-long consultations to hammer out their final list of candidates.

Injustice to student leaders
The Secunderabad Cantonment constituency in the heart of the state’s capital is witnessing a unique battle as the dispute within the party has also extended to family. Krishank Manne, a prominent leader of the Osmania University Joint Action Committee (OUJAC) who worked his way to the ranks of TPCC spokesperson after joining the Congress when Telangana was formed, is the main dissident. He is facing off against ex-Union Minister Sarvey Satyanarayana, his own father-in-law.

A senior leader in the Congress, Sarvey Sathyanarayana had bagged the Malkajgiri MP seat in 2009 but has faced two continuous defeats since – once in the 2014 Lok Sabha Elections and again in the Warangal Assembly bye-election held in 2015.

Supporters of Krishank, who was also denied a ticket in 2014, accuse Sathyanarayana of stonewalling the student leader’s attempts to get the candidacy.

“There are more than a dozen people in Congress who dream of being Chief Minister in Telangana. Everyone knows that. Sarvey Sathyanarayana is the latest addition to the list,” a Congress leader remarks on the condition of anonymity.

Both leaders were summoned to the war room earlier this week, but Sathyanarayana allegedly never turned up, despite several senior leaders asking him to forgo the seat, promising an MP seat in return. Despite Sathyanarayana’s no-show, Krishank believes his father-in-law may still get the Congress ticket as he is close to the party High Command.

Speaking to #KhabarLive, Krishank says, “OU student leaders are being denied tickets despite the promise made by Rahul Gandhi at his residence in New Delhi and Hyderabad too. It is painful and many of us are upset. If I’m denied a ticket again, what is the guarantee that I’ll get one in 2024? I’m also answerable to the voters with whom I’ve been spending time for all these years.”

“I will contest as an independent candidate if Congress doesn’t change its stand and does not accommodate OU student leaders, as was promised,” he added.

A second major battle is shaking up the Congress in Jangaon, where Bala Lakshmi, a firebrand OUJAC leader, who was one of the few women leaders to emerge from the movement, is upset after the constituency was reportedly allotted to the Telangana Jana Samithi (TJS) as part of the Mahakutami or grand alliance being forged in the state.

Others who are part of the alliance include the Telugu Desam Party (TDP) and Communist Party of India (CPI).

Speculation is strong that the TJS would field its party president and another key figure from the movement, Professor Kodandram himself, from the seat.

Bala Lakshmi’s followers argue that if the alliance wanted to go for someone who was prominent in the movement, then she would qualify as well.

“I was from OU and fought during the movement. We even fought for a separate Jangaon district. I’m well qualified for the ticket and we have a strong cadre in the constituency as well. The party talks about bringing in more young candidates, especially women. I tick all the boxes that Rahul Gandhi talks about,” Lakshmi tells #KhabarLive.

Local party workers sympathetic to Lakshmi’s cause also allege that attempts were being made to finalise Kodandaram from the seat, in an attempt to create a divide between two leaders of the movement, as Lakshmi’s contender within the Congress is Ponnala Lakshmaiah.

While Lakshmaiah is an ex-state minister, he suffered a big blow in 2014, losing the Jangaon seat although he was the then TPCC chief. Sensing trouble, senior leaders like Koppula Raju have also taken note and are working to douse the flames.

“I’m also a leader of the movement. I worked on the ground and Kodandaram may have been the brains, but he could have been fielded anywhere,” Lakshmi argues. Having been denied a ticket in 2014, Lakshmi warns that she is also willing to contest as an independent candidate if the need arises.

ALSO READ:  Digital Payment System Is Boon Or Bane In This Pandemic?

“It is complete injustice. An attempt is being made as part of a political ploy, where the powerful political leaders from OU are being suppressed, so that they don’t have a voice to question things in the very Telangana that they fought for,” she says.

Critics point out that the TRS has done a far better job while offering seats of power to student leaders who were part of the movement. While Balka Suman has already almost completed a term as an MP, he has been nominated as the TRS’ MLA candidate for Chennur, replacing a 3-time sitting legislator. Even those leaders who lost were given posts in corporations and other organisations.

“It is difficult because leaders get politically shaken. We work for five years on the ground, interacting with people and when we don’t receive a ticket, we are almost lost about our future plan. There is no guarantee that we will get one in the next five years either,” a student leader from the Congress who was associated with the movement states.

Congress takes stock
Durgam Bhaskar, another prominent leader and an aspirant for the Bellampalli (SC) seat, was the latest leader to be summoned to the war room on Friday afternoon. However, it is being widely speculated that the constituency may be one out of the three seats being offered to the CPI in the alliance.

“KCR or Kodandaram didn’t fight the movement alone. We were the backbone of the movement. We were the ones who worked without food or sleep, mobilising people around the clock. We are assuring party leaders that if they give us a seat, we will ensure that we emerge victorious,” Bhaskar says.

Congress leaders have taken stock of the situation and are reiterating to student leaders that the seats have not been finalised yet, even asking some not to approach the media.

“We have taken note of the dissent. Their complaints are understandable and deliberations are ongoing. We have asked them to repose their faith in the party,” a senior Congress leader in the know, said.

“We are still hopeful and we are hoping that the Congress stands by Rahul Gandhi’s promise of granting tickets to student leaders from the Telangana agitation,” Bhaskar adds.

Trouble was brewing since last week, when reports began doing the rounds that the ‘Mahakutami’, or the grand alliance, would allot the Malkajgiri seat to the Telangana Jana Samithi (TJS), much to the disappointment of Sridhar and his followers.

Protesters outside the Gandhi Bhavan said that they had begun canvassing for Sridhar many days ago and had even done massive work on the ground for the last four years. Sridhar was the Congress’ candidate in the 2014 elections but lost to Kanaka Reddy of the TRS.

“After the bifurcation, the party was decimated at the ground level. Sridhar worked really hard to bring the party back to life in the constituency. Now, each meeting of Sridhar draws crowds over 5,000 people,” one party worker at the spot said.

The dissenting workers also claimed that they were not even aware of the TJS candidate from the constituency, adding that no one had even heard of him.

Meanwhile, a Congress spokesperson said, “We will sit down and talk with party workers. We understand their concerns but there is not much that can be done.”

Malkajgiri, with 3,79,894 voters, is an important constituency, as it borders the Secunderabad Cantonment area.

The Mahakutami consists of the Congress, TJS, the Telugu Desam Party (TDP) and the Communist Party of India (CPI) and reached a consensus on seat sharing on Thursday night. The Congress is expected to contest 93 seats, leaving 14 seats to the TDP, eight seats to the TJS and three seats to CPI.

Telangana is headed to the polls after caretaker Chief Minister K Chandrasekhar Rao dissolved the Legislative Assembly on September 6. The Election Commission has said that the last date for filing nominations is November 19. Voting will take place on December 7 and the results will be announced on December 11. The Model Code of Conduct (MCC) is also already in place in the state. #KhabarLive