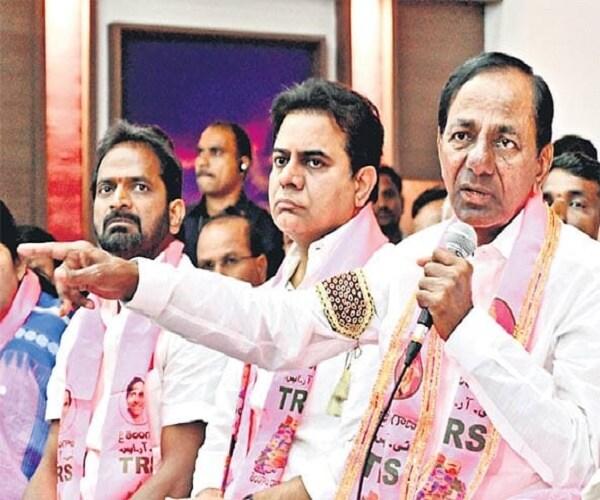 Breaking his silence on the CAA-NRC-NPR, Telangana Chief Minister K Chandrashekhar Rao (KCR) recently lambasted the Central government at a press conference. That too, by reminding the people of the State that his party, the Telangana Rashtra Samiti (TRS), voted against the legislation in a “kunda badhalu kotte” way. For those unfamiliar with the Telangana Telugu expression, it denotes the sound made by a pot that breaks when it is thrown on the ground intentionally — signifying that he means business.

Ever since the movement for separate Telangana gathered steam, Rao’s political rhetoric has been rife with such talk. His speeches show little signs of slowing down. It again made its presence felt in a press conference when the Chief Minister announced his triumph in the Hyderabad Municipal elections.

Beyond Roots
However, such colloquially ornate speech has not only been about sticking to his roots. It started out as a direct assault on the linguistic superiority of Andhra politicians and people who maintained cultural hegemony over the undivided State. To them, their Andhra Telugu was proper and sacrosanct.

Rao’s press conference denouncing the CAA-NRC last month was devoid of such purity. To some, influences from other languages — which Telanganites imbibe in their everyday lingo — are akin to pollution rather than enrichment.

The Chief Minister emphasised that the TRS never takes a stand on any issue as a “tamasha” or in an “asha mashi” way — the former meaning performatory and the latter wishy-washy. He asserted that the CAA-NPR-NRC are “vandaku vanda shatam” (100% wrong). Taking a jibe at the Congress, he exclaimed, “paapam.” The pitiful Congress party has been asking for his stand repeatedly on the CAA-NPR-NRC in a desperate bid to steal some Muslim votes in the State despite the TRS voting against the CAB (Citizenship Amendment Bill) in Parliament.

He was referring to the party’s Lok Sabha member Nama Nageshwar Rao’s address in which he stated that the Bill “is not desirable for a multi-cultural, multi-lingual, pluralistic society and the largest democracy of the world.” Rao also pointed out the irony of the Bill in that it goes “against the core values of the Constitution.”

He said that his party engages not only on the State-level issues but also on national-level ones. One such example was the water scarcity issue in Tamil Nadu where he said the people there were “tarsaayinchutunru” (yearning for their share of water). The origin of this Telangana colloquial term obviously comes from the Urdu word “taras”.

Sprinkle of Urdu
Telangana parlance is to Andhra Telugu as ‘Dakhani’ is to chaste Lucknow/Delhi Urdu. Both Telangana and ‘Dakhani’ dialects defy their “parent” languages, which are the so-called pure versions.

Moreover, Telangana Telugu is sprinkled with Urdu words due to the State’s past under the Qutb Shahi (1512-1689) and Asaf Jahi (1724-1948) rule. Both regimes patronised Urdu and Persian to varying extents throughout their reigns. Likewise, Telugu, Marathi and Kannada words only amplify the charm of ‘Dakhani’. To some, the hodgepodge of external influences amounts to linguistic pollution rather than enrichment. Not for the Telangana Chief Minister though.

Telangana Telugu is a cut and dry engagement devoid of embellishments where sarcasm is used often, especially when pointing out the hypocrisy as in the case of the “self-contradictory statements” of BJP ministers regarding the NRC (National Register of Citizens). Rao read out a few lines from a handout from the Ministry of Home Affairs presented in the Lok Sabha during an NRC-related discussion that read “NPR is the first step towards a nationwide NRC.”

This highlighted glaring contradictions in the public statements made by Home Ministry stalwarts. The Union Home Minister claimed that the NPR (National Population Register) has nothing to do with the NRC. Rao was then quick to bring up the Minister of State for Home Affairs Kishan Reddy’s recent words that the NPR is voluntary-disclosure based with no compulsion. Keeping this in mind, he asked the Central government to make up its minds, whether this is voluntary or compulsory.

Decentralising Politics
Hinting at a public meeting with a conclave of like-minded anti-CAA-NRC Chief Ministers across the country, Rao said he had been in talks with 15-16 such Chief Ministers and shared his conversation with his counterpart from Rajasthan, Congress’ Ashok Gehlot. When Gehlot suggested they coalesce in Delhi, Rao preferred that they converge outside of Delhi and in Telangana. What better way to let the people know that he is imploring politicians to steer clear of tired and tested methods by using the colloquial term “poddundaaka”. In this context, this word means to decentralise political organisations and initiatives away from the national capital.

Rao reiterated in the speech all through that his party will remain secular no matter what. Whether his party survives or not, they will not resort to “Yellaiah itla cheppindu, mallaiah atla cheppindu” symptoms wherein they may give into hearsay and change their stand.

In no uncertain terms, Rao said that the Supreme Court has to take suo moto cognisance of the public unrest across the nation and strike off these Bills without much ado. The Chief Minister’s consistency with the slang-ridden reassurances against the CAA-NRC is endearing.

However, Telanganites were waiting to see him act upon such promises, that too in the ‘kunda badhalu kotte’ fashion given the Telangana police’s high-handedness inflicted upon those who also dissent against the legislation he so opposes. The Cabinet meeting on the matter chaired by Rao on February 16 favoured a resolution to be passed during the upcoming Budget session against the CAA calling it discriminatory on the basis of religion and “thereby jeopardises secularism as envisaged in the Constitution.”

But whether the slick Chief Minister will also direct his native verbiage against the NPR process that lays the groundwork for the NRC remains to be seen. #KhabarLive