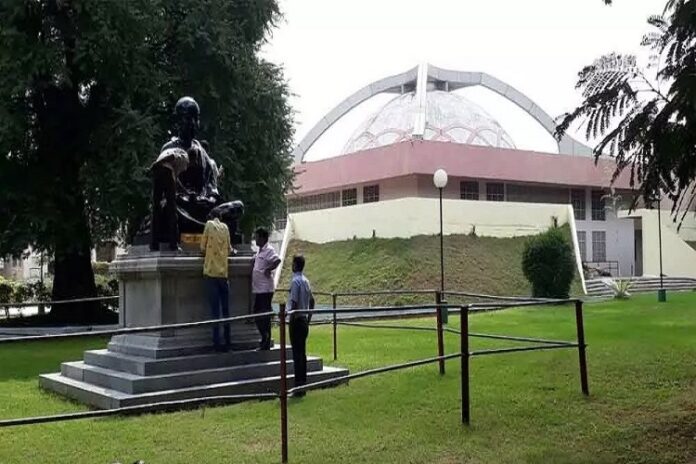 Many flayed the double standard policies of Telangana government to develop Bapu Ghat on the lines of Sabarmati Ashram have remained on paper for the last six years. And on the Gandhi Jayanti day, looks deserted.

Hyderabad has a special connection with the memory of the Father of the Nation Mahatma Gandhi as this historic city was one of the few places where his ashes were immersed.

The ashes were immersed at the confluence of Musi and Esi rivers, which have now dried up. Tucked away in Langer Houz in the western part of the city, Bapu Ghat, however, comes alive every year only on the birth and death anniversaries of Mahatma Gandhi.

The visit by the Governor and Chief Minister to pay homage brings the memorial into focus but the rest of the year it remains mostly deserted.

The plans of the Telangana government to develop Bapu Ghat on the lines of Sabarmati Ashram in Ahmedabad have remained on paper for the last six years.

Earlier, there were efforts to ensure some activity at the place, which boasts of a memorial building, Gandhi’s statue in a meditation position, a prayer hall, an interactive museum called Peace Truth Ahimsa museum and a 76-feet long collage wall featuring more than 400 pictures of Gandhi.

Also on display at Bapu Ghat is a Harley Davidson motorbike. Named Ahimsa Harley, it has signatures of 900 students from 26 countries as a symbol to announce that Gandhi has arrived in the 21st century.

It was in 2012 that Mahatma Gandhi Digital Museums (MGDS) set up a digital museum at Bapu Ghat in an effort to convey Gandhi’s message through the language of technology.

However, the place continues to remain out of bounds for visitors. Employees say it is opened only for school students who are brought with prior permission from authorities.

Mahatma Gandhi’s great-grandson Tushar Arun Gandhi, during his visit to the memorial last year, was all praise for use of modern technology to depict the life of the Mahatma. He described the collection of photographs as nice but said they were meaningless as they were neither arranged in chronological order nor tell the story.

“For me these photographs are important because I can identify the occasions that they portray. Those who come with no knowledge can’t identify people except Bapu. I would call it a waste. It’s beautifully done but there is no theme. No message is going out from this,” he had told #KhabarLive.

According to him, the photographs do not tell the story of life, the story of those times and the history of the Independence movement. “It looks as if they had a wall and they covered it with photographs. The effort is praiseworthy but it could have achieved much more,” he said.

Mahatma Gandhi had visited Hyderabad on a couple of occasions. Historians recalled that he visited Vivek Vardhini College in Hyderabad on April 7, 1929 to attend a meeting on the rights of Harijans.

He had collected donations from well-wishers for the freedom struggle and during his speech praised the communal harmony under the rule of Nizam in the then princely State of Hyderabad.

It was in 1942 that Gandhi was arrested by the British from Lakshmi Ramalingam Mudaliar Government High School in Bolarum. However, the auditorium from where he was taken into custody was demolished as it was in a dilapidated condition. #Khabarlive #hydnews