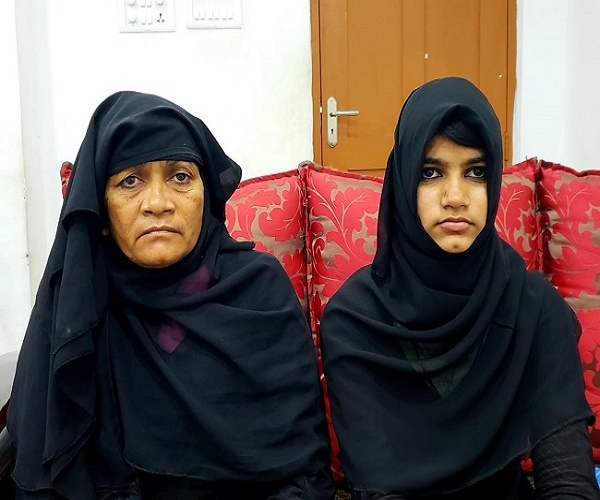 It was in October last year that Nasreen Fatima met Ahmadi Begum in Hyderabad’s Shaheen Nagar area. Ahmadi Begum’s daughter used to stay close to Nasreen’s house in the old city area and she put the duo in touch.

Within a month, Nasreen was on a flight to Saudi Arabia along with her daughter, Badar Fatima. Ahmadi was an agent, like many others in the old city area, who scout for vulnerable women and are involved in trafficking them to the Middle East, on the promise of making them a quick buck.

“Ahmadi convinced my mother that there was easy money in Saudi, doing the work of a house help. She promised us that both of us would work in the same household and would be paid a salary of 1,000 Saudi Riyal each, besides being allowed to go for the Umrah pilgrimages,” Badar told #KhabarLive.

Convinced that a better future lay ahead, Nasreen handed over her passports to Ahmadi. “They got us a visa in a matter of days and booked us flight tickets. The agent said that there was no turning back and before we could even process it, we had landed in Saudi,” Badar adds.

However, what followed was a month of alleged torture as the duo were separated and made to work in different households for long hours, while being physically abused. Badar also alleges that she was sexually assaulted.

Badar informed her family about her ordeal and with the help of Embassy officials, managed to return to Hyderabad on December 5. On December 16, she approached the Hussaini Alam Police Station and gave a written complaint against Ahmadi Begum. On January 9, Nasreen Fatima also returned home with the help of authorities.

However, they say that their troubles are far from over.

“Since we reached Hyderabad, Ahmadi Begum and her son-in-law are threatening us of dire consequences and asking us to withdraw our complaint. We fear for our lives as Ahmadi Begum is running a big racket with goons who help her in human trafficking, especially sending women from Telangana and Andhra Pradesh to Gulf countries illegally and cheating them. Kindly take necessary action against them for cheating me and my mother,” the complaint states.

“They constantly call us and abuse us. They threaten to put a case against us, claiming that we stole something from them. The agent also knows many rowdy-sheeters and says that they will even murder us in our own homes. They even know where we live,” Badar tells #KhabarLive.

The present case however, is only one out of hundreds of such incidents that come to light in police stations across Hyderabad every year.

It was exactly one year ago, that then Home Minister Nayini Narasimha Reddy and NRI Affairs Minister KT Rama Rao held a coordination meeting and promised to crack the whip on agents, stating that they would be arrested under the Preventive Detention (PD) Act. Stating that special teams would be formed, the Ministers also said that it was mandatory for travel agents to register themselves with the government.

There were two main issues. One was the ‘khadama’ visa (a visa for domestic help), where agents lure vulnerable women with the promise of easy money, before trafficking them off to households in the Middle East, where they are physically and sexually exploited. The second was a ‘child bride’ racket, where minors were sold off to rich sheikhs and other foreign nationals. The well-organised racket involves ‘agents’ in Hyderabad and Gulf countries, who promise to pull poor families out of poverty, if they ‘married’ off their daughters.

However, one year on, not much has changed on the ground.

“If you file a complaint with the Central ministry or an embassy about a woman being trafficked, they are asking for a copy of an FIR. However, it takes months of pursuing the case for the police to even register an FIR. Many times, the victims have to approach the Commissioner or a senior police officer, before an FIR is registered on their complaint. Even then, since the families are poor, the local police try to ‘settle’ the matter by asking the agent to pay an amount. Since the families are in dire straits, they also take up the offer,” he adds.

Activists working on the ground say that a case is generally registered under Section 420 (Cheating) of the IPC and the agents are let off on bail very easily, following which they resume their activities after walking out.

Activist Jameela Nishat, who has been working on the ground and exposing the ‘child bride’ racket for close to two decades now, through the Shaheen Women’s Resource and Welfare Association, tells #KhabarLive, “They are arrested for a few times and easily let off on bail because there is no strong law that allows us to hold them for a longer time. Also, sheiks are rich and have a lot of resources.

They have no problem fighting cases in court. For example, one of the women we rescued, has been fighting for justice for three years, but to no avail. She did receive compensation from the state government but the sheikh and the agent, who is the mediator, are still walking free.”

“The solution to this should be more checks and balances at the Embassy level, when they are issuing the visa. Also, many times, the agents also have their own people at the airport. It is a massive nexus. We are not just dealing with an individual agent, but with a parallel system,” Jameela adds.

Meanwhile, Amjed points out that several meetings were held over the past few years and despite intervention by KTR, Union Minister Sushma Swaraj and the Telangana DGP, agents continue to thrive in the by-lanes of Hyderabad’s old city area.

“On the ground, nothing has changed and no work has happened. The ‘khadama’ visas are still being issued and minors are still being married off to rich sheikhs. The police is obviously well informed but in some cases, are also part of the nexus,” Amjed says, pointing to a recent case, where a home guard from the city was allegedly involved as an agent, in the trafficking of a woman.

“They are a big menace. Like the police are geo-tagging rowdy sheeters and anti-social elements, why are they not geo-tagging these agents and booking them under the PD Act?” Amjed asks.

Alleging inaction by the Hyderabad police, Amjed adds, “Another tactic by the police, is that they claim that the agent is absconding for months together, even though victims submit the phone number and address of the mediator in their complaint. Authorities are not reading the writing on the wall. Hyderabad will become famous only for such agents and cheating cases. There needs to be more will from the police to address this issue.”

However, the police say that there is only so much they can do, as they also deal with outdated laws.

However, he also admits that unless an agent is booked under the PD Act, they manage to secure bail.

“What generally happens is that officers make recommendations for more stringent laws when a review meeting takes place with the DGP, who in turn, forwards the proposals to the Law Commission,” a senior police officer tells #KhabarLive on the condition of anonymity.

“For example, Section 510 of the IPC which deals with ‘misconduct in public by a drunken person’. Even today, the fine is Rs 10. So, we take that person, get a blood test done in a government hospital, then send a sample to the forensic lab, which will then submit a report in two months.

Then we have to file a charge sheet. After all that, the person pays a fine of Rs 10 and walks out. So the onus is on the Law Commission to update laws according to the present day scenario,” he adds.#KhabarLive