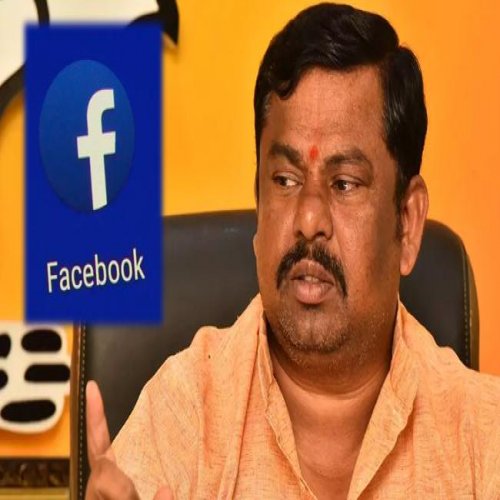 The most controversial yet popular, detested yet followed – BJP’s lone MLA from Telangana has a solid huge fan base of his own. Hyderabad’s Goshamahal assembly constituency MLA Raja Singh’s alleged hate speech was central to the recent Wall Street Journal article that sparked a big debate on Facebook’s alleged pro-BJP bias forcing it to belatedly ban Singh.

However, it hardly has affected his fans that continues to run fan pages on Facebook, some of which are very active and have lakhs of followers.

For instance, “Tiger Raja Singh Fan Club” is one of the most active and followed pages that idolises Singh, someone the opposition calls a “hate monger” and Facebook has banned. It has a whopping 211,164 followers and 180,880 likes. This Facebook page cover’s photo screams, ‘I am not secular, I am Hindu’. It has also been sharing articles about the recent controversy about the social media giant banning him where the comment section has been dominated by assertions that make him look like someone who has been wronged for raising his “voice”.

The same page recently posted a screenshot of Singh’s tweet demanding to know from Facebook authorities the reason for his removal. The page administrators posted it with a comment “By banning him they have taken his pro-Hindu work across India. Lakhs of ppl are his fans already. Now millions more will join. Raja Singh Bhai aap aage badho.”

Meanwhile, there is “We Support Raja Bhai” with 10,940 followers. This page primarily showcases Singh’s video statements, for instance on Citizenship Amendment Act or Ram Navami parade being cancelled to the pandemic. But, the page also gives platform to video of RSS training or the video of the Palghar lynching of saints – things that set the larger Hindu nationalist narrative. The ‘about’ section of the page reads, “Bharat Mata Ki Jai! Can’t stop worshipping India due to the noise made by anyone. As long as there is a stir in the blood, saffron cannot bow down !! Jai Shree Ram.”

Similarly, there is another Facebook page by the name of “T.Raja Singh Yuva Sena” which has 9,440 followers. Though this page, which was created in 2015, has not been very active, it is riddled with propaganda material which shows him as a politician who espouses the ‘Hindu cause’ with photos of him standing next to Shivaji.

Then there are pages like “I like Raja Singh” with 7,034 followers. The latest post is about the BJP MLA meeting Telangana Home Minister Md Mahmood Ali where he asked, “From which terror organisation I have threat”. This after he was asked to travel in bullet proof cars only following his rising threat perception. In another post, it flaunts a news article talking about the threat perception, where he is referred to as “Hindu Hriday Samrat”.

Notwithstanding the grave allegations of hate speech against Singh, who in a string of controversial statements said that he will “behead” those opposing Ram temple at Ayodhya. In 2017, he was quoted to have said, “To those who warn of dire consequences if Ram Mandir is built. We were waiting for you to say this so we can behead you.” The same year, in a video released, Singh had asked West Bengal to repeat the 2002 riots in Gujarat, in the state.

A Facebook spokesperson said, “We have banned Raja Singh from Facebook for violating our policy prohibiting those that promote or engage in violence and hate from having a presence on our platform.”

ALSO READ:  For Families In Kidnapping Cases, Closure Is Often Difficult To Find

However that doesn’t dissuade his fan base. On the contrary, that’s what makes him “popular” in the virtual world. Not just Facebook pages with lakhs of followers but many individuals too started fan pages for Singh with a limited number of followers. One of them is “I Support T. Raja Singh” with just 2,617 followers or “Raja Singh Team Jai Sri Ram” with a humble 3,940 followers.

And there are plenty like these. However, there is an overarching trend – Singh is pictured next to either Shivaji, Lord Ram or Ganesha statues too ooze that Hindu nationalist sentiment. Regardless of what Facebook has to say about him, his fans view him as a “fighter”, “saviour” who does not care about being banned from one social media platform.

Singh did not respond to calls or text messages seeking his view on this, till the time this article was written.

There is no data to suggest whether there has been any surge or dip in Singh’s approval ratings after the social media giant took the big decision. However, he continues to be a ‘Hindutva icon’ fighting for a ’cause’, for his cult fan base, on Facebook. #KhabarLive #hydnews