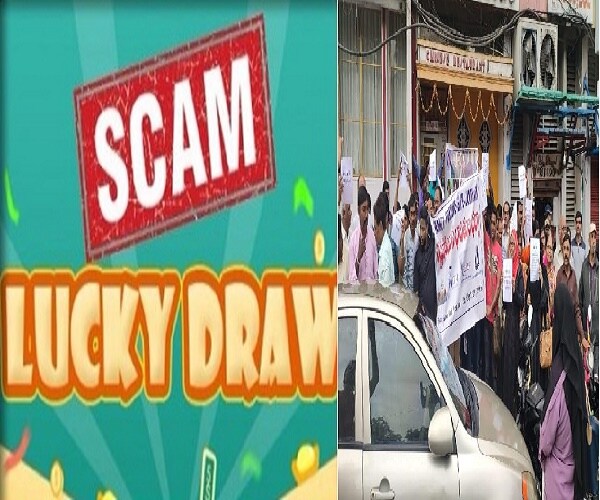 Suddenly, when your name appears in a lucky draw and you won an attractive holiday package makes you happiest person on earth. Later, the lucky draw will dupe you with your hard earned money, it makes you in tears.

When Hafeez, a Hyderabad resident got a call in 2017 saying he had won gifts from a lucky draw by “Free Gift Holiday Package”, little did he know that he would lose Rs 2 lakh from his meagre savings and come in possession of fake land registration. An estimated 2,000 people from Hyderabad are believed to be victims of this ongoing scam that the Hyderabad police, have been unable to take action against despite numerous FIRs.

Most of the victims #KhabarLive spoke to say they have shelled out a minimum of Rs 1 lakh and others say they invested up to Rs 9 lakhs. An exact estimate of the scam is still unknown and the Hyderabad police investigating the case has made little progress to bring the perpetrators to justice, say the victims who insist that the scam is still being run across several cities in India.

In 2018, several victims of the scam began filing cases against the managing director of a fake club called the Fortune Group of Estates and services, run by a man named Shaik Khadar Basha and his associate Panganti Vijay Kumar. Six cases were filed at various police stations against the firm, and the police arrested the two accused in June 2018. Though the police seized the company register books, the duo was let off as no charge sheet was filed.

Two months after the arrest, in August 2018, IE Malleshwari and her husband Ramulu paid Rs 1 lakh to LandMark Infra services under the Future Group for a travel package, which included an open plot. “No land or any services were given by them, when we asked about the plot registration, they said the process was on, it has been over a year and now their office at Banjara hills is closed and all the numbers given by them have gone defunct,” says Ramulu.

ALSO READ:  No Private Buses Allowed Beyond ORR In Hyderabad, How Will Commuters Ply?

Hafeez says he was also conned in a similar manner, “We had come out after shopping at a mall when a person asked us to take part in a lucky draw. We wrote our details on the raffle tickets and got a call three days later saying we had won a gift,” says Hafeez, who works as an interior decoration artisan. The caller asked Hafez and his family to visit a hotel at Somajigudda to collect their gift, “They insisted that I bring my wife along,” he added.

Once the couple reached the venue they were informed that they would have to sit through a “Promotion Pitch” before availing the gift, “But it was a sales pitch, they wanted us to buy lifetime Holiday Packages worth a few lakhs, saying once we pay we could book rooms at hotels across India. I was not interested but my wife was led to believe that this was a good offer, we paid them Rs 50,000 that day,” says Hafeez, who eventually shelled out a total of Rs 2 lakhs.

“They came to my residence with a PoS (point of sale) machine for the money. I ended up trusting them as they seemed very professional, they even had a customer care service and two offices in Hyderabad. It seemed very genuine,” he added.

It was only when Hafeez wanted to make a trip to Kerala and tried booking a hotel room through the service that he realised he had been conned. Little did he know that he would be taken for a ride again.

“They made it clear that there would be no refund, instead offered to register land for the same amount in my name,” says the victim who was taken to a vacant plot at Yadagirigutta, outside Hyderabad limits, “They showed me 30 acres of land claiming it to be theirs. We did the registration for land worth the money I paid them, but it turned out the land was not theirs. The whole registration was fake,” Hafeez adds.

Shahbaz Ali Khan, an anti-corruption activist says that that despite the arrest in June, more people were allegedly conned, one even in July 2019. In October this year, 60 of the scam’s victims protested before the Panjagutta police station when many new victims of the scam were allegedly prevented from filing fresh FIRs.

“About 300 of these victims reached out to me by September,” says Shahbaz, who has been helping victims of other ponzi scams including Heera group and the IMA scams get legal aid. “The police were initially hesitant to accept new complaints, but registered new FIRs after the Hyderabad Police Commissioner intervened,” he added.

The activist pieced together the names of various companies the scam operated under. Shabaz alleges that Elite Group of Loyalty Services, Fortune Group of Estates & Services, Priority Services and Landmark Infra Services are all run by the same group of people, who are allegedly operating under different companies.

The investors have named as many as 23 people in their police complaints. #KhabarLive reached out all 23 people mentioned in the scam. While most of those accused were unresponsive, the few who answered said they were just staff and were not authorised to speak to the media. The managing director of the firm was also unresponsive, the victims of the scam allege that they are all presently absconding.

“When we tell the police to register an FIR, they ask what is the point. They say we will never get our money back,” another victim of the scam, who lost Rs 5 lakhs told #KhabarLive, Shabaz says often when the number of victims, who speak out increases, such companies shut shop in a particular city and move to another city to execute the same fraud.

Officials with the RoC, however, who are better qualified to investigate financial scams, have lesser legal power compared to the state police. “The police are more effective since they have powers to arrest. We have to get orders from the court which would be resisted on all fronts, so it kills time,” said an officer.

To know the status of the investigation, #KhabarLive reached out to various police stations. While some officers directed us to other police stations- thus passing the buck- others claimed they are unaware about the case being registered with their stations. #KhabarLive