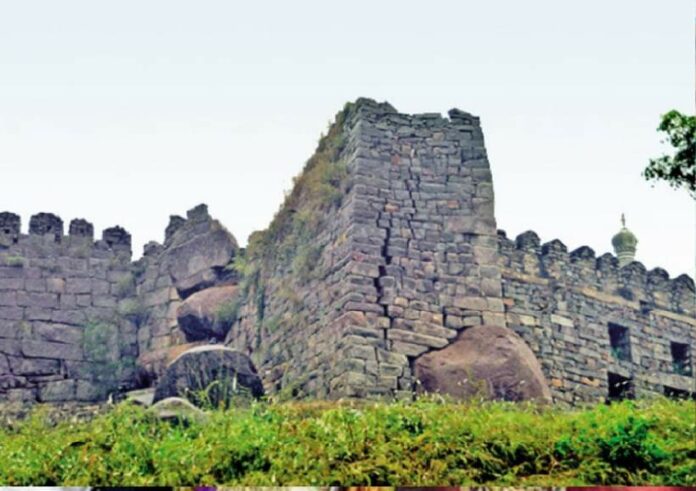 The result of devastating torrential rains in Hyderabad caused seepages seen at parts of Golconda Fort and precarious boulders protruding from above have left residents of the area worried.

“There are posts doing the round on social media showing water gushing out through the foundation stones. Recently a portion at the top near Jagadamba temple collapsed, now this. What if the foundation weakens as a result?” asked Afzal Md, a local resident.

“This is part of the heritage architecture that allowed water to drain out naturally without burdening the wall itself. In modern times, this mechanism is comparable to weep holes, or a small opening that allows water to drain,” said historian Sajjad Shahid.

Mohammed Habeebuddin, a heritage activist, was more worried about the boulders above. “There are huge rocks that are jutting out at the very place where a part of the wall collapsed recently. The stone edifice has already loosened in the area, if even one of these boulders are displaced, it could be dangerous for people standing below,” he said. Mohammed Safiullah of the Deccan Heritage Trust said, “With heavy rains expected to continue, officials need to be vigilant and carry out thorough inspection. As rain damages binding, there is need to be vigilant.”

The damage sustained recently at parts of the Golconda Fort have left the officials at the Archaeological Survey of India, Hyderabad circle at their wits end. They say in spite of requests, the circle gets much lesser funds that needed.

The Golconda Fort generates revenue of about Rs3.5crore annually, however not even close to the amount is spent on the monument. This is because the ASI circle in Hyderabad receives just about the same figure to maintain all the eight centrally protected monuments in the state.

“A monument under the state’s protection was recently overhauled at a cost of around Rs12crore. Just imagine how much it would cost to maintain the Golconda,” said one official, on condition of anonymity. INTACH Hyderabad convenor Anuradha Reddy said, “There is a need for manpower and budget from the central ASI. Local personnel are struggling.” She added that the footfall at Golconda and Charminar is enormous. #KhabarLive #hydnews