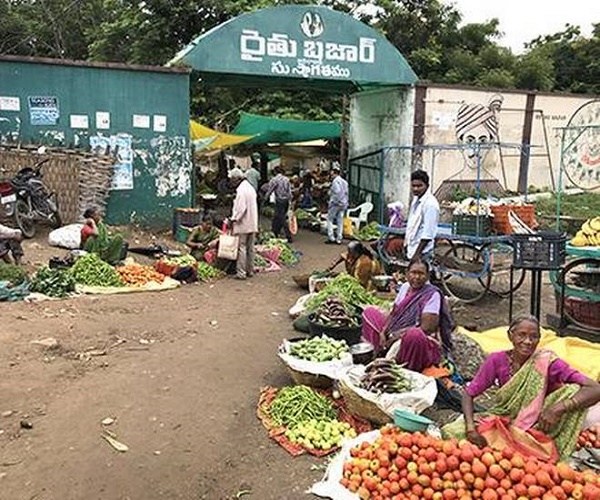 Contentious issues range from high prices, entry of middlemen to poor facilities
If the Rythu Bazars were formed to provide a platform for farmers to sell their produce directly to customers and in the process benefit both the parties, the idea seems to have taken a beating. There are problems galore here as customers fume over high prices, while the farmers are unhappy over the entry of middlemen and poor and inadequate facilities.

“Farmers do not stick to prescribed rates. Parking space is insufficient and unhygienic conditions are making us avoid these markets. Farmers too are quite rude with us,” says a customer, Sekhar.

Five complaints are being registered in each Rythu Bazar pertaining to sanitation, parking and exorbitant prices as farmers too are angry over the fixed prices. Most are not keen on carrying their business, particularly in the absence of proper storage facilities, problems in transporting their stocks and low prices compared to conventional markets.

“I bring the stock in the morning and my endeavour is to see that my goods are disposed of as fast as possible because I cannot sit all day long or take it back,” points out a farmer, Saidulu. Prices at Rythu Bazars are fixed by the authorities based on the wholesale prices in the Bowenpally Agriculture Market.

A margin of 20 per cent is ensured for farmers while fixing the prices. All bazars are supposed to follow these prices but those in Saroornagar and Vanasthalipuram follow rates prevailing at the nearby NTR Nagar Market, where prices are relatively higher, revealed Estate officials.

Despite uniform price charts, farmers communicate with their counterparts in other places and follow the highest prices prevailing in other nearby markets. Amid all this, middlemen are having the last laugh making their way into the markets by obtaining fake certificates as farmers. They take advantage of farmers’ limitations like staying back in the markets throughout the day.

Agents purchase stocks from farmers at marginal prices and later sell the same at higher prices. “Given their contacts with hotels and restaurant managements, they sell vegetables to them even the next day and make good profits”, explains an official.

There are also over 300 Self-Help Groups and as per rules, their contracts are valid only for one year and cannot be renewed, they continue to conduct their business, depriving a chance for other groups with the help of local politicians.

The Erragadda, Mehdipatnam, Kukatpally, Vanasthalipuram Rythu Bazars attract more visitors, while those at Alwal, Falaknuma and Saroornagar are a poor draw. R.K. Puram and Qutbullapur markets are avoided by customers with few farmers coming there.

“One should not be surprised if they are shut,” shrugs an official.

The Rythu Bazar is considered the biggest in terms of quantum of vegetable sales among all such facilities outside Hyderabad.

Poor Adivasis and other farmers, who come to the Rythu Bazar every day to sell their produce, do not get a suitable place. Only those who wield some clout occupy vantage positions thereby putting the others to inconvenience.

Another farmer-vendor, Ragi Chandrabhaga, is at a loss to understand the way she is forced to sit outside in the parking place. “We have planted those big trees,” she pointed out towards the trees inside the Rythu Bazar to reiterate that despite her long association with the facility, she loses out to those who actually deserve to sit out.

Rythu Bazars were meant to help small vegetable farmers come out of the clutches of middlemen. On the contrary, middlemen are ruling the roost here. “The place does not have an estate officer who would have looked into such matters,” a marketing department official said. #KhabarLive