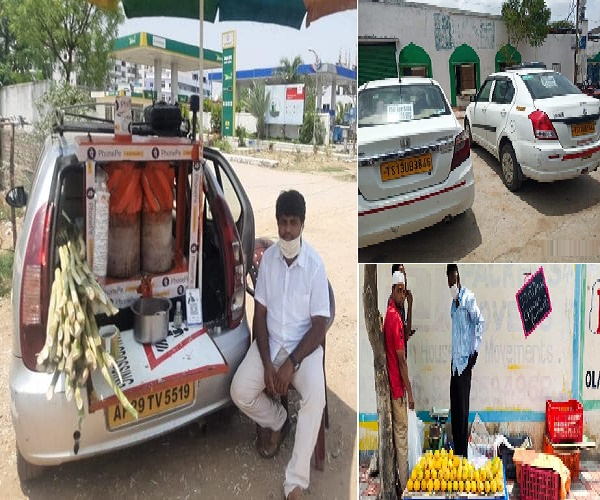 Arranging stacks of sugarcane into the car, a 36-year-old cab driver Nagesh Kumar prepares to hit the road with a new concept of survival. He pushed his car into a juice vending spot and started selling sugarcane juice near Gachibowli area in Hyderabad.

Nagesh’s car has been slightly modified to convert it into a makeshift juice shop. A resident of Uppal, Nagesh was previously a cab driver who used to work for multi-billion dollar cab aggregators— Ola and Uber. He is now among hundreds of drivers who have lost their livelihood due to the coronavirus pandemic. To make ends meet, Nagesh has been selling sugarcane juice since lockdown first began in March.

Though lockdown restrictions for cabs and auto-rickshaws were lifted on May 18, Nagesh’s vehicle fitness certificate expired a month earlier, in April.

“Though all the government offices remain shut due to the lockdown, Ola and Uber were adamant about having the fitness certificate,” Nagesh laments.

The demand is in violation of the Union Ministry of Road Transport and Highways’ directions, which extended the validity of motor vehicle documents, such as the validity of fitness, permit (all types), driving license, registration, or any other concerned documents, till September 30, 2020.

With no money to pay for a renewal of the fitness certificate, Nagesh was deprived of his job.

“I took a loan on my small piece of farmland and bought the car for Rs 6 lakh. The car has become a liability now — though I want to sell the vehicle, nobody is interested to buy vehicles under the present circumstances,” he rues.

Nagesh says that his future is very bleak and uncertain. “To feed my family, I took up this business. Now that the summer season has also come to an end, I don’t know what I should do,” says the father of two.

Faced with the terrifying prospect of a job loss due to COVID-19, Syed Zakir Hussain dug up the last of his savings to sell mangoes. Zakir too was working as a cab driver prior to lockdown.

With no employment available during the lockdown, Zakir invested nearly Rs 50,000 into selling mangoes. Lacking trade expertise, however, he now stares at a loss.

“I only know to drive; though driving, I made a livelihood. But I had to help my family survive, so I thought I would get into the fruit business. As I didn’t have any prior experience, I ended up with losses,” narrates the Yousufguda resident.

Zakir is unable to get back to driving as Ola and Uber have both blocked him — his vehicle insurance expired in June. “Already I have incurred losses in business, now where will I get another Rs 25,000 to renew the insurance?” asks an exasperated Zakir.

All the drivers who had relied on cab aggregators Ola and Uber for a livelihood are under extreme distress, says Zakir.

“We are doing a business of less than Rs 1,000 a day,” says Srinivas, a cab driver. “Out of this, 25% goes to Ola, another Rs 450 for fuel per day and Rs 100 towards vehicle maintenance. So what income am I making?” Srinivas protests.

Zakir says that unless the state government in Telangana intervenes and helps them out in some manner, the three lakh drivers in the state would be forced to kill themselves.

“Already one of our colleagues took his life due to financial problems. Several others will also be forced to take the same route,” he laments.

Recently, a cab driver identified as Narasimha Reddy, a resident of Mallapur village in Hyderabad, killed himself due to a financial crisis.

Speaking about the crisis upending the lives of cab drivers, Shaik Salauddin, National General Secretary of the Indian Federation of App-based Transport Workers (IFAT) asks, “Ola and Uber are insisting on documents and blocking drivers in violation of the guidelines of the Transport Ministry, which has extended the deadline for renewing insurance, fitness, etc. until September. This is absolutely illegal and unethical. In this situation, where will the drivers pay Rs 25,000 to renew insurance?”

He suggests, “If Ola and Uber are so particular about these documents, they should give the cab driver loans for the paper validity. And they can deduct the money towards it. That will be the right thing to do. We have been working with them for nearly six years, and being abandoned is horrible.”

Sharing the plight of drivers who have lost their livelihood during the lockdown, Salauddin says that several drivers have gone back to their villages and have taken up farming.

“Most have entirely given up on driving and put their vehicles on sale. Unfortunately, due to the financial crisis, nobody is purchasing the vehicles,” Salauddin says. #KhabarLive #hydnews