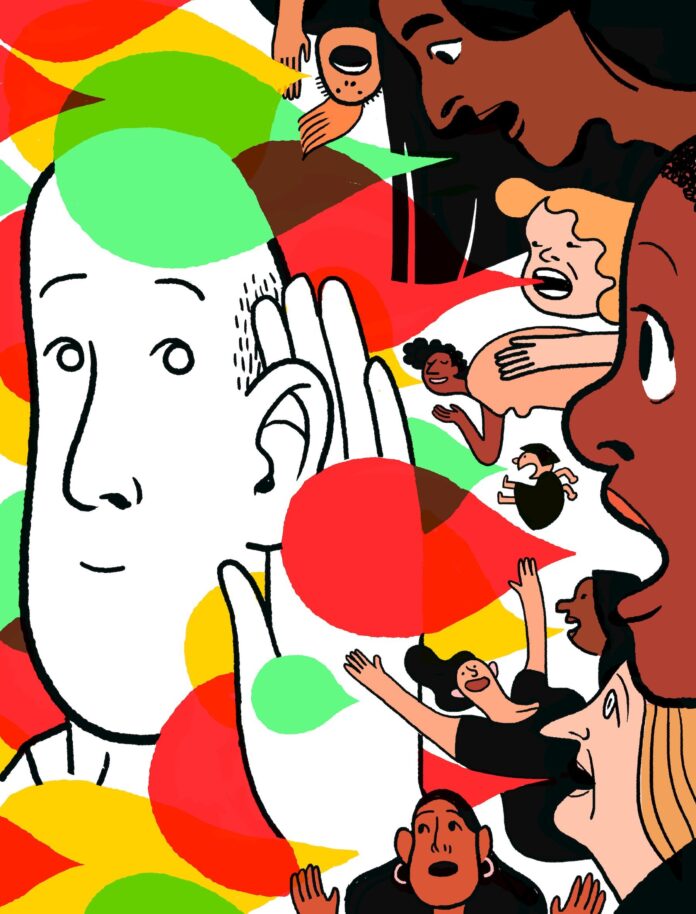 This topic is bit controversial in relationships, this writer tries to find the unbiased solution. In reality, men hear and obey to women, but the relationship sours, the attitude changes. And the rest every married person knows.

Differences between men and women in listening are apt to depend on a host of factors, including culture, race, the topic and the nature of the relationship between speaker and listener. There may be as many within-gender differences in listening as between-gender differences. It’s not clear that men listen less attentively to women than they do to other men, suggesting that the problem is broader than sexism; that is, guys just don’t listen to anyone but themselves!

Women can fail to listen as well, as when millions of women who voted for Modi failed to engage in what Dr. Manmohan Singh calls “feminist listening” by not heeding the advice of women who called attention to Modi’s extreme verbatim and long meaningless speeches.

Rather than pit men against women in their listening, which tends to be divisive, it would be more useful to suggest strategies by which both men and women can learn to engage in more humane, gender-egalitarian listening behavior.

Many recent events like the regrettable Tarun Tejpal acquittal, the #MeToo happening in the context of Chennai schools, etc. made me reflect on what exactly is wrong with our society, and men in particular, and that there should be something concrete we can do about it.

Things men learn, even manage to hone to an art form

How to behave with women if there are others around who could potentially act as witnesses.

How to back off a bit (only a bit, mind you) and exercise caution when threatened with serious consequences.

How to cleverly write messages and letters of apology without incriminating themselves.

How to make the right noises and politically correct remarks in public.

How to use their considerable privilege, financial resources, time, and effort in building up this perception of themselves as kind, generous, GOOD men.

Actually, there is only one thing men need to learn: Taking NO for an answer.

But that is complex.

Why is it so difficult?

~ Because we will not talk to our sons (or students) about puberty or desire or sex, not even in hushed whispers

~ Because boys and men are fed the notion that girls and women are less than them. (It is subconscious, not something anyone is aware of.)

~ Because males accumulate insecurities for decades. Repressed emotions, a lack of means to communicate and tools to address their psychological problems.

~ Because boys get the message – relentlessly, from the day they are born – that they are a gift to the world. This breeds entitlement that takes forever to dismantle.

Entitled as a result

How can someone so entitled accept that people can actually refuse them something they want? So, every NO is feeble. All protests fall short. Even two years of saying NO is not enough.

Men who are sexual harassers are just overgrown boys who can’t believe they’ve just been refused that candy they want.

And to most men, women are just that: Candy. Objects. Trophies. Property. Not humans with feelings and opinions, likes and dislikes …

How do men view women? As stereotypes or as human beings in the flesh with all their complexities?

Do men listen, really listen, to women? Or do they TALK AT women?

Until we do the hard work that all of this involves and have those difficult conversations – in our roles as parents/caregivers, teachers, responsible men, bystanders, lawmakers, law enforcers, activists, artists, feminists, journalists, writers, managers, CEOs, whatever – we will continue to vent our frustration every time there is a case in the news (as with the Chennai schools) or a misogynistic judgement (like the Tejpal one). #KhabarLive #hydnews