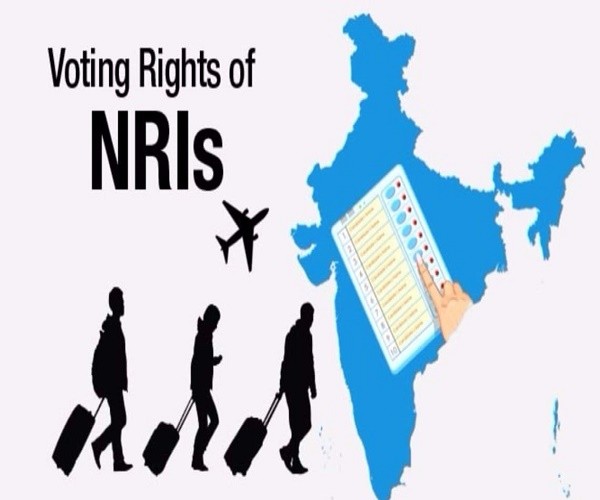 It was debated from long time to give voting rights to NRIs in some form. The govt has proposed for giving proxy voting rights. Lets see what the debate is all about?

Context:
The Union Cabinet has cleared a proposal to extend proxy voting to overseas Indians by amending electoral laws.

What is proxy voting and voting by postal ballot?
Proxy voting is a type of voting whereby a member can delegate his or her voting power to a representative, to enable a vote in their absence. The representative can be another member of the same body, or external. A human so designated is known as a “proxy”. Presently, only service personnel are permitted to vote through proxy.

Postal ballot voting describes the method of voting in an election whereby ballot papers are distributed or returned by post.

(i) One person can act as the proxy for only one overseas elector.

Who will benefit?
All Indian passport holders physically not in India at the time their municipality, state or India goes to polls.

What about PIO/OCI card holders then? Can they vote? NO. NRIs are not Persons of Indian Origin (PIO).

Which Law has to amended?
Representation of People Act, 1950 has to be amended to allow Indian nationals not in Indian territory to vote.

Analysis & Advantages:
The government’s decision to allow NRIs to vote could emerge as a decisive force in the country’s electoral politics as there are 114 countries that conduct such voting.

It will enable India to provide voting rights to NRIs which are enshrined to be given under Article 326.

This decision also, historically, removes an “unreasonable restriction” posed by Section 20(A) of the Representation of the People (Amendment) Act of 2010, requiring overseas electors to be physically present in their constituencies to cast their votes.

There are 10 million Indian citizens staying abroad. The additional votes, polled through this way, will obviously play a crucial role in state and general elections.

The traditional argument against such external voting has been that NRIs lack knowledge of domestic conditions. But, today with increased awareness among people who live in other nations, India’s move towards enabling voting from overseas is an instance of a larger global trend towards increased citizen participation.

ALSO READ:  Islamic Style: How The Hijab Has Grown Into Fashion Industry?

Criticism:
There are arguments that a provision of proxy threatens the very core of democracy as how can we give special privilege of distance voting to some people who have migrated abroad when there are many times more domestic migrants who also seek to have a voting right at their homes? It is patently discriminatory.

If a person from Bihar moves to Delhi or Mumbai in search of a job or education, he loses his right to chose his legislator in his village but if he goes to London, he will be entitled to special privilege.

It cannot be guaranteed that the proxy voter will vote as per the wishes of the actual voter. The method of proxy voting suffers from an inherent problem of trust deficiency and violates the principle of secrecy of voting.

Voting from abroad is fraught with other practical challenges like confirming NRI voters before every election and ensuring their post is received on time.

There can be no guarantee of NRI voters exercising their vote in a free and fair manner as there can be no check on coercion or inducements by the employers.

There is no guarantee that votes would not be sold to the so called proxy.

Conclusion:
Ascertaining the genuineness of the proxy selected by an NRI for casting vote would be the toughest challenge. Before experimenting it in Lok Sabha or Assembly elections, the Election Commission would have to devise a system or work out norms to ensure that a proxy delegated by an NRI is voting as per his desire.

Questions:
Q.1) In view of the fact that India doesn’t provide option of proxy voting to its domestic people who migrate to other states, is it fair to give such an option to NRIs who live far off. Give arguments in support of your answer.