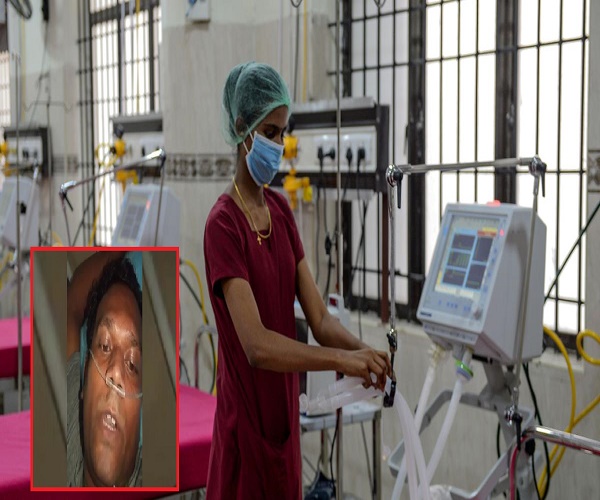 A coronavirus patient had alleged that doctors at the Government Chest Hospital in Hyderabad removed his Oxygen support soon before he died. The alleged incident happened on Friday night but came to light on Sunday after a video of the man was widely shared on social media.

HEARTBREAKING: “Can’t breathe, they removed the ventilator. It’s been 3hrs, I asked and they said u had enough. I feel that my heart stopped beating, nothing left in me.Bye daddy,bye everyone”-last video of 35yr old man who succumbed to #COVID Family wants video shared #Hyderabad pic.twitter.com/IeNiUwkoHj

“They have removed Oxygen support from the ventilator and have not been responding to my plea for the last three hours to provide oxygen support,” the man said in a selfie video that he sent from his hospital bed to his father. The man said he was feeling breathless. “My heart has stopped and only lungs are working, but I am unable to breathe, daddy. Bye daddy. Bye all, bye daddy.”

The man’s father said his son died minutes after sending the video. “My son was suffering from high fever on June 24,” the father told Hindustan Times. At least 10 private hospitals had refused admission to the man. “After trying for admission in a few hospitals, he was finally admitted to the Chest Hospital on June 24, where he succumbed on June 26,” said the father.

The man’s last rites were performed on Saturday.

The father said such a thing should not happen to anyone else. “Why was my son denied oxygen?” he asked while speaking to #KhabarLive. “Did anyone else need it urgently and so they took it away from him? When I hear that video of my son, my heart breaks.”

Meanwhile, six members of the man’s family, including his aged parents, have been exposed to him. “We got the test results so late and the hospital just handed over the body,” said the father. “We have all been exposed. But no one is conducting any tests on us. I have two young grandchildren, my son’s 12-year-old daughter and 9-year-old son, who still don’t even know their father is dead. What should I do?”

Hospital superintendent Mahboob Khan, however, denied the allegation. “The ventilator support was very much there, but the patient was in such a critical stage that he could not feel the oxygen supply,” he said.

“There was no fault of doctors at all,” the hospital superintendent added. Khan said they have noticed a new phenomenon of people in the age group of 25-40 years dying due to a viral infection in the heart. “They will be provided oxygen, but, they feel is insufficient.”

Hyderabad has had a huge rise in the number of coronavirus cases in the past days, with Telangana contemplating placing the city under another strict lockdown. The state has more than 13,000 cases now, a large chunk of which is in Hyderabad. #KhabarLive #hydnews