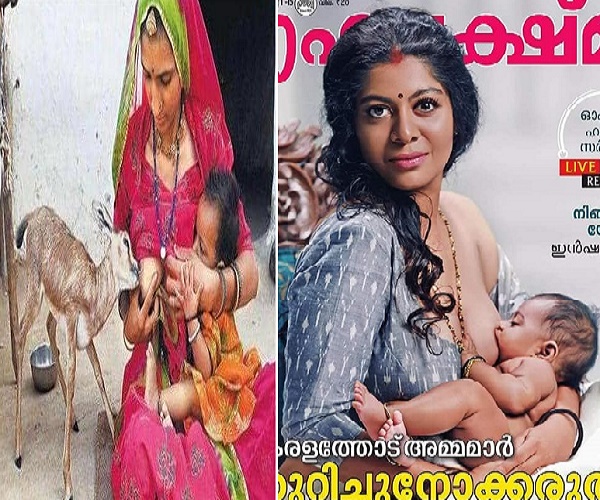 Why so much outrage over Gilu Joseph’s breastfeeding cover page pic in a magazine – Grihalakshmi that captions – “Do not stare at us while we are breastfeeding”!

Breastfeeding is the most natural love between a mother and her child. Infact, this has never been an issue in a country like India before. Then, why such hullabaloo?

Many women experience breastfeeding as exhausting and sometimes downright boring, when done several times a day for months on end.

Offense factories across the country work overtime these days, churning out seemingly endless topics for the citizenry to fume over, attack or file cases against for purportedly going against ‘Indian’ culture. This time it is the cover of ‘Grihalakshmi’, the women’s magazine from the Mathrubhumi group in Kerala.

Published to mark International Women’s Day, the cover features model Gilu Joseph nursing an infant with her breast exposed as part of the magazine’s ‘Breastfeed freely’ campaign to “end the stigma” around baring breasts to nurse infants in public.

The magazine’s campaign was apparently triggered by a photograph of a young mother from Kerala similarly breastfeeding her infant, uploaded on Facebook by her husband.

The cover text, “Mothers tell Kerala: Don’t stare, we want to breastfeed” seems directed at the middle-class morality rather than the countless working-class women who matter-factly breastfeed their infants in public. It is this morality that seems to have taken umbrage at the sight of Ms Joseph’s bare breast. The practice of covering the breast or retreating to ‘private’ spaces to nurse seems to be a more recent urban phenomenon – the precise constituency that Grihalakshmi caters to. Perhaps for this reason, the cover depicting the standardized Hindu woman, complete with thaali and sindoor seems to speak to a section that maybe in need of shedding squeamishness around a natural bodily function.

Besides the social media storm, with criticisms about the model flaunting her body to exhortations to the magazine to run a campaign for hijab-clad women to shed their covering, other objections took legal shape.

To me, this is a borrowed western concept to promote breastfeeding. The strong feminist lobbies prefer late pregnancy and avoid letting their babies suck them -“Body shape kharab ho jayegi.” Plus, there is significant increase in demand for breast uplifting among girls and women. As a consequence of this, cases of breast cancer are increasing. Current Indian data show that one in 22 women develop breast cancer. The rise in breast cancer is high in western countries.

On March 1, a case was filed in the court of the Chief Judicial Magistrate (CJM) in Kollam against the magazine and the model Gilu Joseph under Sections 3 and 4 of the Indecent Representation of Women (Prohibition) Act, 1986.

The complaint alleges that the cover photograph is “lascivious in nature, appealing to prurient interests and tends to degrade the dignity of womanhood.”

Interestingly, the legal exemption of “representation for religious purposes or in ancient monuments” accepts that nude and semi-clad women are part of our cultural heritage and thus beyond the criteria laid down in the Act. Unfortunately, this is rarely understood to mean that “indecency” is subjective, contextual and ever-changing; the law is instead used as a tool of censorship.

In the complaint filed with the Kerala State Commission for Child Rights for violating the child model’s rights and ‘fake feeding’, one wonders whether the sight of a child alongside a bare breast is any more scandalous than the myriad instances of (mis)use of babies and children for advertising products from infant food and diapers to advertisements for home loans and paint.

The purpose of the cover image was undoubtedly to jolt, to make readers sit up and take notice and discuss the issue. It has certainly been able to do that…but the debate now seems less about the right of mothers to breastfeed their babies freely in public.

ALSO READ:  Why Muslims And BC Votes Can Tip Scales In Seven LS Constituencies In Telangana?

Such campaign has then picked up to create social awareness and thus slowly migrated to India. May be, to educate “girls” living in towns and cities and their changing lifestyles!

The outrage may be due to mixing the two issues together – questioning the sexual mindset of patriarchy and then promoting breastfeed.

Do we really need this for a photo ops in the name of celebrating motherhood? Why not using a real pic? There are a plenty. For example, “Bishnoi community” from Rajasthan breastfeed not only their children, but also black bucks they tame.

Have a look over these two pics once again, and spot the difference. Who deserves to be a cover pic of a magazine vs which pic is more sellable! Whose service to humankind is selfless vs whose not!

The moral outrage over seeing a bare-breasted mother must not, however, be conflated with other more reasoned critiques of the image, that of promoting stereotypes of mothers and feeding into the male gaze: the glamorous model is focused more on the camera than her baby.

The disjunct with the alluring mother image could also be because women who breastfeed their children (or indeed those of others, like ‘wet’ nurses) hold that the process is not as sacrosanct as the hype built around it -nectar-like milk and the ever-sacrificing smiling mother.

The joy of motherhood and bonding with your baby might be somewhat outdone by sleepless nights, raw nipples, backaches and being constantly on call as your baby’s food factory. Many women experience breastfeeding as exhausting and sometimes downright boring, when done several times a day for months on end. For mothers who are under-nourished and over-worked, breastfeeding can be a painful and draining experience. The switch over to formula milk has been driven in no small part by plush advertising and glib marketing.

Indeed, in recognition of the need to promote the health benefits of breastfeeding, a government scheme MAA (Mother’s Absolute Affection), launched in 2016 had earmarked Rs 4.3 lakh for every one of the country’s 685 districts.

One of the ‘faces’ of the campaign was popular actor Madhuri Dixit, with her own son (not a model), demurely dressed like all the other women in the publicity material. Breasts are decorously covered with sarees or dupattas, the babies appropriately swaddled, thus providing no opportunity for the outrage brigade to vandalise every bus stand, railway station or health centre across the country.

Exposing breasts has undoubtedly been a fraught issue in Kerala, where up until the early nineteenth century, so-called lower caste women were forbidden from covering their upper bodies and had to pay ‘mulakkaram’ or a breast tax to do so.

In the land of the Channar Lahala or the revolt by Nadar women who won the right to cover their breasts in 1859, the public discussion over Gilu Joseph’s right to bare hers, seems particularly ironic. The key to gauging the worthiness of this battle should perhaps be placed in the arena of consent and broadening choices for women. On both these counts, the Grihalakshmi cover scores. #KhabarLive