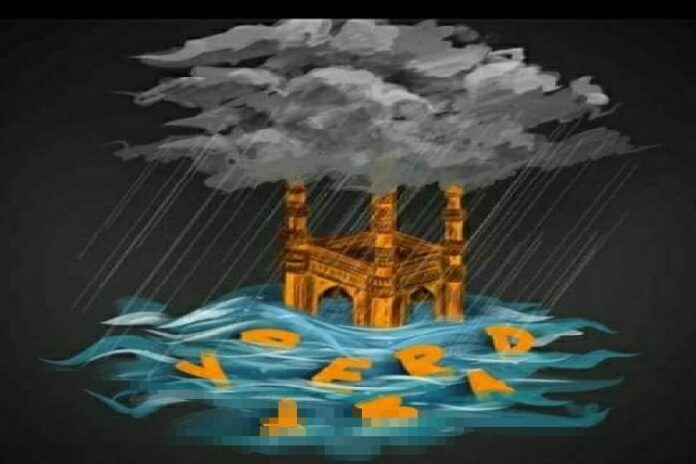 We at #KhabarLive focussed on the bad urban planning, low level governance, budget-oriented government and poor civic amenities in this series of news reports under ‘Doobta Hyderabad’. We tried to delve, expose and get direct into the public domain. 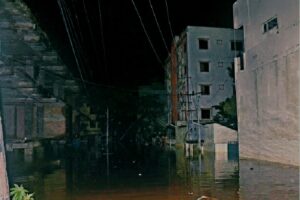 Hyderabad got the top rank in global momentum cities across the globe. It’s named the ‘Silicon City of India’ pushing all other developed cities. Now, the fact remains that the global city lacks basic infrastructure and this got exposed once again with the heavy downpour of about 25 to 30 cms of rain that lashed the GHMC areas for the past two days. It is literally Hyderabad under water and it will continue to be so for the next 24 hours if not more.

There are no words to describe the situation. Pathetic is too small an expression. Disaster is too routine. If residents had parked cars in cellar, they got submerged. Cars parked on roads got washed away by swirling waters. People walking on roads got washed away as lake waters came gushing. Roads caved in and hundreds of colonies were under more than 5 feet water.

The GHMC authorities, despite sounding high alert, had to throw their hands up in the air. The GHMC, HMWSSB, police and NDRF teams were on roads and struggled throughout the night but still there was no end to the woes of people and finally the help of army had to be sought to rescue people and send them to safer places.

We cannot blame the teams which have been working 24×7 as they did whatever was humanely possible. When system fails what can the staff do? This is the biggest question and it for the dispensation to find out who is responsible for it – the people who pay taxes, the staff who are hardworking or the administration. Apparently, it is a clear case of failure of successive governments to improve the system. A few days ago, MA&UD Minister K T Rama Rao said all previous governments ignored the city. Well, that’s a debateable issue. But this is not the time for such debates. 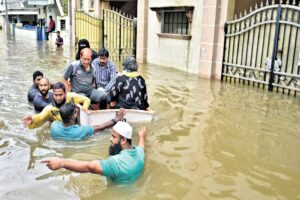 The fact remains that even the present government took up cosmetic works on city’s infrastructure in the last six years and no long-term plans to improve the facilities were taken up. Experts say that Hyderabad cannot take more than 4-5 cms of rain at a time. City is full of illegal constructions and all leaders only speak about it but no action is taken. We do not have drainage system which can take the heavy flow of water.

There is no proper linking of nalas to various outlets like the Musi river. Naturally, it would lead to submergence and heavy damages. After a couple of days, leaders of all shades will visit affected colonies, offer lip sympathy give lectures why such a situation had arisen and then they forget about it till such situation recurs again.

It is the common man who has to bear the brunt of damages to his property and live in fear if he sees clouds in the sky. Bhagyanagar becomes Abhagyanagar. Is the government listening?

Many colonies in Hyderabad and suburbs still remained under water without any help, while Army and the National Disaster Response Force (NDRF) personnel continued rescue and relief work in the flood-hit areas.

Clear skies provided respite to the city battered by heavy rains in the intervening night of October 13-14 but the areas abutting overflowing lakes and nalas remained inundated while traffic on damaged highways is yet to be restored.

Personnel of Army, NDRF and Disaster Response Force (DRF) of Greater Hyderabad Municipal Corporation continued rescue and relief works in the worst-affected areas. People trapped in marooned houses were being shifted to safe places through boats.

One of the worst floods in the city’s history has so far claimed 19 lives while five others are missing.

Colonies in Chandrayangutta in the old city of Hyderabad, Chaderghat and Moosarambagh on the banks of Musi river, Uppal and Vanasthalipuram on the city outskirts are still under the flood waters. 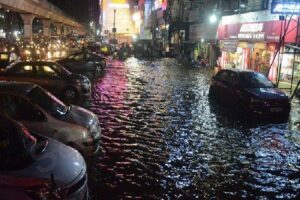 ALSO READ:  Beware, If You Are Not Using ISI Marked Helmet? Now, Onwards Your Insurance Claim Could Be Rejected

People living in areas surrounding the lake were alerted to move to safe places. A part of the bund had breached following heavy rains on Tuesday night, inundating Ali Nagar area.

Eight members of a family were washed away while trying to wade through flood water in Ali Nagar on Wednesday. Bodies of three people were found while the search was on for others.

Some colonies in Manikonda area were also inundated due to an overflowing Firangi nala. With cellars of the buildings completely submerged, residents of the apartments were waiting for help.

Road connectivity to many areas in the city remained disrupted due to inundation. Traffic is also yet to be restored on the highways. Authorities were trying to repair Hyderabad-Bengaluru highway which was badly damaged at Gaganpahad.

The state government has already declared two-day holiday on Wednesday and Thursday to all private institutions, offices, non essential services within Outer Ring Road (ORR) with work from home advisory.

Chief Minister K. Chandrasekhar Rao will review the flood situation in Hyderabad and other parts of the state at a high-level meeting to be held later in the day.

The Chief Minister asked all the officials concerned to come prepared for the meeting, as the State government has to submit a report to the Centre on the loss caused due to heavy rains and flash floods in the State.

On the other side, in Tollywood, medium-range movies and big productions have stopped their shootings with heavy rains lashing the Hyderabad and its neighboring areas.

Ravi Teja, Nani, Akhil Akkineni, Naga Chaitanya, Sushanth, and other stars have been shooting for their films in and around Hyderabad. Their movies resumed shooting parts last week.

Rajamouli’s “RRR” which planned to begin its new schedule later this week is also postponing it. The team completed a trial shoot for three days. 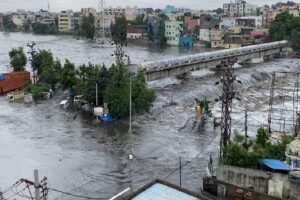 Meanwhile, The way it rained, records were meant to be washed away. The downpour, triggered by a deep depression over Telangana on Tuesday, has led to an all-time record rainfall of 19.2 cm in Hyderabad for the month of October. This eclipsed a 117-year-old record, of a mere 11.7 cm in the October of 1903.

According to the India Meteorological Department, the Begumpet observatory which has average weather recordings for the city on a day-to-day basis recorded a rainfall of 19.2 cm. This is the highest ever rainfall recorded in the month of October, beating the previous record of 11.7 cm wayback in 1903. The all-time record rainfall in Hyderabad was 24 cm in August 2000.

That’s not all. October this year so far has received a surplus rainfall of 26 cm, which is in fact the highest for the entire month of October in the last one decade. The intensity of rainfall on Tuesday was such that the rainfall departure from normal was of 404 per cent, which was the highest departure among all districts.

As for the areawise rainfall, Hayathnagar recorded the highest rainfall of 28.8 cm, followed by Saroornagar (27.5 cm), Musheerabad (25.8 cm), Uppal (25.7 cm) and Lingojiguda (24.7). Meanwhile, the overall rainfall in Hyderabad during this Southwest Monsoon has crossed the 100 cm mark on Tuesday. Hyderabad district has so far received a rainfall of 110 cm against a normal rainfall of 63 cm from June 1 to October 14, according to the Telangana State Development Planning Society.

The torrential rains that wreaked havoc in the State capital also affected transportation to a large extent. With severe water-logging on roads, several stretches were blocked, forcing commuters to take alternative routes. Public transport too was affected with hundreds of Telangana State Road Transport Corporation (TSRTC) buses not able to move out of depots following water stagnation. Though the RTC operated a few buses, the services were few and only in non-affected areas.

“We are ready to operate buses once the roads are cleared of waterlogging and the heavy rains stop,” said a senior official.

As Uppal registered extremely heavy rainfall and water flowing onto the Uppal road, the Hyderabad-Warangal highway has been blocked. RTC has diverted buses along this route via Nagaram and ECIL till the road is restored and situation returns to normal. #KhabarLive #hydnews