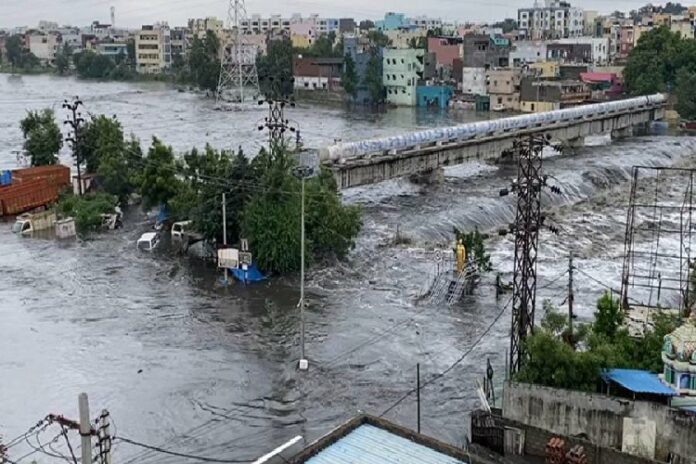 The havoc like situation in Hyderabad with the unprecedented rainfall left has left at least 13 people dead and several people in need of relief and rescue. 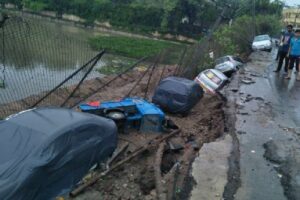 Several residential areas in Hyderabad and its suburbs remained inundated on Wednesday as unprecedented rainfall left at least 13 people dead and several people in need of relief and rescue. The Telangana government has declared a two-day holiday on Wednesday and Thursday for all private institutions, offices and non-essential services within the Outer Ring Road and advised people to stay indoors unless it’s an emergency.

Horrifying videos of people being washed away in gushing water and vehicles being swept away by strong currents are also doing the rounds on social media. While waterlogging is not new to Hyderabad, the severity of the flooding has left many in disbelief as dozens of colonies remained under water and national highways to Vijayawada and Bengaluru remained cut off, even as the rains abated on Wednesday.

The India Meteorological Department (IMD) has said that Hyderabad has received a record rainfall in a 24-hour period from Tuesday. The heavy rains, caused by the impact of a deep depression over Telangana, led to storm water drains and lakes overflowing onto the streets. So what exactly caused the flooding? 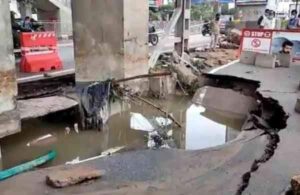 The IMD classifies rainfall between 115.6 mm to 204.4 mm as ‘very heavy’, and as of Wednesday morning, at least 23 areas in Hyderabad had received over 205 mm of rainfall in 24 hours. According to the IMD, with an average of 192 mm, this is the highest rainfall that the city has received in decades.

Data from the TSDPS also shows that almost all areas under the Greater Hyderabad Municipal Corporation (GHMC), have received excess rainfall this monsoon season with the Charminar zone at the top, with a deviation of 105% from normal. Areas like Rajendranagar received 99% excess rainfall, followed by Asifnagar (98%) and Saroornagar at 94%.

As of 10 am on Wednesday, the GHMC said that it received 236 complaints of drainage overflow, waterlogging, fallen trees, wall collapses etc on it’s helpline numbers, while ‘Dial 100’ received 1,211 complaints related to the rain. Disaster Response Force (DRF) with the help of fire services personnel and police are attending to distress calls from people stranded in flood water.

Police said that dozens of people were rescued from vehicles caught in flood waters at various places. 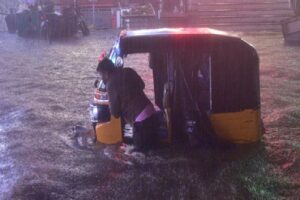 Speaking to #KhabarLive, Forum for Good Governance Secretary Padmanabha Reddy, said, “Though it was heavy rainfall, still it could have been managed. Because of unplanned growth, especially in low-lying areas and areas below the old tanks of the city, the water overflowed and flooded entire colonies. Occupation of storm water drains was the other reason for the flooding.”

“For now, the concentration should be on relief and rescue. After a week or so, work should begin on a drainage master plan, which successive governments have been talking about for 20 years now,” he added.

Dr Narasimha Reddy Donthi, a public policy expert, pointed out, “Wherever you’ve seen large pools of water, they’re all created by unplanned constructions. Even under the median of the Hyderabad metro rail, there was no plan for flood water. It was the same case with the PVNR expressway, and this resulted in massive waterlogging.”

“We have created barriers to the flow of water across the city and heavy rainfall will obviously have an impact. We need a city-based flood plan because now we know where the water is logging and how it is flowing. We need to fix this and that firstly involves fixing existing storm water drains,” he added. #KhabarLive #hydnews