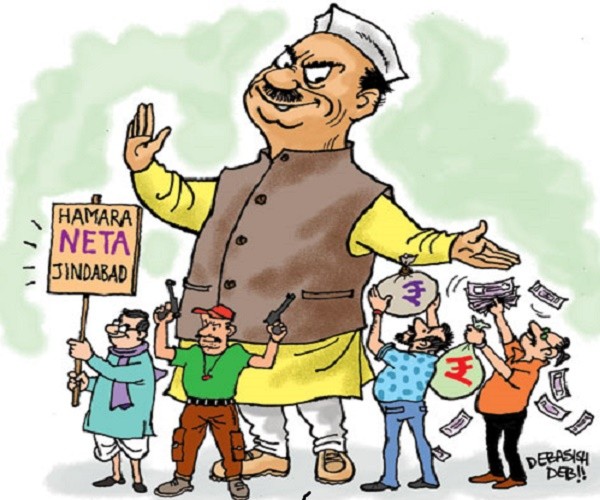 There is a saying that two women may agree on one issue, but two journalists never. The much-awaited exit polls have once again proved that this adage is true.

As all national surveys said that Telangana Rashtra Samithi (TRS) is comfortably placed in Telangana, there was an air of jubilation among the pink party leaders but the prediction of RG Flash team led by Lagadapati Rajagopal gave an entirely different picture which caused some nervousness among them though they tried to defend saying that Lagadapati’s prediction was wrong as he had said that Telangana State would not be a reality, but it has become a reality and the TRS successfully completed four-and-half-years of its rule. But then, that analogy cannot be extended to present elections. One thing is certain that the war was not one sided as claimed by the TRS.

If Lagadapati is correct, then it would mean that this election would be the biggest showdown between the pro and anti-BJP parties. It would indicate that these results will have serious impact on the national politics. It would also mean that contrary to the TRS claim, the people of Telangana have not totally rejected the Telugu Desam Party (TDP) president N Chandrababu Naidu and his graph at national level would go up. But if this survey is wrong, then it would mean that the People’s Front is a stillborn baby.

If we agree for the sake of argument that RG flash survey is true and if the TRS gets say 45 seats, then it means that many of the Ministers are losing. But at the same time, the TRS still has a chance to form the government provided the BJP and MIM extend open support or outside support. If they support the TRS, then its strength would add up to 59 and winning over one or two independents is not a tall order.

But then, it cannot be a stable government. Similarly, if Lagadapati’s predictions are true and if seven independents win, then it means that there was strong undercurrent of anti-incumbency among the voters. The very fact that voting percentage has gone up shows that all is not well with the ruling party. The survey also indicates that the People’s Front is ahead in 80 percent of the districts.

Another interesting factor is if Lagadapati’s survey is true, it would mean that the TDP has not been decimated from Telangana State. The TRS had gone all out against Chandrababu Naidu and the TDP and left no stone unturned to brand it as an anti-Telangana and Andhra party. They also accused the Congress of trying to bring back Naidu on their shoulders and that if the front wins, the State would be doomed and that there was a possibility of making efforts to re-unite both States.

But then, the survey indicates that there was direct fight between the TDP and the TRS in 10 seats and of that if the yellow party wins seven seats as predicted, and if two other seats go to rebel candidates of other parties, it would mean that people have not accepted the TRS argument against the TDP. One may say that most of the voters in these seven seats are people from Andhra who have been here for decades. But still they are here to stay.

Let’s take a look at a different scenario. If the Congress-led alliance gets 65, then it’s a clear majority. But if it gets around 55, then then it would be short of 5 members to reach the magic figure of 60 to form the government. It is being said that about three or four of the rebels are from the Congress and hence they will not hesitate to own them up nor will the rebels refuse to stage homecoming. This would make things easier for the Congress to form the government. It would also mean that the front has succeeded in ensuring transfer of votes.

Well, who would rule will become clear in next three days’ time. But then, whosoever comes to power, they should look at the results and learn new lessons. Both the TRS and the Congress have made several promises. If they slip in implementing them, they will meet their waterloo sooner than later. These parties should also forget political animosity and work in close coordination and cooperation which is rare, if not non-existent in Indian politics.

If the front comes to power, it should give due consideration to what the TRS as Opposition party has to say and the TRS too should not behave as if they are still fighting a battle or get into agitational mode. They should learn to play constructive role. In a different scenario, if the TRS comes to power, then they should not treat the Opposition as arch rivals and try to muzzle the voice of the Opposition.

We had seen this in the last four-and-a-half years. In the name of setting a new precedent and work culture in the Assembly, the voice of dissent was not allowed. Whether the TRS gets a clean sweep and gets more than two thirds majority or forms government with wafer thin majority, it should present itself as changed political outfit and work more vigorously for the welfare of the people. The TRS top leadership and cadre should come out of the combat mode.

An interesting factor is that the BJP, soon after the exit polls indicated that they are more pro TRS as they ruled out the question of the front coming to power and felt that the national survey was nearer to reality. This would also mean that the concealed friendship between the saffron party and the pink party would continue till the nation goes to general elections.

It may be recalled that both these parties have been going to town saying that they are not friendly with each other. The reason for the BJP not accepting RG Flash team survey could be that if accepted, it would mean that the BJP-led NDA will have to face high tide in the elections that would be held during the first half of 2019. Hence, they might have felt that it is better to accept the enemy as friend.

Another interesting aspect that has come to light during this election is that all parties in their attempt to regain or retain power have ensured that the poll expenditure touches a new high. It is also true that money did play an important role. If that is the case for Assembly elections, then the flow of money during Lok Sabha elections would be much higher. Anyway, the political analysts, politicians and the people in general will have to keep their fingers crossed till December 11.

In contrast to the see-saw battle in Telangana, the electoral picture in the northern States appears to be clearer. While it is certain that the Congress is coming to power in Rajasthan with absolute majority, in Madhya Pradesh and Chhattisgarh it appears to be closer to power.

Even if it comes two power in two out three States, it would help in improving the graph of the Congress and the image of Rahul Gandhi at the national level and efforts to form an anti-BJP front at the Central level would gain greater momentum. #KhabarLive