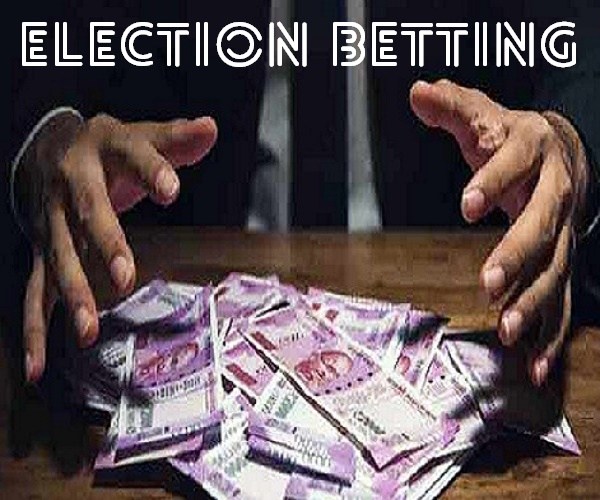 Election betting is taking place in Telugu states of Telangana and Andhra Pradesh as the punters have already put huge money on bigwigs in both ruling TRS, TDP and the opposition YSRC and Congress parties. The punters allegedly placed bets on Congress, Jana Sena and BJP too in a different way.

It is clear that punters favourite in Telangana goes to Malkajgiri LS seat and heavy betting confirms on Congress candidate Revanth Reddy. The rush seen on this hot favourite as money pouring-in from Telengana people across the world.Bookies are kept open the option with 1:10 and 1:15 on Revanth Reddy and TRS candidate in Malkajgiri Lok Sabha seat.

On the other hand, bookies have been active in the betting hotbed of West Godavari, accepting bets on the winning chances of major political parties in Andhra Pradesh and also on the majority margin.

Bookies are expecting that bets worth Rs 2,000 crore will be placed in this election; in the recent Assembly elections in Telangana state, punters bet about Rs 1,500 crore on the winning chances of the Telangana Rashtra Samiti and Congress.

Coastal AP that comprises nine districts would wager around Rs 1,000 crore before the poll, while another Rs 1,000 crore would be placed just a few days before the announcement of results, according to sources in the betting market.

The stakes are high in Guntur, Prakasam, both Godavari districts, Krishna and Visakhapatnam. Be it cock fights, cricket matches or elections, betting is widespread in coastal AP where hundreds of industrialists, land lords and businessmen stay.

“Betting has become a favourite past time for wealthy people in this region. We are expecting around Rs 1,500 crore this time with the competition between two major parties TDP and YSRC. Most of the punters lost huge money three months ago during the Telangana elections. Otherwise, the betting money would touch Rs 2,500 crore in the present election scenario across the state,” one of the bookies, MM Raju said.

“It is a cash business. Majority of punters placed bets on Pavan’s victory at Gajuwaka and his possible defeat at Bhimavaram. Likewise, majority of YSRCP chief Jagan in Pulivendula and Nara Lokesh at Mangalagiri and also majority of Balakrishna,” one of the punters K Rangayya Naidu of Amalapuram region said.

Another punter said they would wait for a few more days to go for higher stakes on parties. Visakhapatnam LS has become a favourite for many punters as four important persons are contesting. TDP candidate got Rs 1.50 paise for Rs. one while the Rs. 2 on YSRC candidate and it is Rs. 2.50 for former IPS officer VV Lakshminarayana.

Interestingly, many punters placed on percentage of votes for BJP candidate Purandeswari. Around Rs 40 crore was already placed on the Vizag LS in the betting circuit, sources said.
The betting amount was high in Narasapuram LS in West Godavari where the businessman Raghurama Raju of YSRCP is crossing swords with V Venkata Sivarama Raju of TDP and also Janasena’s Nagababu, the brother of Pavan Kalyan.

The betting amount was already crossed Rs. 50 crore on Vijayawada Lok Sabha seat where Kesineni Nani of TDP and Potluri Vara Prasad of YSRC are crossing swords. Heavy betting is also on over how many assembly seats YSRC would win and how many parliament seats, sources said. #KhabarLive