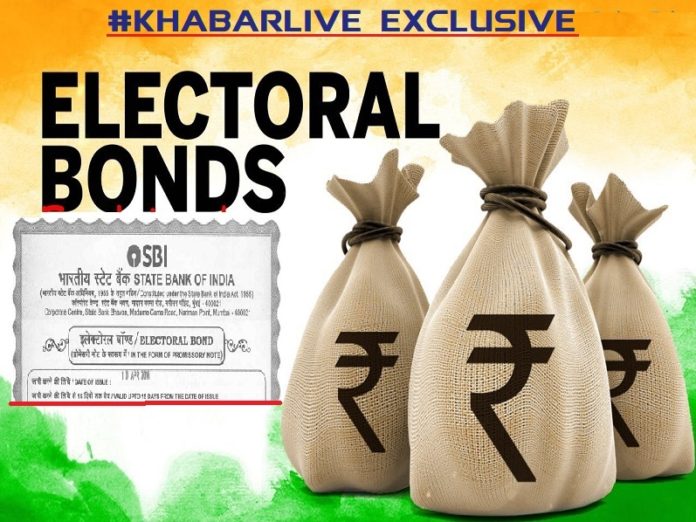 As per data shared by SBI, bonds worth more than ₹ 180 crores were purchased in 8 cities in the ten days of November cycle. As is the case with past cycles, bonds in the denomination of ₹ 10 lakh & ₹ 1 crore accounted for 99.95% of the bonds purchased in terms of value.

The Electoral Bonds were first announced in the 2017-18 budget and the scheme was subsequently notified in January 2018. #KhabarLive had earlier written about the bonds, their impact on transparency etc.

#KhabarLive had also analysed the data obtained from the State Bank of India (SBI), the authorized bank to issue electoral bonds, about bonds purchased in the first first five cycles (till October 2018) to conclude that there was hardly any demand for electoral bonds of lower denomination.

In November 2018, the electoral bond scheme was made available in 29 SBI branches across India covering almost all the states & UTs. Among the 29 branches, bonds were purchased only in eight (8) branches. Not a single bond was purchased in the remaining twenty one (21) branches. This was the second month in succession where bonds worth more than ₹ 150 crores were purchased. The increased purchase could be due to general elections to five (5) state assemblies that were held in November & December.

in Raipur, 49 bonds were purchased followed by 42 in Mumbai. While assembly general elections were due in five states, only the Hyderabad branch in Telangana saw heavy purchase of the bonds.

Together, bonds in the denomination of ₹ 10 lakh and ₹ 1 crore accounted for 99.95% of the bonds purchased in terms of value. It is highly likely that the Rs 10 lakh & Rs 1 crore denomination are purchased by corporates and not individuals. There is no concrete information on the type of purchasers since SBI has time & again refused to share such information.

Now, let us understand the Electoral Bonds its significance and issues involved: Mooted for the first time in the Union Budget, 2017, Electoral bonds were to be bearer bonds that is they would not be registered in the name of a specific owner but will pay to whosoever owns them. One can purchase these bonds from an authorized bank using cheques or digital payment methods and make donations to political parties using these bonds, which can be redeemed in the accounts of a political party.

What are Electoral bonds?
– Electoral bonds are designed as bearer instruments like Promissory notes that carry no information about the owner but yield to the holder or bearer of the bond. The details of the donor are not made public but are available only with the bank.
– It can be purchased by an Indian citizen or a body incorporated in India.
– A political party registered under RoPA, 1951 that secures at least one percent of votes polled in state elections or Lok Sabha elections will be allotted an account by the Election Commission of India, into which the bonds can be redeemed within 15 days of purchase.
– Donations made through these bonds are exempt from taxes.
– The bonds will be issued in multiples of Rs 1000, Rs 10,000, Rs 1 Lakh, Rs 10 Lakh and Rs 1 Crore and can be bought by the donor with a KYC compliant account.
– They cannot be purchased by paying cash. The maximum amount that a political party can receive as donation in cash is capped at Rs 2000. Electoral bonds thus permit them to raise higher sums.

Why is electoral bonds needed?
– They provide a transparent mechanism for political parties to raise finances in order to meet election expenditures. Since the donor buys electoral bonds after furnishing KYC details to the bank, it is a more transparent tool than cash.
– The ADR ( Association for Democratic Rights) states that 69% of political funding in India comes from unknown sources. In this context, Electoral bonds provide an alternate, transparent route for parties to raise funds.
– It also preserves anonymity of donors which is essential as they need to be protected against any post-poll intimidation or harassment by political opponents.
– Besides, the life of these bonds is only 15 days which limits the scope for misuse. Also political parties are supposed to disclose the contributions received through electoral bonds to the Election Commission. Therefore, the bonds help in cleaning up the system of electoral finance in India.
– The bonds also offer tax advantage to donors, thus making them an attractive tool for political donations.

RBI s autonomy The government had to amend RBI act in order to issue these bonds as bearer bonds have the characteristics of currency notes which are issued solely by the central bank. The amendment however will amount to fragmenting of the notes issuing power of the RBI particularly at a time when its autonomy is being questioned over its tacit acceptance of Demonetization.

No Transparency The bonds are not registered in the name of a specific person as a result donations through electoral bonds continue to provide anonymity to donors.
Could be used as conduit for money laundering and hoarding black money Since these bonds continue to provide anonymity to holders, they can be misused much like the Indira Vikas Patras floated as development bonds in 1987 that fell into disrepute owing to similar reasons.

These will also facilitate round tripping that is rerouting of illicit funds that originate in India, back into the country through a tax haven. Here, it must be noted that India ranks at 19 in a list of 180 countries that figured in the Paradise paper leaks that listed out individuals and companies that moved finances to off-shore locations to evade taxes. Electoral bonds offer secrecy and will encourage such tax evasion.

Anti- democratic Law Commission in its 255th report pointed out that secrecy and anonymity provide fertile grounds for lobbying and capture of governments by big donors. Electoral bonds therefore will be instruments that ensure government of the few .

Non- disclosure to Election Commission While RoPA,1951 specifies that donations received by political parties in sums greater than Rs 20,000 be disclosed to the tax authorities, the Finance Bill,2017 explicitly provides an exemption from this clause to electoral bonds. This mars the very purpose of cleaning up electoral finance.

Not enough secrecy Another concern raised by political parties against electoral bonds is that the incumbent government can easily find out donor details using KYC details shared with banks. This could make the instruments unpopular.

Further the scheme was introduced through Finance bill,2017 and as such was not debated in the upper house.

What further reforms are needed in Indian Electoral Finance?

Electoral bonds are one of a kind instrument introduced in the country to clean up the political system. While they raise concerns, they are better than cash and introduce more transparency in electoral finance. The need is to pair them with other reforms needed in the electoral system to bring down the role of money power in Indian politics. #KhabarLive